The joke writes itself. Two basketball schools playing a football game in a baseball stadium. But that’s such a lazy take, and completely ignores the incredible work of two men who have taken tremendous strides to shed the label of “basketball school” … Duke head coach David Cutcliffe, and Indiana head coach Tom Crean. 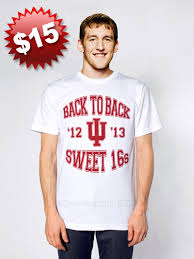 Let’s be honest, Indiana isn’t really a basketball school anymore. Indiana as a basketball school is like American Idol as a pop culture institution, only American Idol hadn’t premiered yet the last time Indiana was in a Final Four. And it’s not like they didn’t cheat their asses off to try to make it back to a Final Four either. In 2006, they hired former Oklahoma coach Kelvin Sampson (who was on the market after being fired for cheating at Oklahoma) who then shockingly cheated again at Indiana. Twice. Even worse, when Sampson was let go, former Hoosier great Dan Dakich took over as the interim head coach and ended up with a 3-4 record, leading him to his current career as a professional troll on ESPN’s “C” broadcast team for college basketball. That leads us to Tom Crean, who is now mostly famous for sending creepy DM tweets, cutting down nets after losses, and for being an instant meme because of facial expressions like the one below.

But enough about Indiana basketball, as there’s a football game to be played. Indiana’s last bowl appearance was in 2007 when the Hoosiers lost in the Insight Bowl. Other than that, there’s not much to talk about. They lost some close games this year to some good teams, so they’ve got that going for them. They have a 1,000 yard rusher who ran the ball for 35 times and 238 yards in an overtime loss to Michigan. Their head coach had some not-so-kind words for Wake Forest earlier this season when he said “I’m a Southern Baptist but I don’t like the Demon Deacons. We’re going to kick their ass.” This comment marked the first time any single comment included the two phrases “I’m a Southern Baptist” and “kick their ass,” and also should serve as bulletin board material for the Blue Devils who will absolutely be looking to avenge the 31-24 “ass kicking” in Winston-Salem, as promised by the Hoosiers.

The school itself has a rich history with many well-known alums. Jonathan Banks, best known as Mike Ehrmantraut from Breaking Bad and Better Call Saul, is an IU alum. Famous sports broadcaster Dick Enberg is an Indiana man, as is reality TV actor Mark Cuban. The Million Dollar Man, Lee Majors went to Indiana, as did ESPN anchor Sage Steele. Former Subway spokesman and current incarcerated monster Jared Fogle went to Indiana, and while we won’t make fun of IU for being associated with Fogle, we’ll certainly clown the University for still listing him as a famous Hoosier.

What is a Hoosier, anyway?

Oh, okay, that clears it up. But seriously, the origins of the word have been traced back to Indiana poet John Finley’s 1833 work “The Hoosier’s Nest”, and was believed to be common slang by historians who have researched the word simply because the term was used without explanation and “in a manner that suggests the term was understood by his readers.”  To summarize, the term “Hoosiers” was adopted because it was used once a long time ago in a way that seemed like the guy knew what he was talking about, so it just stuck and continues to be used today because no one took the time to question it. Sort of like how we still call Indiana a basketball school, I guess.