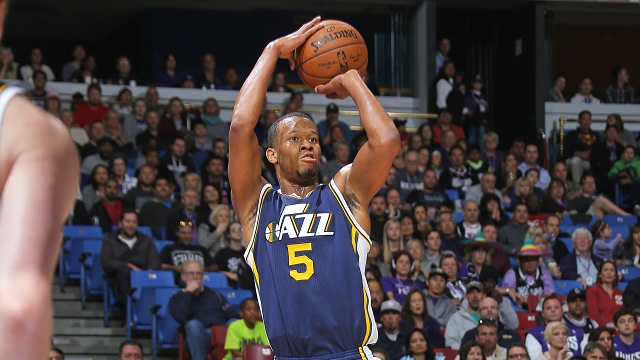 If this feels like it was years ago, well, that’s because it was! But a lot has changed for Hood in the past 23 months; in case you haven’t been paying attention (you probably haven’t, which is totally okay), the second-year pro has become a player for the Utah Jazz — one of the hottest teams in the NBA.

The Jazz of coach Quinn Snyder entered the season as the second youngest team in the NBA — behind only the Hennessy Youngman-inspired Philadelphia 76ers. They’ve scrambled to put together a competent point guard rotation after losing Dante Exum for the season to a torn ACL in his left knee. The team even had to stomach injuries to prized young big fellas Derrick Favors and Rudy Gobert, who have missed a combined 37 games. Despite the difficulties, the Jazz have won six straight games — usurping Portland for the No. 8 spot in the crowded Western Conference, pushing Houston for seventh — and Hood is a big reason for the team’s push for the playoffs.

After a stellar rookie campaign, which saw the Jazz narrowly miss out on the playoffs after going 20-11 down the stretch (the former Blue Devil averaged 12 points while shooting 42 percent from deep his final 16 games), Hood has improved upon his play across the board in 2015-16. Take a look at the obvious: 14.6 points (third on the team), 36.4 percent shooting on threes, and 2.6 assists. His minutes are up, too — as is his usage (22.1 percent) and efficiency: 14.6 PER and 55 true shooting percentage.

Hood is more than just a 3-and-D guy, though, and in more ways than one. He’s shooting well at the rim, and he’s become a good above the break three-point shooter. Here’s his shot chart: 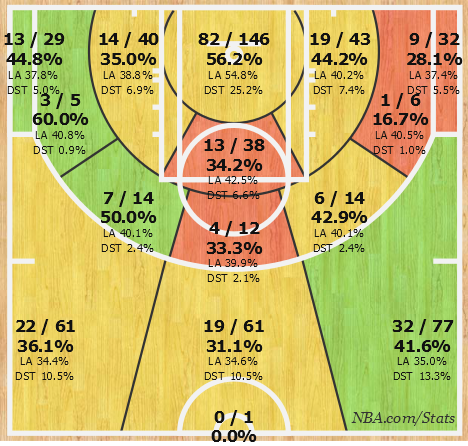 As I stated above, Utah’s point guard situation has been…suboptimal this year. Raul Neto has been steady if nothing else, and Trey Burke has at least given them some scoring punch off the bench, but this team’s offense is clicking at its best when one of their star wings —  Gordon Hayward or Hood — is running the show. Hayward is the borderline All-Star, who has received invites to participate with Team USA basketball, but it has also become a nightly occurrence to see Hood directing Utah’s offense — a slow but fringe top-ten unit, according to Basketball-Reference — during crunch time.

Hood hasn’t even played two full seasons, but he’s become one of the top isolation players in the league. Among players who have recorded at least 50 isolation plays this season, Hood ranks inside the top ten in points per possession: 1.04. Want to guess who else scores 1.04 points per iso possession? Answer: Wardell Stephen Curry. Have you ever heard of him? He’s not bad at the basketballs, too, I think. Not sure, though. Someone please get back to me on this ASAP. Let me know. Thanks.

As I’ve noted in this space a lot the last few months, the contemporary NBA offense is predicated on spacing and shooting off of high ball screens — unless you’re the Los Angeles Laker. Spacing can frequently get sticky for the Jazz; Gobert and Favors are both really good players — and menaces on the defensive end — but their offensive skills and preferred areas of operation overlap. This is why having two wings like Hood and Hayward is so vital.

Utah’s most used lineup — Neto, Hayward, Hood, Favors and Gobert — has played 233 minutes together this season; in that time, they’ve outscored opponents by 11.1 points per 100 possessions. With Gobert and Favors protecting the rim, that five-man group yields only 94.2 points per 100 possessions — this is dominating. It would also rank as the No. 1 defense in the league — ahead of historically good San Antonio.

However, the Jazz’s most dynamic offensive lineup presents itself when Neto is replaced with Alec Burks — another crafty wing with a scoring knack. Hood and Hayward are given the keys to Snyder’s plodding car (Utah ranks last in pace), and man, do they perform. This group has scored 1.24 points per possession. This is an impressive statistic, especially considering the fact that Gobert and Favors — as good as they are — offer up little as far as shooting. Gobert’s range doesn’t extend beyond his enormous wingspan; Favors is a decent mid-range shooter, but he’ll never be confused for Dirk.

Back to Hood, though: in 48 games this season, he’s been the ball handler in 216 pick-and-rolls, according to NBA.com. With Hood pounding the rock, Utah scores .92 points per possession — tied with the pterodactyl that is Kawhi Leonard. For the record, Curry leads the league in this metric (1.09 points per possession); maybe he is kinda decent at this game.

(By the way, this is Steph Curry: You set out to write about someone else’s awesomeness, and you can’t help but admiring Chef Curry. What a time to be alive.)

During his one season of game action at Duke, Hood was often cast as Jabari Parker’s sidekick. This made sense: Parker was sensational, and nearly won ACC player of the year as a freshman. However, it’s Hood who has gotten off to the faster start in the NBA. That’s not entirely fair, and it’s not meant to critique Parker; he’s nearly three years younger than Hood, and he missed almost all of his rookie season after tearing his ACL. And while he’s put up some decent numbers in 2015-16, playing for a funky Milwaukee Bucks team, Parker hasn’t even found his position in the professional ranks — let alone an identity. The same, however, can’t be said about Hood.

The lefty has increased his free throw rate — but he’s still attempting fewer than three free throws per game. When he does get to the stripe, he knocking down 88.1 percent of his attempts — No. 12 in the freaking NBA. This is one of the next steps for him; if Hood can draw more fouls, he gets more easy points — and in the process becomes a more efficient player.

Tuesday night the Jazz will go for their seventh-straight win on the road against Dirk Nowitzki and the Dallas Mavericks. When you get a chance, check out Hood — please don’t wait for the next Internet dance.