If you missed it last night, go check the tape. A huge play between two OK to good football teams occurred in winston-salem. no one knows for sure, but SC8 Investig8s – Was Emezie in?

NC State was driving late in the fourth quarter against Wake Forest, moving the ball at will. They had 1st and 10 from the Wake Forest 11 with just under 2 minutes remaining in the game. They were trailing 30-24 after just allowing Wake Forest to score on their previous possession. Emeka Emezie, who had already caught a tremendous touchdown catch earlier in the game, was alone on the left side of the formation.

Finley finds a wide-open Emezie, who makes a brilliant move to cut inside of two Wake Forest defensive backs who completely misplayed this, defensively. Emezie surges forward, heading to what looks like a clear touchdown. Wake’s Demetrius Kemp is closing in from Emezie’s right while the two lame-duck defenders to his left try to pull their pants up. Emezie senses contact and extends the football towards the goal line. Kemp manages to hit Emezie on the elbow and the ball squirts loose into the end zone. Wake recovers. The officials, without conferring, quickly signal touchback and award the ball to Wake Forest.

The play is immediately whistled for a review, but we’re not sure why. Less than a minute passes before Greensboro confirms the call on the field. There are no pylon cameras and not a single cameraman could be bothered to line himself up down the goal line or ever near it. Every angle is inconclusive. Thankfully, SportsChannel8 has the technology to find the truth.

Three angles of the incident right at the point of contact between Emezie and Kemp are shown here: 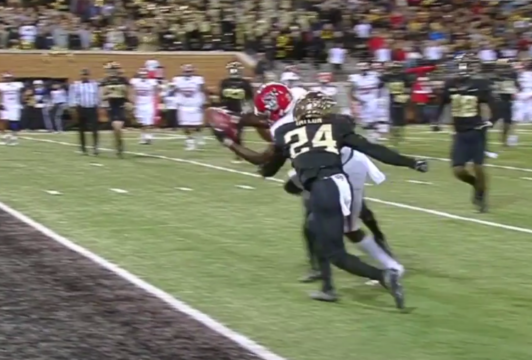 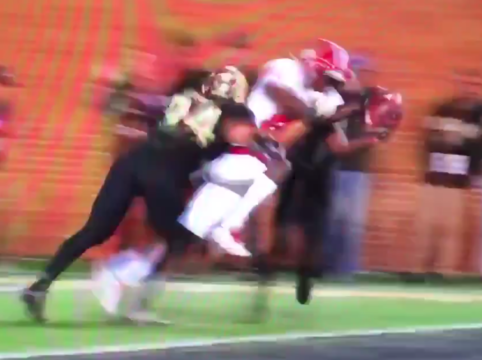 And here are the official SportsChannel8 EyeR8 Enhancments® of those same images. We’ll allow you to reach the obvious conclusion once you see them: 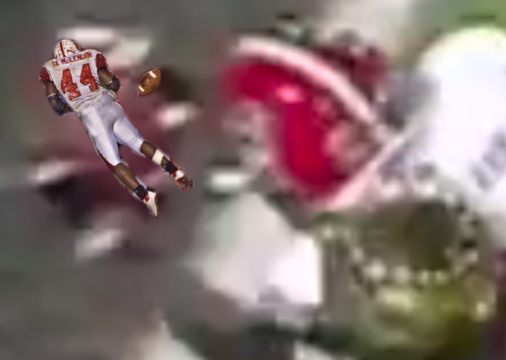