It was fitting that my favorite play of the college football season occurred in the ACC championship game; I loved everything about this brief moment of insanity. With Clemson clinging to a slight 14-9 lead late in the first half, and facing a 4th-and-15 in their own territory, Andy Teasdall decided to channel his inner J.R. Smith and make a run for it, which caught everyone by surprise (much to my delight), including his coach, Dabo Swinney. Enjoy:

The best part, I swear, is that he cocks the football for a split second like he might actually throw it (Go deep, you guys!). He was of course reamed out on the sideline immediately by Swinney following the play, but in defense of his bravado: WHOLE LOTTA GREEN OUT TO THE LEFT THERE, COACH.

My buddy Dave and I grew up in Winston-Salem with Teasdall; Dave was actually the punter’s “big buddy” in 5th grade and when Teasdall was in kindergarten — a peer-to-peer mentorship program at their elementary school. When asked for comment Sunday morning, Dave — a UNC graduate —  was beaming, “Made me proud. He needed one block and he probably could have made it.” If Clemson ended up losing because of this play, I was really hoping we could trace their failure back to Dave. But alas.

We salute you, Teasdall. Even if it should come as no surprise a graduate of RJ Reynolds High School made a silly, bonehead play.

Before kickoff at Bank of America Stadium, there was plenty of action taking place outside of BOFA. Around two hours before kick, an impromptu game of three-card monte broke out a mere chip shot away from the Panthers home stadium.

After running low on funds, and without a house to mortgage, we had to lay down whatever we could to stay in the action. You do whatcha gotta do, yanno. Thankfully, we were still somehow able to make it into the stadium despite taking the unfortunate L.

Trying to figure out how to tell our boss we lost our #ACCFCG credential in this 3 Card Monte game outside BOFA. pic.twitter.com/bsSWc0c789

Say what you will about the horribly awkward fake punts, inefficient quarterback play, whatever — this was a fun title bout filled with what Stat Boi loves most: scoring.

Marquise Williams and the absurdly good Deshaun Watson combined for 513 yards passing and six touchdowns. In the opening week of the season, Watson lost his top receiving threat — Mike Williams — to a scary and unlikely injury. Despite that loss, Watson’s been the top player in the ACC all season, and he saved one of his best performances for Saturday night in Charlotte — when he helped his team clinch a birth in the second annual College Football Playoff. It’s fun to watch Watson at the controls of the offense, especially when he’s running effortlessly through a defense — Russell Wilson style.

Watson wasn’t the only sensational sophomore on the pitch for the Tigers, though: running back Wayne Gallman was a workhorse, who destroyed the Tar Heels defense in the second half. He toted the rock 28 times for 187 yards — with 165 yards coming after halftime. He also added 68 yards receiving and another score through the air. Seriously, Gallman was a hoss in the final 30.

And yo, tip of the cap to Quise Williams. I’m sure there are plenty of fans who will rail against this dude, and clamor for Mitch Trubisky in the team’s bowl game. And Williams may have had a couple of costly turnovers, including another red zone interception. However, he was running for his life most of the game from one of the best defenses and front sevens in the entire nation. There will be plenty of critics, but Williams still accumulated over 300 yards of total offense and four scores. His performance was far from efficient, but he had the Heels within one possession of the No. 1 team in the nation with only minutes to go in the fourth.

After the game, Williams walked past me in the halls of the stadium; his uniform was 17 different colors and he was noticeably limping. The senior QB led UNC to their best season in over 30 years, and last night he played his freaking heart out — even if he did pull a Chuck Knoblauch a few too many times.

4. ACC Refs Not Trying to Mess With the Money 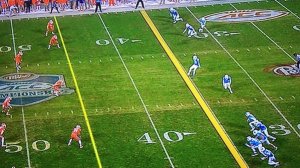 5. A Growing Sense of Maturity

I’ve long been a fan of the move Marshawn Lynched pulled back in 2006 at Cal, following a victory over Washington. By now, you’ve all seen the gif or video of this at some point in time, but for a refresher course…

In the waining seconds of regulation, a moment to recreate this masterpiece presented itself when we spied an unattended injury cart: 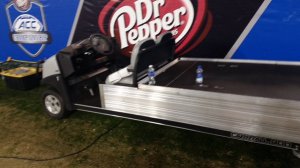 As tempting as it may have been to go for our very own joyride around BOFA, we had to remember that we’re a reputable news source and we need to act professio—AH GOD, I blew it, didn’t I? There’s always next year, I suppose.