Oh, your sports media outlet doesn’t have an actual meteorologist on staff? Ours does, and Weather Moose is here to provide a look at a possible winter storm in Brooklyn.

The long-range forecasts had been hinting at a colder period at the beginning of March for the eastern US weeks before the ACC Tournament started. It wasn’t until the last few days that the potential for a damaging nor’easter began to take shape. Let’s take a closer look at the potential for snowfall and how it might impact some media members’ travel plans.

A mix of rain and snow will begin across southeastern NY late tonight between midnight and 2AM Wednesday morning. Snow will expand and increase throughout the day on Wednesday. The heaviest snowfall is expected late morning through mid afternoon before tapering off in the evening. Precipitation will have ended between midnight Wed and 2AM Thursday.

This is the tricky part and always will be with coastal systems. There is significant spread in model forecasts of snowfall in the area. Some (nefarious) models suggest as much as two feet in the NYC metro area, but some have mostly rain with a trace amount of snowfall. In actuality, it’ll probably be somewhere in the middle of that. For Brooklyn, snowfall amounts of 5-9″ are expected, which will be enough of a hindrance. 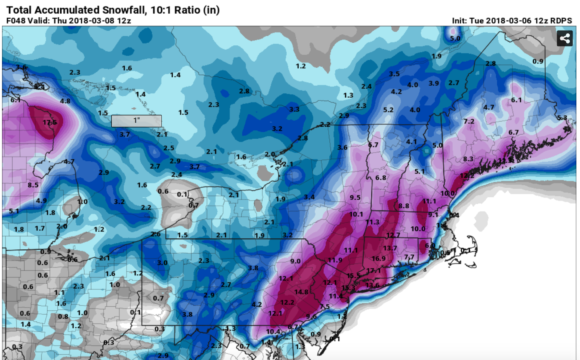 If you waited to arrive at Barclay’s on Wednesday, well…let’s just say you’re being punished for purposefully avoiding the Boston College-Georgia Tech tipoff. Flight traffic in and out of the New York area saw delays on Monday and you can expect more of the same or worse conditions on Wednesday. So expect to spend a lot of time in the airport, but just know that we’re here for you. If you’re coming from RDU, there are great spots to grab a beer and fire off a tweet about being stranded. Even better if you tag your airline complaining about weather issues outside their control.