Airius Moore intercepted a pass in the end zone at the end of the fourth quarter, otherwise it would’ve been 37-27.

Wolfpack responded well in the second half and still have a shot at a successful season.

Can NC State make a bowl? It’s hard when you continually beat yourself on special teams, can’t get a rush with what was expected to be a stout front four, have an inability to run the ball, and can’t cover anyone in the secondary. Other than that, they’re golden. 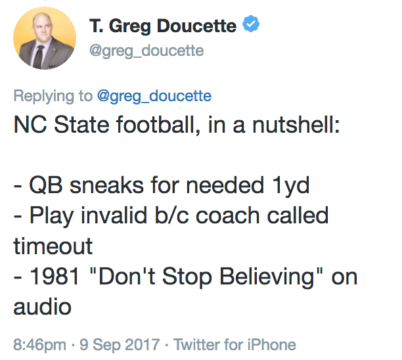 Jaylen Samuels is a dynamic playmaker. And that was extremely evident on this circus catch in the third quarter:

What. A. Catch Jaylen Samuels pic.twitter.com/X2Eanri4pQ