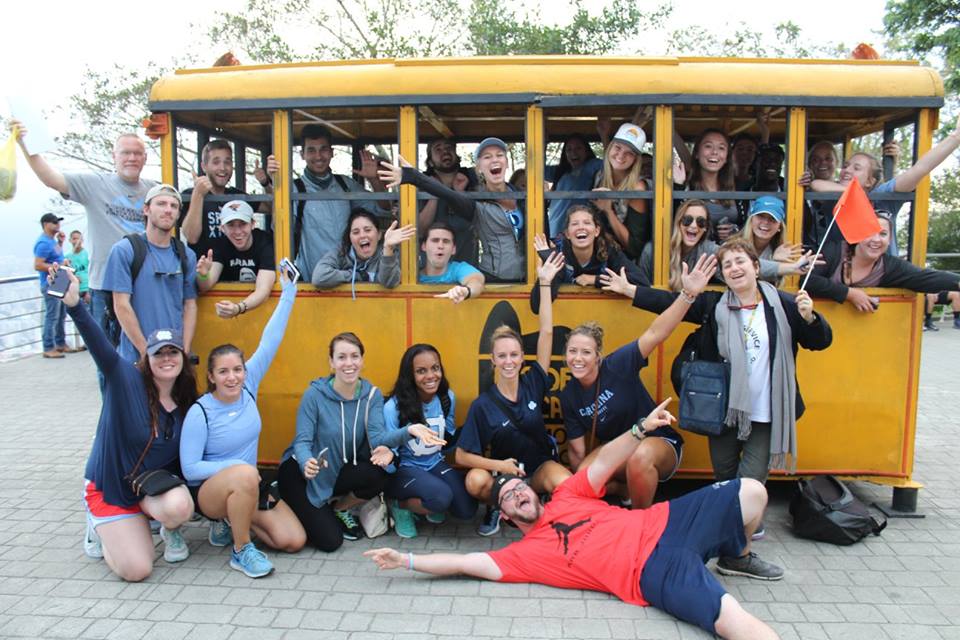 When you go abroad, the friends you make are as important as the memories you make.

That’s something I’ve learned from various family members and friends when they’ve returned from foreign countries, and it’s something that I’ve already begun to grasp after two days in Rio di Janeiro preparing to cover the Olympics.

UNC-Chapel Hill sent 29 people in total to Rio: 25 to work for the Olympic News Service, four to freelance about the Games for different outlets throughout North Carolina. Out of the 28 other people coming, I knew maybe half through Sports Xtra or other J-School ventures. 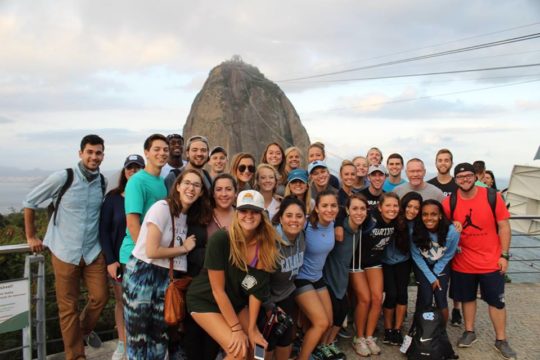 A whole bunch of old and new friends who took 45 minutes to order food and drinks at a Brazilian bar.

That left about a dozen people that I’d be traveling out of the country with that were practically strangers, and that’s what makes the day I had on Saturday even more unbelievable.

It’s hard to get to know so many people in a day, especially when your natural tendencies (at least mine) are to fall back with friends you already know.

It’s amazing how quickly a day can change that. Between trips to Christ the Redeemer and Sugarloaf Mountain, I bonded with virtually everybody I hadn’t known on the trip, and it was amazing. Learning about people, where they’re from, fun facts like irrational fears of eggs and mutual friends you had no idea you had.

In the span of 24 hours, I went from maybe-possibly-probably-not-knowing these people’s first names/faces to sitting in a circle in a room at the Olympics Media Village, laughing at each other’s expense in a game of Impressions (and your humble author being wrongfully accused by most people in the room of doing the most drugs).

When you leave your country for the first time, culture shock and homesickness can quickly become real things that infect every second of your time away.

Each interaction with these people has led to me believing I’m going to experience even more of that shock and sadness when we part ways in three weeks.

There are two different Rios.

That’s my immediate takeaway from the city itself after two days of adapting and exploring the Marvelous City on my trip to cover the Olympics. There’s a Rio that the city wants you to see, but below the breathtaking facade the city displays, there is a completely different world.

You’re going to see breathtaking sights like the shore of the Copacabana, the magnificence of Christ the Redeemer and the natural wonder of Sugarloaf Mountain. That’s the Rio we saw Saturday, and that’s the Rio that will be featured prominently on broadcasts of the Olympics for the next month.

What you won’t see, and what Rio doesn’t want you to see, is the very real and discomforting poverty that surrounds the city. In fact, Olympic coordinators have basically admitted this, putting up branded walls on the way from the airport to the heart of the city that hide the slums that have gone virtually ignored in the build-up to the Games. 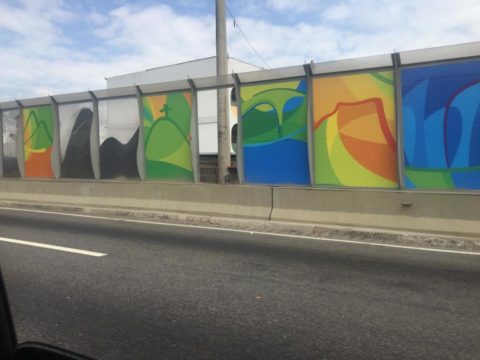 The walls you can find on the way out of Rio’s international airport, which may or may not be branded depending on what lies behind them.

The walls exist to allegedly keep sounds of the highway out of the neighborhoods, but conveniently enough, the branding disappears in favor of clear glass when you pass new buildings.

The parts of Rio that you likely won’t see are unique in their own way.

Buildings are painted in faded neons and pastels, similar to any amusement park you’d find commonly in America. Graffiti covers seemingly every square inch of wall in the city. Houses and businesses commonly line their walls with razor wire to keep trespassers out.

Street vendors walk between lanes of traffic with towels and snacks at stoplights, trying their hardest to pressure you into a purchase. Stores, depending on what part of the city you find yourself in, aren’t like the stores you’d find in America; they’re more like outdoor malls, wide open until closing time when a garage door is pulled down to protect their goods.

During the day, these areas can be hectic and slightly intimidating, but once the sun falls, they become frightening. Less people are out, it’s harder to recognize landmarks, and the looks that a group of 29 American college students get from the people who actually live here are concerning, to say the least.

That’s not to say it’s all horrible or even far from home. During a 20-minute span of our ride to Christ the Redeemer yesterday, I experienced similar locales to Charlotte, Myrtle Beach and Sylva, because Rio’s geography and layout is so absurd. The set-up of Copacabana Beach, along with the ridiculous tides, was fascinating, and behind it stood beautiful mountains reaching past the clouds. It’s like North Carolina’s cliche beloved features balled into one sprawling metropolis.

So when you’re watching the Olympics on television at home this month, take all of those sights in. Just understand that Rio is a tale of two cities, and you’ll only hear the more fortunate one.