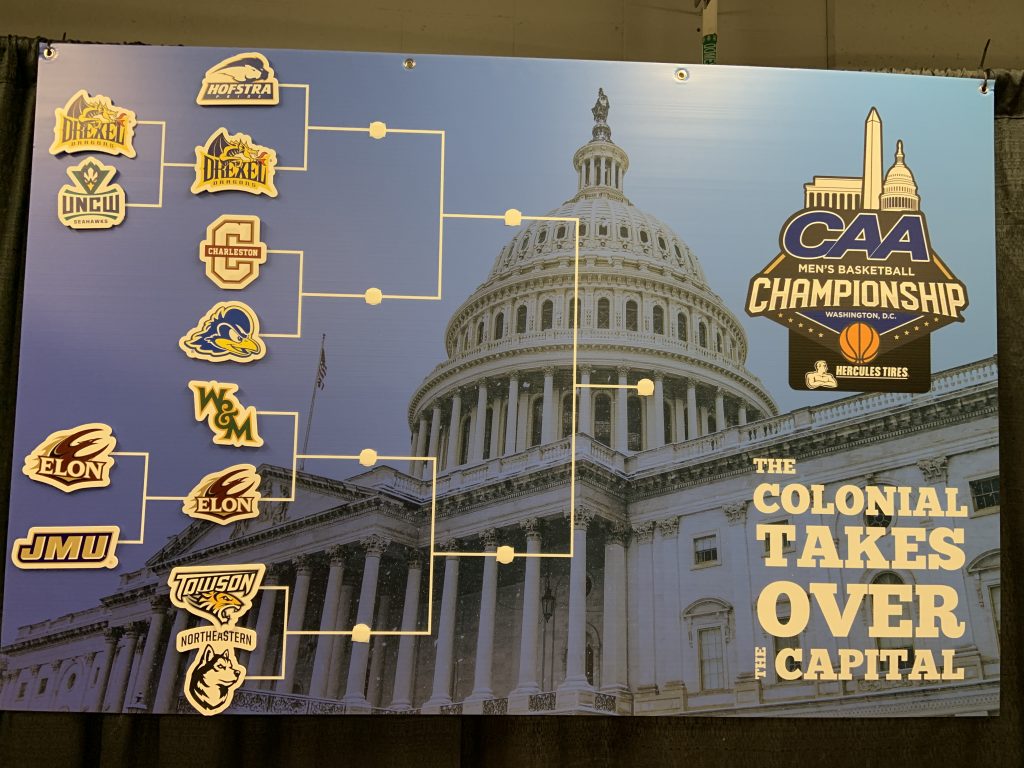 With his floor general and CAA Rookie of the Year, Hunter McIntosh, having just fouled out, Elon head coach Mike Schrage decided it was time for him to take the game over himself. That’s no easy task for a man who’s confined to the sidelines, but last night, Schrage proved that he knows which strings to pull to get his team to perform, no matter who’s available.

After McIntosh’s fifth foul, JMU’s Darius Banks split a pair of free throws to give the Dukes a 61-56 lead with 1:47 remaining. From there, Mike Schrage orchestrated a 7-0 run to close the game and earn his team its first CAA Tournament win since 2015.

The run began innocently enough. From his spot on the sideline, Schrage called a set play for Kris Wooten, a sophomore sharpshooter from Kinston. On a typical night, Wooten is probably the fourth or fifth scoring option, but in this moment, he was Schrage’s guy. Wooten ran around a screen from Federico Poser, caught a pass from Marcus Sheffield on the right-wing and fired in a long 3-pointer. Credit Schrage for that play call (and of course, Wooten for making the shot). Two-point game. 1:39 remaining.

All season long, Mike Schrage’s been preaching that the personality of this team needs to start on the defensive end of the floor. Elon showed some personality on the ensuing JMU possession. 30 seconds of great defense forced a JMU shot clock violation. Elon ball. 1:02 remaining and a chance to tie or take the lead.

Marcus Sheffield drew a foul on the next Elon possession, which set up an opportunity to run a play from baseline out of bounds. Timeout Elon. The Schrage “takeover” continued as he drew up a great play that led to a game-tying Sheffield dunk with 47 seconds remaining.

SHEFF THROW IT DOWN AND WE'RE ALL TIED UP!!!! 😤#Team107 #HeatRises🔥 pic.twitter.com/oxBDpIsb7w

After another defensive stop for the Phoenix (there’s Schrage showing off that personality of his again), Elon got the ball in a tie game with 23 seconds remaining and a chance to win it at the horn.

Who else but Marcus Sheffield? The graduate transfer from Stanford. The guy who – frankly – has no business playing at a school like Elon; a guy who was contacted by many bigger-name schools upon entering the transfer portal. But Elon has Mike Schrage, who’s known Shef for seven years, beginning back when he was an assistant under Johnny Dawkins and the Cardinal. Shef is at Elon because of Mike Schrage and the trust they’ve built with one another. Schrage lets “Shef be Shef,” and Shef being Shef is exactly what happened next:

“It’s no secret. I don’t care if the whole world knows. I’m going to Marcus Sheffield,” Schrage said postgame. “I believe in him so much as a player in any moment.”

The set play for Wooten. The BLOB play for Shef. The clutch defensive toughness. The relationship Schrage’s built with Shef over the years to trust him to make a play, despite a 2-14 shooting performance during the first 39 minutes of the game. Yes, the players make the plays, but there’s no way Elon wins last night without Mike Schrage completely taking the game over from the sidelines.

The Phoenix is still alive in the CAA. Nothing to lose now. Might as well take over.