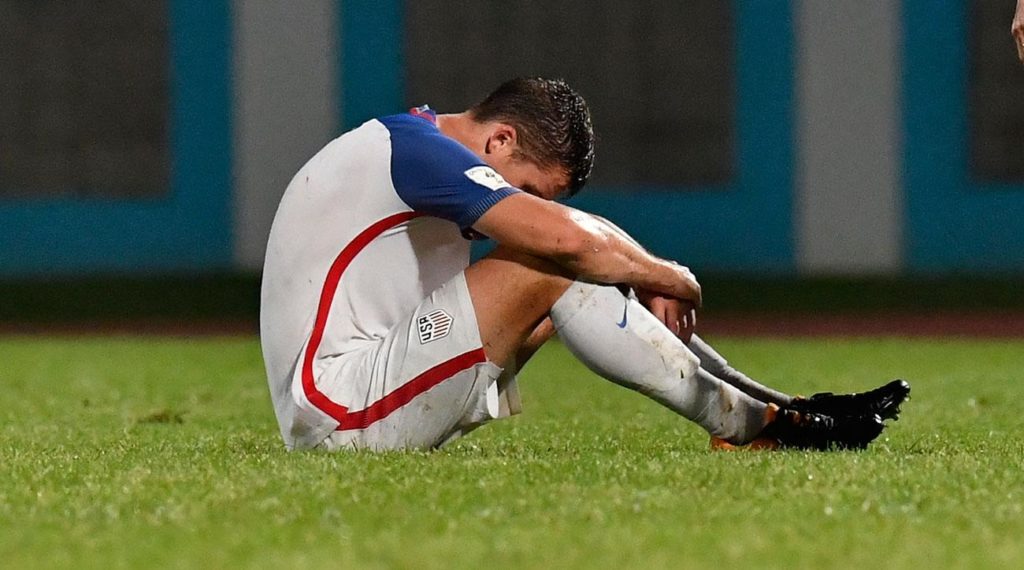 Admitting you have a problem is the first step to recovery. When US Men’s National Team coach Bruce Arena and US Soccer president Sunil Gulati had that opportunity following an embarrassing loss to Trinidad & Tobago, both chose to downplay the existence of a problem. Perhaps that’s why we’re here. While Gulati and Arena aren’t the cause of the problem, their arrogance (or cluelessness) is a perfect illustration of why US soccer won’t be fielding a team in the 2018 World Cup.

Jurgen Klinsmann tried to warn us. While his constant criticism of US soccer rubbed many the wrong way, in the end, he was right about everything. Klinsmann rightfully lost his job because he seemed to have no clue what to do to prepare for, or adjust to, competition, but the soccer community rallied around his ousting like it was a message to anyone who dared to criticize American soccer. And yet here we are, out of the World Cup, and the two men in charge telling us it’s a game of inches and that sweeping changes would be foolish. Get out of here. Literally.

Here’s what needs to happen to make sure this never happens again.

What makes this so embarrassing is that we never saw it coming. This is a direct product of US Soccer’s refusal to recognize the threat of missing the World Cup. Mistakes weren’t made. There wasn’t some colossal blunder that led to a sudden reversal of fortune. This wasn’t a hard-fought run derailed by laying an egg in the one game we had to win. This wasn’t a failed final exam that counted 70% of the grade. This was the equivalent of knowing that you need a D to graduate, showing up for class three times during the semester, not studying for the final and still expecting to pass because your family donates money to the school.

The absolute worst thing that can happen right now is to repeat it by pretending this isn’t a big deal, or that it can’t happen again.

Gulati has to be out, and not just because of this. But there’s no escaping this. He’s done. Arena has to go with him. Arena should be gone immediately. The US Soccer presidential election is this winter.

Be creative about it. Don’t put together a committee that features Alexi Lalas, Taylor Twellman and Landon Donovan. Go into the business world and pull in actual, accomplished leaders. Form a multi-national group. Bring in retired military. Harness this group’s diverse experience in building successful organizations and trust their input.

Put a new president of US Soccer in place and build a committee of soccer experts to carry out the plans set in place by the task force. The committee needs to include all levels of soccer in the United States. The Men’s and Women’s national teams, Major League Soccer, the NWSL, representatives from every lower professional league, US Youth Soccer, and Nike. Everyone needs to be on the same page working towards a single mission.

There are so many stupid traditions in soccer that accomplish nothing more than continuing tradition. In competition, 11 players start, and 3 subs are allowed to replace them. Nothing is more useless than the never-ending hand-wringing over which player in the National Team pool is 26th (on the roster) or 27th (off of the roster). Just because “that’s what national programs do” doesn’t mean we should do it. Who cares?

The next World Cup we’ll be eligible for is in 2022, five years from now. If the US Men’s National program focuses on identifying and developing the top 18 outfield players and the top 2 goalkeepers who are between the ages of 17 and 25 today, we’ll be ahead of the rest of the world who continues to honor this stupid “national pool” tradition. And it’s not hard to do. We’re not talking about combing each middle school across America to find the next hidden Messi. We’re talking about identifying the top 20 players who are in professional soccer right now, today. Pull that group together and allow them to define and understand roles, and let them grow together as a cohesive team through competition – even if it’s a “meaningless” Gold Cup.

Instead of putting so much focus on having a deep pool at the full national level, use the U20 and U17 teams as the experimental teams. If there’s a 22 year old player who is not clearly one of the best 20 US players right now today, cut ties. Build your depth with youth. Stop spending resources on players who aren’t going to be impact players in international competition.

We’re a smart country, so let’s put that intelligence to work. Use analytics to truly study and understand the impact of our domestic leagues. Are our best players developing domestically? Are CONCACAF’s best players benefitting too much from playing in the MLS? Should we be putting caps on how many foreign players should be on MLS rosters? I don’t know the answer to any of these questions, but there’s no way we can’t find out through data, avoiding knee-jerk defenses or attacks on the merit of Major League Soccer.

US Soccer should identify a group of metropolitan areas in each state (again, using analytics), and select one designated youth organization in those areas to enter one boys’ and one girls’ team, u14 through u16, to play in a clearly-defined “top flight” regional league. Those teams should be fully funded by US Soccer, and it should cost families $0 to play for those teams. Clubs will continue to create fictional “elite” level teams because no one loves buying their way onto top teams like soccer parents, but there needs to be one undisputed top level of youth soccer where truly the best players play. All other levels should be labeled as recreational levels, but with varying time, cost and travel commitments. In short, youth soccer needs to be significantly scaled back and simplified.

Why not until u14? Because kids should be kids and should learn to love sports instead of learning to love recognition. Why not after u16? Because if you’re 17 and good enough to be in consideration for the national team, you should be playing professionally.

9 – US Soccer HAS to preach the dangers of specialization

30 of 32 first round picks in the NFL draft played multiple sports in high school. Sure, youth pay-for-play football isn’t a large industry, but college football is, and coaches consistently look for multi-sport athletes. USA Hockey, a similar structure to US Soccer, distributes materials to every registered youth player encouraging them to play other sports, and mandates limitations on the season-length of approved youth programs to allow kids to play other sports. Youth soccer, on the other hand, actively limits opportunities for players to play other sports.

US Soccer needs to step in and stop this immediately. Our country’s best soccer players can develop into better athletes by playing other sports. American kids aren’t going to compete with international kids who spend their free time playing pick up soccer, but there’s not one single country in the world than can offer the diversity of sport that America can. We need to use that to our advantage at the youth level.

10 – Ban BEin Sport from ever broadcasting another US soccer game

You’re the most CONCACAF network in the world.