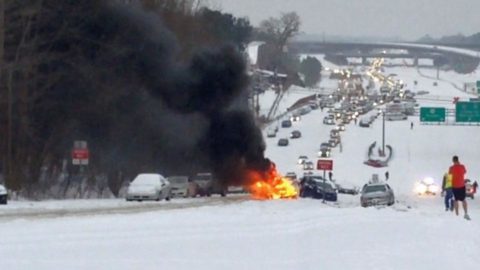 We’ve issued our official forecast for the event that will unfold over the next 24 hours or so. Check it out:

Overnight and into this morning, the models have continued trending warmer and farther northwest with the heaviest snowfall. As this has happened, an increase in expected sleet and freezing rain has occurred across eastern NC and eastern parts of the Triangle. Don’t take this decrease in snowfall totals lightly, however. We’re still expecting a significant winter event with prolonged impacts. Temperatures are going to fall into the single digits overnight Sunday and Monday, leaving us with treacherous road conditions through Tuesday morning.

The axis of heaviest snow now is projected to be from roughly Charlotte through southeastern VA, where 6-10″ of snow could occur, with locally higher amounts possible. This includes the wonderful town of Chapel Hill, where this basketball game is going to be played. Snow will begin late tonight and continue through tomorrow morning before ending early tomorrow afternoon. The roads will be a disaster and NC State has stated they’re not planning to stay in Chapel Hill tonight:

Word is that N.C. State will not be staying in Chapel Hill tonight. Current plan is to go back to Raleigh, bus back tomorrow.

And while we love Roy, we don’t respect him much when it comes to his opinion on weather-related impacts:

Roy says his confidence level is "high" that game will happen tomorrow. "I think we're going to play."

We don’t. In fact, we believe so strongly that this game will need to be postponed, we’ve pegged our “Will NC State make it to Chapel Hill?” meter at HELL NO. This indicates a high likelihood of a postponement. 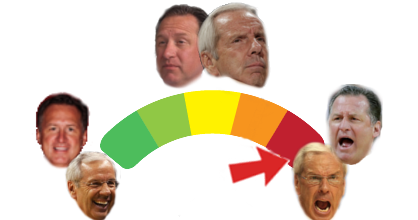 So wherever you are tonight, make sure you’re prepared to stay there for a couple of days. Avoid traveling on the roads if at all possible. Stay warm. Bring pets inside. And keep it tuned to SportsChannel8.

The latest models came in overnight and things are beginning to look a little more dire for the State/UNC game. The European model, which had been drier and warmer, has become more moist and colder. Additionally, the GFS (‘Merican) had been suppressed and is starting to shift back towards a more active snow/sleet event for central & eastern NC, primarily. The National Weather Service, as of this morning, has issued a Winter Storm Watch for much of the central part of the state beginning Friday night at 7.

Additionally, the Weather Prediction Center has increased its probability that snowfall of 6″ or greater could fall across much of central NC. 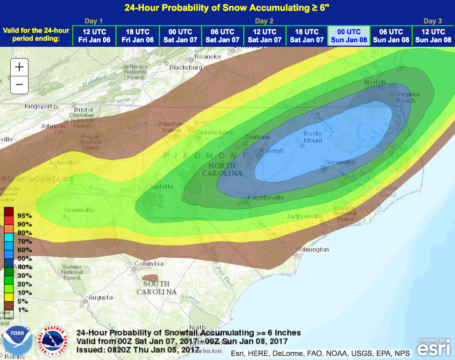 Here are a few model solutions that give you a small indication of what we’re looking at…the GFS, 4-km NAM, and the Canadian Model. I can’t show you the Euro because our weather budget at SC8 is limited. 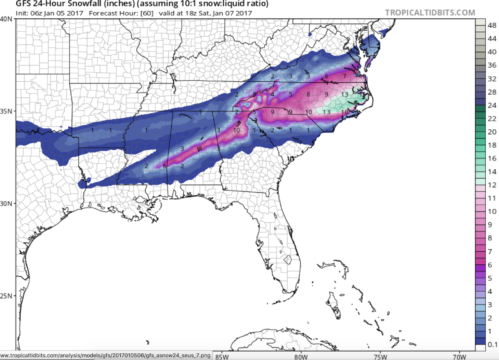 These are just guidance, so certainly not a forecast. They also don’t break out snow vs sleet, so there’s some wiggle room. But the big note is the models are consistently putting significant frozen precipitation across the state. The 12Z simulations will start coming in soon, so we’ll have more data later. There remains some uncertainty, both on the high and low ends, but for now, here’s our forecast for RDU: 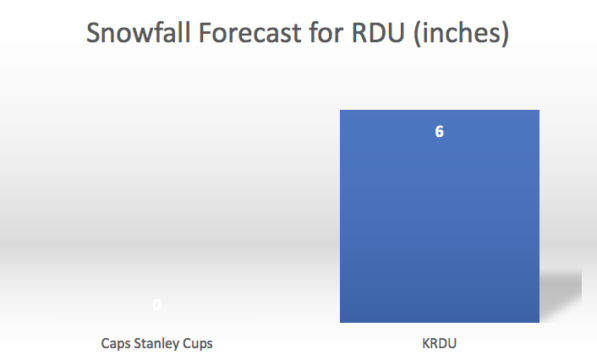 So how does that impact State at UNC? Well, we ticked our meter closer to the cancellation end. Quite frankly, if it snows this heavily, travel on Saturday is going to be very hazardous. Officials at both schools need to be having the appropriate conversations. 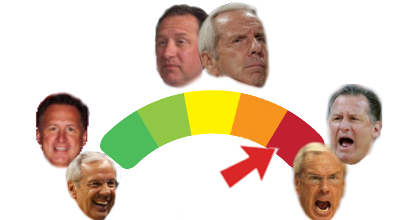 January has arrived, which means our best chance for winter weather in NC. It’s also when ACC hoops get ramped up. And one of our first major matchups is this Saturday as NC State takes on UNC. When these two get together, crazy things happen. Which begs the simplest question…

Will NC State make it to Chapel Hill Saturday?

Early this week, a global weather model predicted heavy snow in central NC this Saturday. This solution was written off as a one-time anomaly. As we’ve gotten closer to Saturday, though, it’s looking more likely we’ll have winter weather to deal with. As is typical for any winter weather event in NC, this all hinges on the path and strength of a low pressure system moving through the southeast and off the NC coast. Slight shifts in one direction or another will lead to big differences in precipitation and/or amounts.

If you take the models at their word, and you shouldn’t, we’re looking at a possible 2-6″ snow event in central & eastern NC. Some are higher and some have no snowfall at all. What makes this scenario more likely for snowfall is that cold air will be in place before the stuff starts falling. Typically, the cold air is chasing the precipitation here, so we’re left with cold rain or a mixture of snow/ice/sleet. There could be some mixing, but this is likely to predominantly be a snowfall event for much of us.

OK, nerd. But what about the game?

NC State and UNC tip off at 8pm Saturday night. The snowfall in this scenario is expected to begin late Friday and continue through Saturday afternoon. We know that in NC, any winter weather is a damned catastrophe…

Raleigh, NC (Glenwood Ave.) got way more than we bargained for…geez. THAT ONE CAR ON FIRE OMG SERIOUSLY pic.twitter.com/v6GOIparn0

I believe with enough lead time here and with a decent understanding of the situation, any significant snowfall would lead to a cancellation. Snow is expected to still be falling during the time NC State would need to travel over to Chapel Hill to prepare. And it’s supposed to be damned cold, too, which presents a threat of any melted snow freezing. If I had to peg whether or not the game goes on, I’d lean towards maybe not. And we’ve got a handy meter to keep you all up to date. 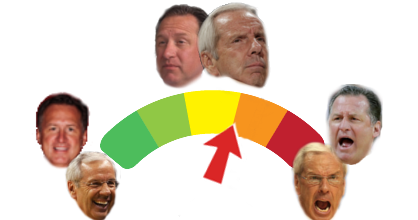 The greater the likelihood the game is postponed, the angrier Gottfried and Roy become. Conversely, they’ll be happier if it goes on as scheduled. Right now, Roy and Gott are slightly miffed about the possibility of a postponement.

But this could all be for naught. Could be no big deal. And we’ll end up doing another traffic report like this one: