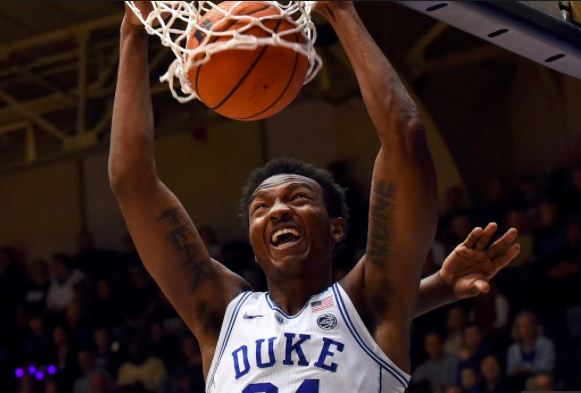 Is Duke definitely going to win the NCAA championship? No. Come on. Of course not. But we had to get you here somehow, and nothing pulls that off better than a headline saying that Duke is undoubtedly winning the NCAA championship. So what’s up? Thanks for stopping by. There’s some good stuff below on a lever or two that Duke can pull to make a title run more likely than it seems today, though.

Oh, and if you want to read about Duke losing last night to North Carolina, here you go.

I get it. Duke can’t stop a nosebleed at this point. Their season is heading off the cliff at 19-5 and 7-4 in the ACC. They’re allowing a point per possession on defense, and their efficiency margin has dropped to an alarming +22.48. There hasn’t been a National Champion with numbers that bad since … 2017. Wait, what?

But, Ben … Duke has literally sucked in ACC play while that UNC team dominated.

So Ben, I can tell everyone that Duke’s on pace to win a national championship???

Slow down, Punchy. All that means is you can roll your eyes at anyone writing “Duke is showing why they can’t win” columns today. Chances are high that those same writers weren’t saying the same about last year’s champion a year ago today. And Duke’s efficiency numbers are comparable, if not better.

If you’re looking for a “sure thing” NCAA champion, you’re watching the wrong sport. But if you’re looking to compile a list of teams who can’t win the title, you should skip right on past Duke.

3. but there are soooooo many problems

There’s A TON of conversation today about this team’s shortcomings, and most of the blame is directed toward Duke’s “new philosophy” of recruiting one-and-done talent. Let’s brush aside the reality that Duke’s only had 12 one-and-done players since their first one in 1999, and let’s also gloss over the fallacy that it’s a) a new philosophy, and b) every coach in America isn’t trying to recruit these same players year-in and year-out. This will be only the 3rd time in Duke history that Krzyzewski had multiple first-year players head to the NBA, and he won a championship in one of those two previous seasons.

Now, there are legitimate problems with throwing a team of one-year players out on the court. It takes time to learn defense. Adapting to the speed of play and the level of physicality in college basketball also takes time, especially in the ACC. Players accustomed to being “The Man” have to fit into a team. Experience is invaluable. Future NBA stars have to learn to “unpack their bags” and work to win at the college level, which is a hot topic this morning among Duke fans as Trevon Duval followed up a horrible game by retweeting a highlight dunk.

Trevon is out here just retweeting his highlights.🙃 pic.twitter.com/6GnU6h8ERl

But here’s the thing … it WAS a sick dunk, so get over it. And yes, there are a gang of issues that come with playing such an inexperienced team. But the upside is that Duke has a starting lineup of NBA players, and talent will cover most of those blemishes. With one-and-dones, there’s a short runway to fix Duke’s issues. With Selection Sunday a month away, the runway gets even shorter. But they say the best way to eat an elephant is to cut it into bite-size pieces, and with Marvin Bagley and company still on the roster, there’s no need to go after the entire elephant. A single tweak here or there puts this team where they want to be.

What are those tweaks that Duke can choose from? I got you …

Since the Boston College game, Duke is allowing 0.9 field goal attempts per possession. That means with all of the turnovers and possessions ending in free throws included, teams are still getting a shot on goal 90% of the time. Last night against UNC, for example, the Heels averaged 1.2 field goal attempts per offensive possession. That number is way too high and needs to go down. 13 points per game for Duke opponents come from 2nd chance points.

In Duke’s 5 losses, 17% of opponents’ points came from 2nd chance possessions, and the Blue Devils have attempted 38 fewer field goals than their opponents. That’s a huge swing.

5. more defensive rebounding from the guards

Here’s a fun stat. In Duke’s five losses, Blue Devil guards (including small forward Gary Trent, Jr.) have rebounded 17% of opponents’ misses. By comparison, opposing guards have rebounded 12% of those misses. A +5% showing in rebound margin isn’t going to cut it for a team that’s forcing misses but not getting rebounds.

In Duke’s 5 losses, 42% of offensive rebounds from Blue Devil opponents have come from guards.

Duke is ranked 300th out of 351 teams in forced turnover rate. If the Blue Devils are getting defensive rebounds, this isn’t a big deal. Duke is forcing a very low shooting percentage from 2 point range, and they’re slightly better than the national average in 3-point percentage allowed. But they’re only getting 70% of defensive rebounds, so if they’re not going to end the possession with a miss, they’re going to need to end possessions before the other team shoots.

Duke showed a look last night with 3 bigs (Bolden, Carter and Bagley) on the court at the same time, and they went with a 2-3 zone. I wonder if Duke mixes in that same look with a 3-2 zone, or even a 1-3-1 that they showed with Brandon Ingram’s team.

In ACC play, 21% of points allowed by Duke are points off of turnovers. Duke’s 9th in the league in turnover rate, so there’s an opportunity to get better there. The way Duke scores and the way they defend in the half-court, each turnover becomes nearly a 2 point swing. Duke’s lost their 5 games by a total of 24 points.

Just like there’s good cholesterol and bad cholesterol, there are good and bad turnovers. Turnovers in transition trying to make a play, Duke can live with those. The reward is high while the risk is small.

It’s the turnovers where guards are driving the lane from the point that have to go away because the Blue Devils end up with four, or even 5 players beneath the free-throw line extended. With a big lineup, it’s too much to ask those guys to chase down fast breaks. Duke’s turnovers should be limited to fast breaks and post entry passes, and they need to eliminate turnovers off of the dribble.

Again, Duke doesn’t need to fix ALL of these problems. They just need to make one or two of these very attainable tweaks and they’ll become the most likely team to win the championship.