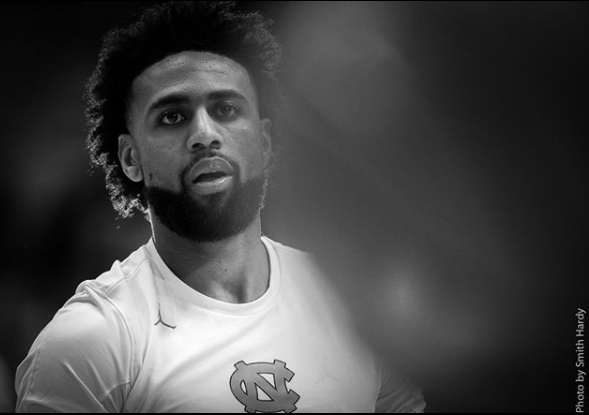 8 Things from Duke-UNC, Round 1

CHAPEL HILL — After No. 9 Duke seemingly couldn’t miss in the first half, North Carolina took control with a 16-4 run early in the second half and survived going scoreless for more than 4.5 second-half minutes. The Tar Heels won 82-78 on Thursday night despite missing 12 consecutive field goals at one point. But they made enough big shots at the end, none bigger that Cam Johnson’s 3-pointer with 3:10 left to take a six-point lead.

“Coach told us to play with our heart and our brain both,” Johnson, who had 18 points and 13 rebounds, said of Coach Roy Williams’ halftime message. “I think at times in the first half, we were playing hard but we couldn’t quite use our brain fully. So I think when we came out in the second half, especially at the beginning, we kind of put it all together.”

Kenny Williams recognized it and has mentioned it in a light-hearted manner after a few games. It’s his penchant to put up numerous points in the first half only to see that offense go away in the second half.

“I’m not worried about that, honestly,” Williams said of that second-half trend. “I just wanted to come out and be aggressive.”

He did just that and the pattern didn’t continue Thursday night. The change couldn’t have come at a better time.

“All the shots that I took, except maybe one that I can remember, were pretty much wide-open so I was just taking what they were giving me and I knocked them down tonight,” Williams said.

His six 3-pointers tied his career high, matching the six he made against Stanford earlier this season. That game typified the “second-half Kenny” phenomenon. He scored 20 of UNC’s first 26 points in the first half but failed to score (only taking one shot) after that.

This time, Williams scored seven of his 20 points in the second half. More important than shaking the “second-half Kenny” jinx is that his shot–regardless of which half he’s shooting it–has started to fall in recent games.

“I knew I would be fine and I knew I would find my touch again,” Williams said. “It wasn’t anybody in here who was doubting whether I would be able to come back from that slump I was in. Everybody believes, everybody sees it every day. Everybody expected it.”

His teammates, and Duke’s young team, helped him get off a career-high 12 3-point attempts, bettering the 11 he shot in the loss at Florida State.

“Some transition, but some of it was just moving and guys screening for me. That was it,” Williams said. “Then they had some miscommunications and that’s what got me open.”

Rebounding in second half — in more ways than one

One of the biggest reasons that Duke was in control for most of the first half was rebounding. The way Carolina turned it around is rebounding. Not with just one player but with all five players hitting the boards.

After getting outrebounded 21-16 in the first half, UNC rebounded 11 of the first 15 second-half misses to jump to a 10-point lead and force a quick Blue Devils timeout.

“Gang rebounding, that’s all it was,” said Theo Pinson, who had seven rebounds and four assists, of the rebounding difference in the second half.

Pinson said they had to have a good strategy to keep Wendell Carter Jr. and Marvin Bagley III from being dominant rebounders. Carter was held to five rebounds. Bagley pulled down 16, but only seven in the second half.

“We told them at halftime, like, me and Luke [Maye] are going to do everything we can to keep Carter and Bagley off the boards. We’re going to box them. Y’all have to come in and rebound. They rely on them two to get the rebounds, so five on two we should win that battle.”

Maye had eight rebounds but the surprising leader in that category was Cameron Johnson with 13. In the second half, UNC outrebounded Duke 28-17.

What else would be on the bucket list of Eskimos? 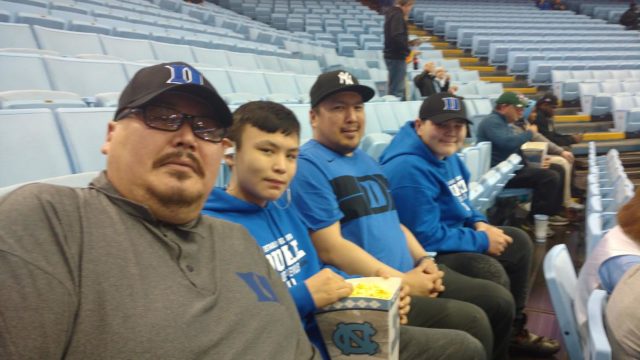 It looked odd to see four Duke fans with such good seats, midway down in the corner of the lower arena of the Smith Center, away from the seats reserved for the school. They were sitting in section 103, row L, near the Carolina pep band. Prime seats for one of the biggest regular-season games you could attend.

It’s even odder once you find out their story.

The interesting part wasn’t that Leroy Oenga, his brother and his two sons paid $750 a piece on StubHub to buy tickets. No, the oddest part is that they went to the expense of traveling from their home in Barrow, Alaska, (or as Oenga says, “the tip of the United States) to see the game.

“This is a bucket-list thing,” explains Oenga, who became a Duke fan after seeing two players from Alaska — Trajan Langdon and Carlos Boozer — play for the Blue Devils.

He wouldn’t say what the total budget of the trip was, but it was a quick trip. (He only told me how much he paid for tickets after I took photos of them from three of their phones.) The four of them arrived for their first visit to North Carolina on Wednesday and planned to travel back to Barrow on Friday.

“We’re Eskimos, we go whaling and stuff like that,” said Oenga, who is a field inspector. His brother is in maintenance.

They didn’t get the Duke win they wanted, but at least they knew they could cross this off their bucket lists. And they got a break from the weather. Temperature at game time in Barrow was 15 degrees with a wind-chill value of 5.

Interest by UNC students in men’s basketball has waned somewhat in recent years, at least in terms of the how many seek seats to games … unless the opponent is the Blue Devils.

The best evidence of that is the existence of a partial season ticket plan that has been available to the general public since the 2010–11 season. It includes every home game — except the Duke game. It helps fill seats that students don’t pick up for home games against other opponents. About 1,500 people bought that season-ticket plan, up about 500 from last season.

The reason the plan doesn’t include the Duke game is that there aren’t enough student seats to meet demand for that annual game.

There is usually one line. And that one line usually isn’t very long. Thursday there were three lines (according to the “phase’ a student is put in), one that wound around the arena, down the steps to Skipper Bowles Drive and up Kenan Drive. And that was just ONE of the lines.

No trouble finding interested students when Duke comes to town!

It’s a little different for media when Duke visits

There are many differences at the Smith Center for the media when it’s a game against Duke.

Writers who don’t normally wear ties, for some reason, decide to wear ties. Media members who don’t usually get to the arena very early arrive early. It’s the closest a regular-season game comes to a Final Four feel (without, fortunately, being played in a football stadium).

This season, the media contingent of 64, in addition to two TV crews, was spread around. Some sat in the usual three rows of tables behind the baseline closest to the UNC bench. Some sat in a booth at the top of section 110. Some sat at the new press table in the corner of the upper arena. Thirteen others had seats in the stands in the lower area because of the typically larger media turnout, which usually includes more national writers.

Similarly, for the March rematch at Cameron Indoor Stadium, some media members won’t be on press row but rather will be watching the game from the press room.

What usually is a holding room for the UNC swimming and diving team on Thursday was a “production office” for ESPN College GameDay crew. 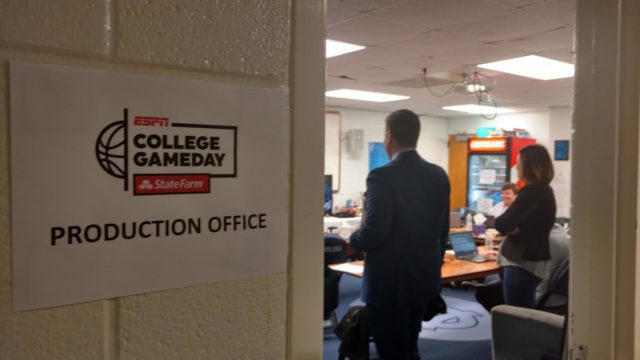 It’s a quick turnaround from one rival to another for UNC, which heads to Raleigh at 2 p.m. Saturday seeking to avenge a home loss to N.C. State just two weeks earlier. After that, it’s another quick turnaround because the Tar Heels return home to face Notre Dame on Monday night. It’s the first time Carolina has played three regular-season ACC games in a five-day span since 1980. That stretch also started with a home game against Duke and a game against the Wolfpack: the Tar Heels beat Duke 82-67 on Jan. 12, defeated Georgia Tech in Greensboro on Jan. 14 topped N.C. State at home 67-64 on Jan. 16).