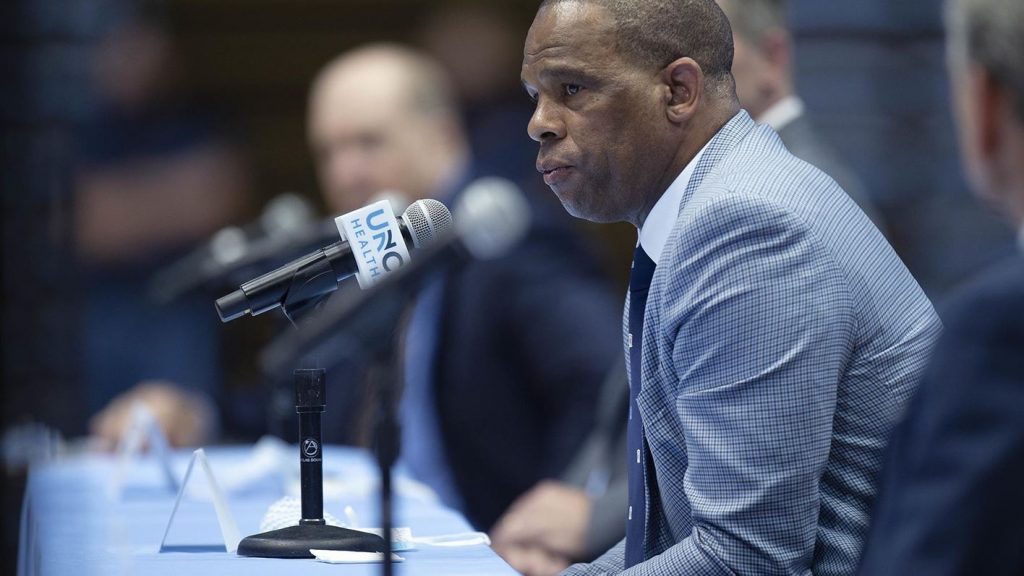 “We can win only if we convince the world that I’m doing this because you are a great ball player and a fine gentleman.” Branch Rickey spoke these words the first time he met with Jackie Robinson in 1945 when discussing Robinson breaking baseball’s segregation. Whenever color barriers are broken, such as when the nation’s oldest public university hired the first Black basketball head coach in its history, the character of the trailblazer is as important as their talent/skill. Hubert Davis recently became the head coach of the UNC men’s basketball team. And while times have changed somewhat, the necessity to pick a palatable pioneer is still a requisite. And their success or failure is still far too often a barometer for the opportunities other similarly-situated candidates will receive.

It is through this lens that Coach Davis assumes his place as head of arguably the most prestigious job in men’s college basketball. And (according to  the 2020 racial and gender report card released by The Institute for Diversity and Ethics in Sports) while Black players make up over half the D1 men’s basketball players, less than a quarter of the D1 Head Coaches were Black. As is the case in other sports, despite a majority of the participants being Black, African Americans are underrepresented in head coaching positions considering the pool is largely comprised of former players.

There will always be pressure to be the head coach at UNC; but Davis’ arrival brings an additional set of challenges that not even the great Dean Smith had to overcome. So when Davis, in his initial (largely cliché-laden) press conference announcing his selection as head coach awkwardly talked about the pride he has in his white wife, it’s hard to separate the pressure to ease the minds of a notoriously fickle fan base from his non sequitur of an answer.

To be clear, his response to a predictable question about being the first Black men’s basketball coach in the basketball program’s over 100-year history was bad. It didn’t answer what was at the heart of the inquiry; the importance of his race in that job. There are enough studies done and current news to disabuse any logical person of the notion of racial equality in America—this was Davis’ chance to talk about the symbolic importance of him holding the position, or even the material differences in representation it might yield if Davis does well.

But that’s the issue. It’s unfair to put the onus on Coach Davis to be an insightful orator on the complexities of race in America. He’s a Black man, and perhaps he has a perspective to share on the larger implications on his hire—or perhaps not. It isn’t incumbent on Black people to teach some larger lesson about the crucible of racism in America. And moreover, his success or failure should be his own. Still, Davis is uniquely positioned to serve as a teacher and mentor to his team, particularly young Black men who are in the process of determining what type of person they will be. And it’s important that he not shy away from the realities of what being Black in America looks like to his pupils—even if that isn’t done in front of cameras for the world to see.

If one were to find fault in his response, it would be that he felt the need to bring up the race of his wife. Perhaps he did it in a failed attempt to show the beauty of unity, that great things can come from different races of people coming together. Perhaps he did it in order to re-assure a portion of the Tar Heel fanbase that is uneasy with a Black man as the face and leadership of its historically great program. Whatever the reason, it was disappointing that when given the opportunity to talk about being Black in the job, it was somehow necessary to bring up the race of his spouse. His response was even more underwhelming given how openly and passionately Dawn Staley spoke about the importance of representation during her and Adia Barnes’ run to the Women’s Final Four.

It’s a disservice to glorify Charlie Scott (who in 1966 became the first Black scholarship athlete in UNC history) for paving the way for future African Americans, without acknowledging that he had no relationship with his white teammates outside of the game. History is littered with whitewashed versions of the pain and hatred that accompany breaking racist barriers. Scott bemoaned that he didn’t have a support system, an inherent pitfall of being the first to break a glass ceiling. Hopefully, Hubert has a strong one, he’ll need it to get through the usual and unique pressures of his new position. Historically, the fan base has been spoiled by decades of lavish success, and ill-tempered regarding anything but immediate positive results (they infamously hung Coach Smith in effigy not long after he took the job). Winning should cure most of the ills of a fan base that expects UNC’s dominance to extend indefinitely. Hopefully, whatever support is in place for Davis can help him navigate portion of the fan base that will see whatever success he garners while head coach in Chapel Hill as less than because of his skin tone.

Davis’ failure at the job shouldn’t prevent other Black coaches from getting high-profile head coaching jobs in the college ranks. But if the presumption is that a fruitful tenure could mean more opportunities, doesn’t the converse have to be true? In the end, for whatever racial progress is purported to be made in America, far too many are still burdened with not only exceeding at the job but needing to be pleasant and non-threatening while doing it. For many, the idea of being twice as good for half as much is as prevalent as it ever was.