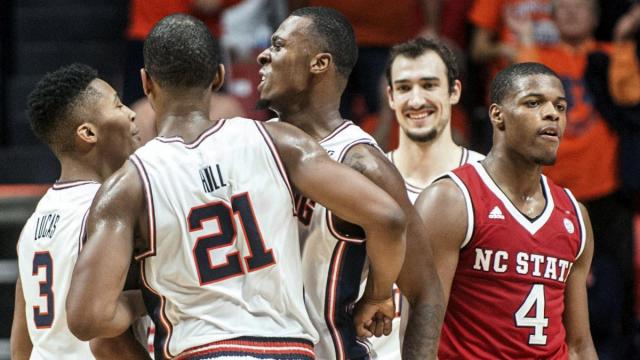 After Big Four losses this basketball season, be sure to visit SportsChannel8 as we #8splain why your team lost and what it means for the season. 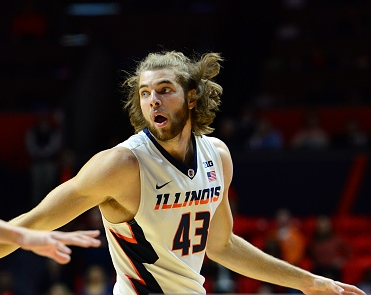 I had a feeling it might be a tough night for NC State when I got a text near the start of the game asking who “TeenWolf Dirk” playing for Illinois was. He’s Michael Finke, and he actually didn’t hurt the Pack too much, but the point remained: facing TeenWolf Dirk on the road ain’t easy.

State lost 88-74 to Illinois in a game the Wolfpack was inexplicably leading at halftime. Let’s erase that one from memory (right, NCAA selection committee many, many months from now?), but first, let’s look at how it happened.

Torin Dorn was our player of the game–not because he shot 7-for-11 from the field and led the team in scoring and rebounding, but because he was the only guy to play significant minutes and not have multiple mind-numbing turnovers (Darius Hicks played 2 minutes and had no turnovers–yaaaay–and Shaun Kirk came off the bench just long enough to catch, while still standing out of bounds, a deflected inbounds pass that he had thrown). The team finished with 19 turnovers overall–frankly it seemed like more when watching. Perhaps the more glaring issue was the lack of any semblance of a consistent offense, which led to not only bad turnovers but bad shots. It doesn’t seem like guys are just waiting for Dennis Smith to make things happen (he didn’t), or that Smith is running against the grain while his teammates try to execute a plan (they aren’t). We’re open to suggestion as to what the offensive plan is.

Despite the ugly offense, State led by 1 at the half because they mostly played hard, got some hustle points and hit a few timely three-pointers. And they let Illinois jack up 12 3’s, often by the wrong guys (like TeenWolf Dirk). In the second half, Illinois used much better shot selection, cut the 3-point attempts in half (and made half of those attempts) and shot 68% from the field. Sure, you could put some of this on the porous NC State defense but we already banged on them for turnovers, man, what do you want?

PLENTY of these: Ted Kapita showed some nice signs of being a boon to the frontcourt on both ends of the floor. We will extrapolate this to mean that a) he will flirt with third team All-ACC this year and be the subject of Jeff Goodman tweeted transfer and/or draft rumors after the season and that b) players the Pack adds mid-season will be as good, if not better than advertised.

Also, it was the first time in a rowdy road game, so now the team can talk about, you know, not jawing with opposing fans at a time when the focus should be other things. And the rest of the non-conference schedule look like good warm-up games before ACC play. And Dennis Smith didn’t play very well which obviously hurts, but we’re definitely still sure that he is really, really amazingly good and aren’t at all worried that he may not be as good as some people said because it would be a lot more fun if he were amazingly good and this is all part of him just adjusting to college games.