Brackets are released!  Well, we at least got a bracket teaser on Sunday.

For the second straight year, the NCAA Selection Committee gave us a preview as we’re about a month away from the real thing.  The preview gave us the top 4 seeds for each region as of yesterday. 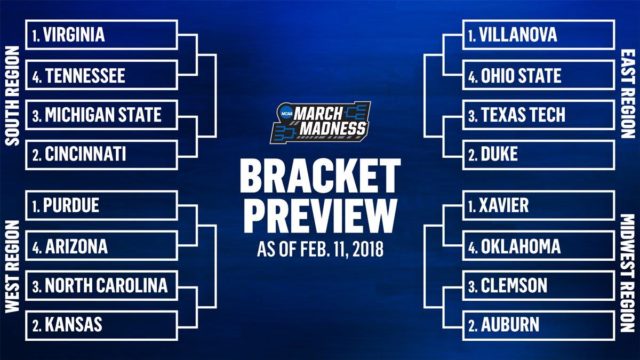 What can we learn from this bracket?

For example, a road win over Rider is valued the same as a home win over Villanova. Both are Quadrant 1 wins. That makes no sense. Based upon RPI.

While this preview is a fun look ahead, it’s far from meaningless: 15 of the 16 teams that were in last year’s Bracket Preview managed a top 4 seed on Selection Sunday.

On to today’s bracket…

ALL CAPS/conference indicates an automatic bid

(1) Xavier vs. (16) COLLEGE OF CHARLESTON/Colonial/BETHUNE-COOKMAN/MEAC

Here’s where the fun begins and where we set the Sports Channel 8 bracketology apart from everyone else.  You can simulate the bracket above using NCAAGameSim.com.  Enjoy!