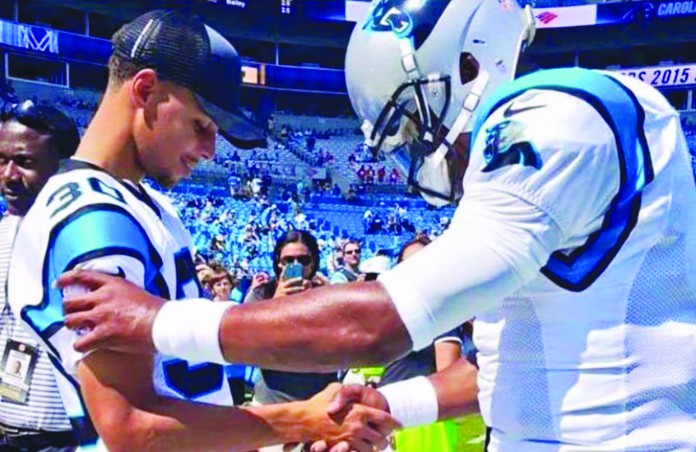 Who won? Behind a dominant defensive performance, the Panthers and Cam Newton made Steph Curry proud and ran past San Francisco, 23-3.

Why? Like we said, the defensive was awesome; Luke Kuechly and the front four controlled the game against what will likely be one of the worst offenses in the NFL.

GIF The 49ers look pretty bad, Cam’s first half was meh, but a solid victory on the road to open the season.

It’s the Panthers, so Cam Newton.

Cam didn’t have a great first half; however, he was much better in the final 30 minutes. Let’s not forget: this dude had shoulder surgery, and threw two more passes than I did in the preseason.

Most teams quarterbacked by Brian Hoyer will be bad; at best, you’re gonna be average. Regardless, Carolina’s defense looked rather good on Sunday — at all levels. Thomas Davis and Luke Kuechly combined for 14 tackles; the Panthers recorded four sacks, and hit Hoyer eight times. Compare that to Carolina’s offensive line: Cam Newton was hit just two times.

The Panther created two turnovers, which as Bryan Ives points out, is what led to both touchdowns:

The Panthers thrived off points off turnovers two years ago. Fourteen points off live ball turnovers so far today.

Also, Christian McCaffrey looked pretty darn good today. His box score stats won’t blow you away, but he was the team’s leading receiver (5 catches), and it was neat to see some of the ways the Panthers plan to use him.

However, I’d like to take a moment to question why this team continues to occasionally use Wildcat formations. If you’re quarterback is Cam Newton, what is the point of moving him out, and direct snapping the ball to a running back. You’ve lost the ability to throw the ball; the defense knows this is a run to the right or left. If you have Cam, who is one of the best runners in the league, then why do this?

Mike Shula has called these types of plays since 2011, and it’s asinine. Essentially, you’re just lighting one or two plays per game on fire.

The Panthers return to Charlotte next weekend to host the Buffalo Bills — a team composed of former Panthers. The Bills are coached by Dylan’s brother, Sean McDermott, who used to be Carolina’s defensive coordinator. And, oh, hey, Mike Tolbert is here, too! That’s a fun thing, I guess.

Buffalo defeated the New York Jets, a team worse than the 49ers, by only nine points today. It’s tough to draw too many conclusions from that; however, hopefully Carolina doesn’t look past them to a home date with division rival New Orleans on Sept. 24.

Cam Newton looks like a guy who threw two passes in the preseason.

Yo, teams are NOT gonna be able to stop Christian McFootball if he’s THIS versatile!

Man, Christian McCaffrey is all over the place. pic.twitter.com/UNqcOWd4zf

No Cam Newton press conference. Was selected for a drug test, so …