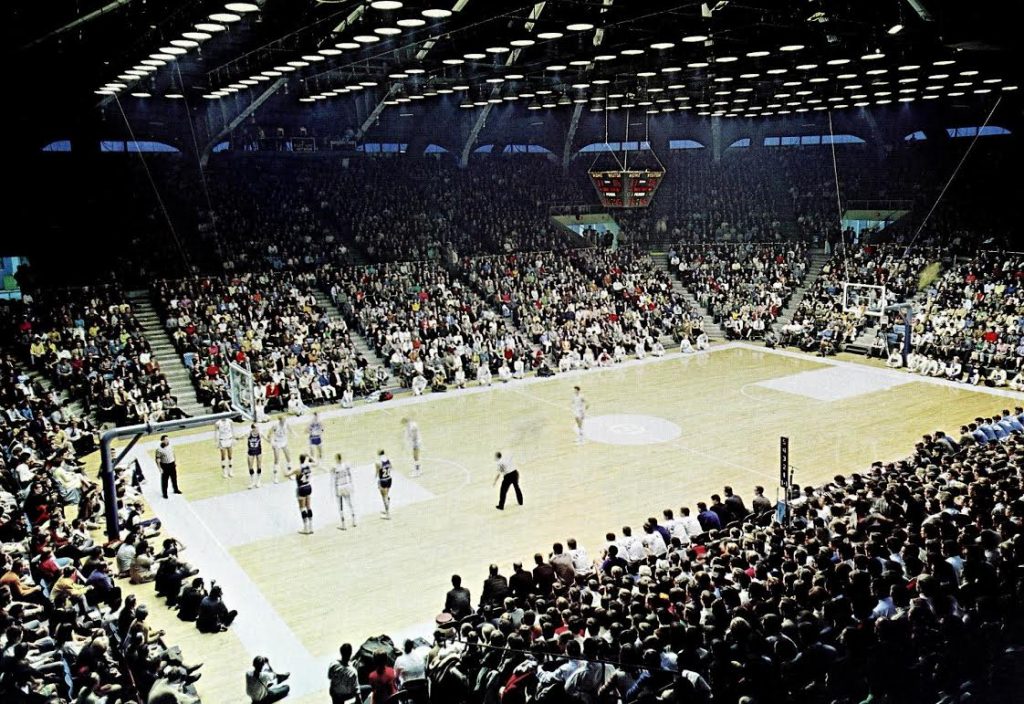 Carmichael will always be a special place

It doesn’t matter that North Carolina’s opponent today is only Wofford. I can’t wait to be in Carmichael Auditorium (no, it will never be Carmichael Arena to me) for the game.

As a kid growing up in a house on Franklin Street (near Eastgate), Carmichael was my favorite place in the whole world to be.

For some kids, Disney World might be that place. I remember going there in the mid-1970s and being unhappy that we were missing a game in Carmichael. I loved the trip except for those two hours when I knew that the Tar Heels were playing in Carmichael (it was an exhibition 82-78 victory against the Soviet Union).

I have so many great memories of going to Carolina games with my dad and watching history unfold in a classic big-time college basketball venue. For me, Christmas never could match going to a Carolina basketball game in Carmichael.

To this day, I remember the gifts of magical memories over the years.

I was sitting on the first step of the aisle behind the baseline on the south side of Carmichael next to Lillian Lee (wife of Howard Lee, then Chapel Hill’s mayor) for that historic 1974 Duke game. My family knew them because we all were members — along with Coach Dean Smith — of Binkley Baptist Church. (Coach Smith was at my baptism ceremony, but that’s another story.)

We kept saying “there’s a chance” as UNC tried to rally from an 8-point deficit with 17 seconds left. But we really didn’t believe it.

Mitch Kupchak was standing right in front of me when he threw the long inbounds pass to Walter Davis. After Davis’ shot forced overtime, I was one of many kids who ran out on the court to pat him on the back (I’m the kid wearing blue jeans and a yellow Adidas T-shirt in the grainy screenshot below from a Roy Williams TV show a few years ago). 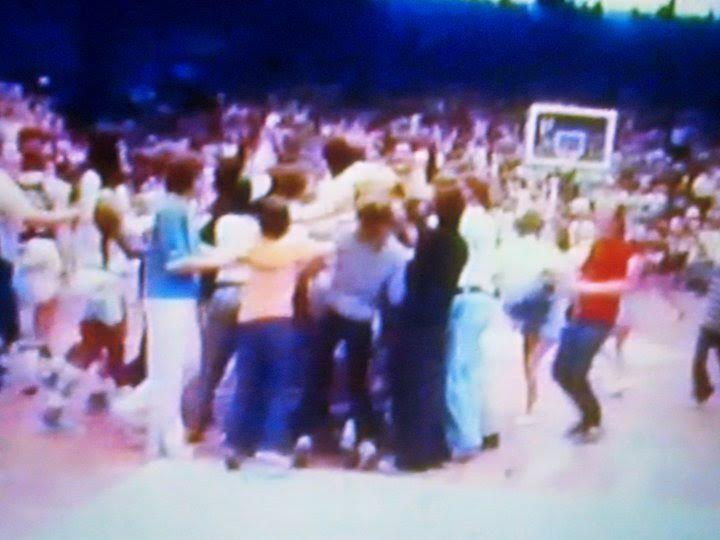 Carmichael was always a loud building. When Davis banked in that 35-foot shot, it was deafening. Television audio could never do it justice. UNC, of course, won in overtime 96-92. By the end of the overtime, I was right at the edge of the baseline (to the left of the view in the video below).

These days, the announcement of the starting lineups in the Smith Center is a time for the fans to watch and enjoy the production, with video, music and an announcer with a WWE flair. In Carmichael, fans created their own excitement. Everybody screamed so loudly that you couldn’t hear what public-address announcer Kearney Andrews was saying as the Tar Heels’ starters were announced.

My favorite times in my favorite place were when the Carmichael crowd sent the decibel levels soaring during a Tar Heels run.

There was joy when basketball practice started each season. But there was also disappointment because I would routinely ride my bike to Carmichael after school in the fall to watch players play pickup games. I would sometimes put up some shots between games. When practice started each year, that ended.

I ran out on the court after a UNC win over Maryland one year and Coach Lefty Driesell, who was sprinting to plead his case to the referees before they left the court, accidentally knocked me over.

I remember in 1978 watching the eventual 1979 national championship Michigan State team fall to UNC 70-69. Magic Johnson was the star on that Spartans team and there was a sign that said, “Magic doesn’t work in Carmichael.”

In 1979, Carolina beat Indiana 61-57 shortly after Coach Bob Knight had stirred up a bit of controversy in Puerto Rico. I was there on the far-right side of the student bleachers with friends. With Knight walking off the court at halftime and no more than a few feet away, a friend yelled, “extradite Knight!” Luckily, Knight didn’t glance up at us and just kept walking. He allegedly assaulted a San Juan policeman. What would he do to a UNC student?

Coach Roy Williams conducts postgame press conferences in a large Smith Center press room. Smith used to conduct his postgame press conferences in a Woollen Gym stairwell. There are fabulous video boards in the Smith Center. At Carmichael, in addition to a small overhanging scoreboard, there was a manual scoreboard that kids operated so that Smith could see the time and score when he reviewed game film.

I was there for both “last games” in Carmichael: What was supposed to be the last game against Clemson at the end of the 1984-85 season, on my birthday, and then the actual last game against N.C. State in January 1986.

I attended the 2010 NIT game in Carmichael with my dad and felt like a kid again, albeit with significantly less hair. No Dad time this time because I’ll be up in the traditional press row on the platform next to the Woollen Gym wall.

I wish they had never moved. I’ve been to women’s games there — including one last month. But (apart from an occasional game against Duke or N.C. State) it’s just not the same because their crowds are smaller, and the electricity isn’t there. The atmosphere on Sunday should be terrific.

As Woody Durham said on his Tar Heel Sports Network call when Davis hit that shot, it should be “unbelievable!”