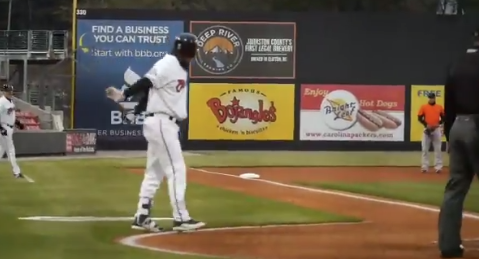 First, there was Walmart Yodeling Kid:

Me: which aisle can i find light bulbs?

There there were the various Walmart Yodeling Kid remixes:

And now, inevitably, we have Walmart Yodeling Kid (Remix) the Walk-Up Music

That’s Carolina Mudcats outfielder Clint Coulter, a 2012 Brewers draft pick out of high school. Having played his career in the minor leagues, Coulter knows a thing or two about selecting entertaining walk-up music. When he isn’t being accompanied to the batter’s box by Yodeling Kid, Coulter steps up to Sam Cooke’s “A Change Is Gonna Come” perhaps in reference to his desire of making it to the big leagues. For now, we get to enjoy his musical selections in Zebulon.

Coulter went 1-for-5 on the night, and the Mudcats beat the Winston-Salem Dash 5-0.