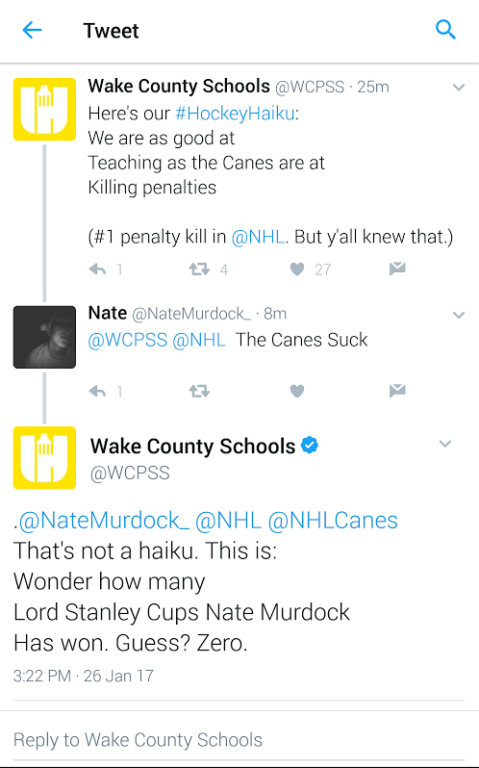 The Wake County Schools’ twitter feed (@WCPSS) has a well-deserved reputation for being one of the best (and sauciest) twitter feeds locally, and certainly one of the best for a school system nationwide. They proved themselves worthy of it again on Friday.

First we have @WCPSS using a bright spot in the Hurricanes season (their penalty kill) as a basis for a little #HockeyHaiku:

Of course, because it’s the internet, Nate reared his ugly head and had to chime in with his worthless opinion. A reminder: it’s ok to think the Canes suck (we prefer to think of them as on the upswing in the big picture and playing quite well at home this season), but have the awareness to know that this isn’t the time/place for that opinion.

Fortunately, @WCPSS can hold its own with the haters and fired back with another honest #HockeyHaiku

.@NateMurdock_ @NHL @NHLCanes That's not a haiku. This is:
Wonder how many
Lord Stanley Cups Nate Murdock
Has won. Guess? Zero.

Couldn’t have said it better ourselves, @WCPSS (although we probably would have tagged the Washington Capitals, who also have no Stanley Cups, in our haiku)