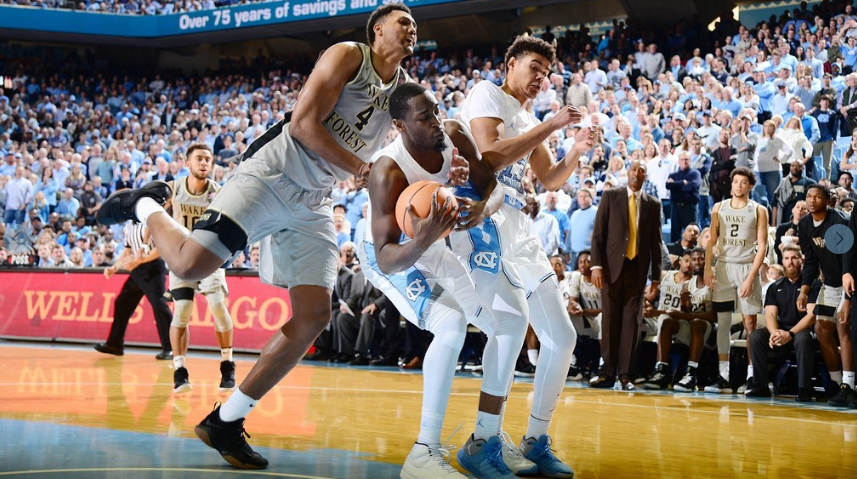 CHAPEL HILL — No. 13 North Carolina survived a number of defensive lapses, particularly from the perimeter, but turned up the heat on defense by holding Wake Forest scoreless for the final 2:21 of the Tar Heels’ 73–69 victory in the ACC opener for both teams.

You can’t say that winning the game was no small feat. In fact, going small is what made the Tar Heels winners.

Coach Roy Williams didn’t go to the “Death Lineup” —  with Luke Maye as the only big man, playing with Theo Pinson, Cameron Johnson, Kenny Williams and Joel Berry — until the last few minutes of each half.

Each time, the Tar Heels trailed and each time he got good production.

Does Coach Williams like that — or any — lineup? When he’s mad after a game, it’s hard to tell.

“I didn’t see one I liked,” he said. “I’m still looking. We went with experience more at the end.”

It sounded like Williams wasn’t necessarily picking that lineup at the end of the game, but rather looking for better defense.

“We tried to do a better job defensively and we started switching one through five to see if that would help us the last four possessions,” he said.

That name — Death Lineup — comes from the name that was attached to the Golden State Warriors lineup when former Tar Heel Harrison Barnes played there. His spot is now filled by Kevin Durant, but the Warriors current Death Lineup includes Stephen Curry, Klay Thompson, Andre Iguodala and features Draymond Green at center. Interestingly, Pinson has said that he tries to pattern his game after Green.

“As far as the concept, having the spacing on the floor, being able to drive to the lane, it’s the same concept that the Warriors have,” said Berry, who wasn’t about to compare UNC’s talent to Golden State’s lineup. “It’s something good because you don’t have your two big men just hanging out in the lane and it’s a good lineup.”

This lineup is fun.

Kenny Williams another cut and finish in the lane. pic.twitter.com/4GWOP5gfIX

Pinson said that lineup works well because of “experience and spacing on the floor, especially when everybody on the floor can drive,” said Pinson, who collected eight points, seven rebounds and six assists. “If you help off, somebody is going to make a play. Everybody is a willing passer and can shoot the ball, so it’s a luxury for everybody.”

The offense is more productive and free-flowing, and that lineup didn’t turn the ball over Saturday.

“I think it’s funny when a big tries to come up and body up against me. I enjoy it,” said Pinson, who took advantage of having 7-1 Deacs center Doral Moore guard him at one point. “When you space the floor like that with shooters like Luke, Kenny, Cam and Joel … pick your poison. And if I go to the basket, I’m either going to make the basket or kick it to one of them.”

Johnson says that while the lineup has a lot of potential, there are still a lot of kinks to work out.

“The fact that we haven’t played a ton together with that lineup and it’s not a traditional lineup that we are programmed to play or taught to play,” Johnson said, explaining the issues. “It requires more of an internal defensive and rebounding effort from the guards. Just something we obviously need to improve because Coach loves his rebounding. Just learning how to play with each other on the offensive end. It’s not the traditional two-bigs down low. We kind of spread it out a little bit more.”

Maye seems to be more productive with the lineup. He scored seven of his game-high 17 points with that small group on the floor.

Nothing too big from the young big men

Carolina obviously isn’t as good with its interior defense and offense with that small lineup. But it seems logical to use it more anyway, considering the freshman big men haven’t been that productive on either end of late.

Garrison Brooks, Sterling Manley and Brandon Huffman combined for only eight points and 11 rebounds in 35 minutes against Wake Forest, although Manley had three of UNC’s five blocks.

Getting beat at their own game at times?

UNC likes to run and prides itself on being productive in transition. That wasn’t the case Saturday when Wake Forest outscored Carolina 15-5 on fast-break points. Poor defense overall and only getting four steals led to the Tar Heels being outscored in that category for the first time this season.

It was only the second time this season an opponent has put up double-digit fast-break points (Bucknell scored 10) and the five UNC transition points tied a season-low set in the opener against Northern Iowa.

It was the second consecutive home game that UNC has been outscored in points off turnovers. It was 13-4 against Wake Forest, the largest disparity of the season.

Last season’s national champions led the nation in offensive rebounding percentage at 41.3% and they were expected to dip with the loss of Isaiah Hicks, Kennedy Meeks and Tony Bradley. Two seasons ago, UNC was third in the country at 40.3%.

The Tar Heels, who entered Saturday’s game 32nd in the country at 36%, pulled down 14 offensive rebounds that produced 16 second-chance points against Wake Forest. That masks the fact that they only rebounded 34% of their misses against the Deacs, which was actually an improvement over 29% against Ohio State and 25.8% against Wofford.

UNC has only been better than 40% for three games (Tennessee, Bucknell and Western Carolina) and will need to do that more consistently in ACC play.

A light touch before the game

For the first four minutes of the game, the logo on the two Smith Center big screens showing statistics was the Wofford logo instead of the Wake Forest logo. The mistake, which seemed like bad karma considering how the last home game went, was corrected after the first television timeout.

Judging from tweets during the game, Dan Dakich may be disliked even more as an ESPN color analyst by Tar Heels fans more than Bill Walton or Dick Vitale. 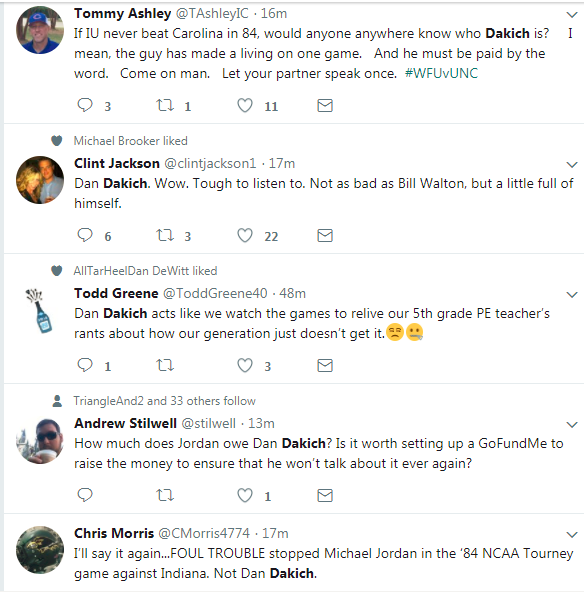