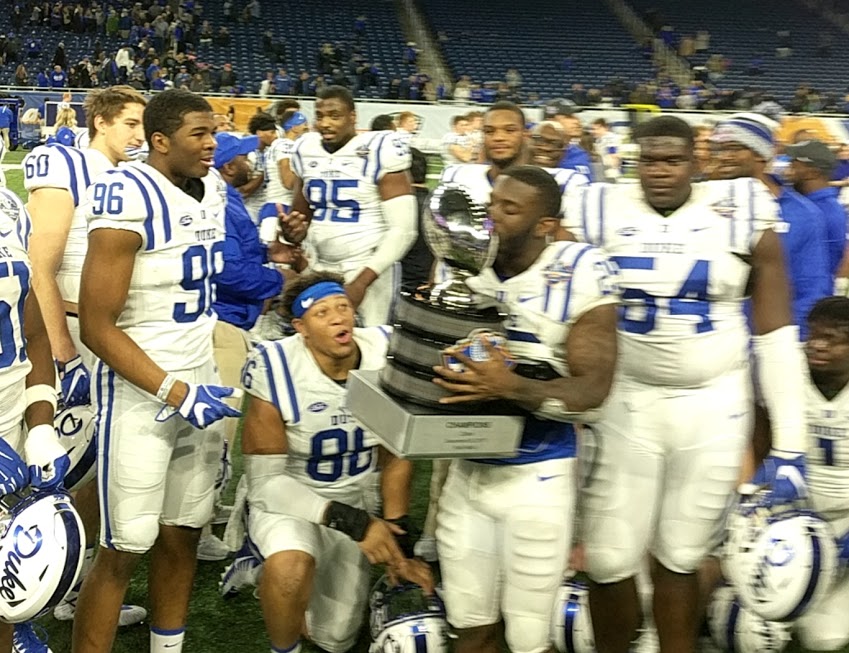 Duke beat Northern Illinois 36-14 to move their season record to 7-6. It almost makes NC schools 3-0 in bowl games this season, after App State and NC A&T took care of business in their games.

Duke had better players, a better game plan, and avoided ill-advised fake punts. The Devils’ offense was balanced, their run defense was excellent, and their pass defense was good enough.

GIF that best summarizes the game:

Here’s a look at that fake punt pic.twitter.com/vpRWZe8EvY

What will people be talking about:

Northern Illinois attempted a fake punt from their own 11 yard line on 4th and 10, while trailing 7-0 in the first quarter. It was an interesting choice.

NIU just ran a fake punt on 4th and 10 from their own 11. Then a dog was interviewed on the jumbotron. I'm not sure which one I'm more confused by. pic.twitter.com/6koXQb1DpM

What should people be talking about:

Ok, I knooooow that bowl games are meaningless and there is no such thing as momentum carrying over to the next season. That being said, you gotta think Duke’s late season rally–including, but not limited to their win in the Quick Lane Bowl–will have an impact on Duke’s next season. There’s a difference between finishing a season 4-8 and finishing one 7-6.

Also, Duke’s defense–with the exception of some defensive back coverage–played really well. A few long passes made NIU’s offensive stats look respectable, but Duke didn’t allow them a point in the first or 3rd quarters.

It’s the firs time since 1962 that Duke ended its season on a 3-game win streak.

Duke’s season is over. They’ll open the season next fall at home against Army.

Not every Duke fan at Ford Field was a winner, however.

SHE TRIED TO THROW UP THE "Bull City" HORNS OH NOOOOOOOO pic.twitter.com/uRbCzJ1PgD