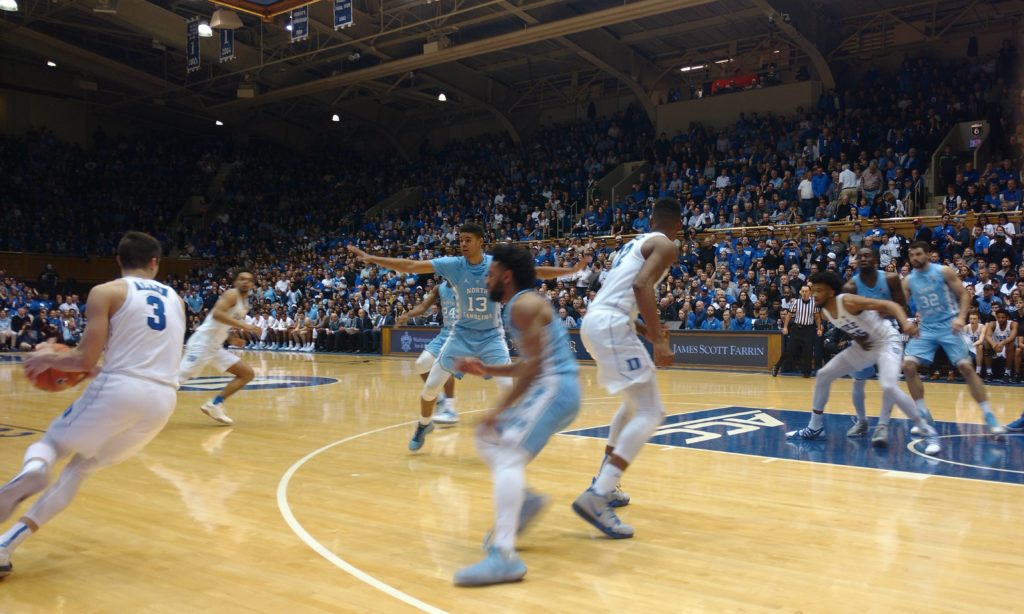 DURHAM — North Carolina blew a 13-point second-half lead when Marvin Bagley got Duke’s offense rolling and the Tar Heels’ offense stagnated in a 74-64 Blue Devils victory on Saturday night. The ball movement that got UNC such good shots disappeared and its lead soon followed.

Bagley scored 18 of his game-high 21 points in the second half, getting many easy opportunities inside, thanks partly to his 15 rebounds

Saturday’s results plunged the Tar Heels into the No. 6 seed and will force a lot of postseason late nights with Roy. UNC will need to win three late-night games in as many nights just to make the ACC Tournament championship in Brooklyn. Meanwhile, Duke can rest up as the No. 2 seed and doesn’t have to play until Thursday.

In Joel Berry’s freshman year, he scored only three points in a 92-90 overtime loss at Cameron. His last trip to Durham won’t be fondly remembered, either, as he finished 1-3 in Durham. For only the third time this season (all losses, the others were against Michigan State and N.C. State), Berry was held to single-digit points.

“You win some, you lose some and that’s basically what it is,” said Berry, who collected six points and only one of his five assists in the second half. “That’s the game of basketball. It’s not a time to panic, you’ve just got to get ready. They didn’t win the national championship today.”

“They were there, it’s just … I’m used to hitting those shots with somebody in my face and just tonight they didn’t drop for me,” said Berry, who missed all seven 3-point attempts to go without a 3 for the third time this season (the other two were against Arkansas and in the loss to the Wolfpack). “I tried to move and get to the open spots, but they just didn’t fall for me tonight and it was just one of those nights where I couldn’t do anything about it.”

The success that came against Syracuse’s zone and against Duke’s zone early disappeared after halftime.

“We got the ball where we wanted, we just missed shots,” Berry said. “Shots came off short. We didn’t shoot the ball well from the 3-point line. It was just one of those nights and there’s nothing you can do about it.”

Cameron felt like home to Johnson … for a while

Cameron Johnson’s only previous trip to Cameron Indoor Stadium didn’t go well: three points in 35 minutes of a 72-65 loss while playing for Pittsburgh. His first visit as a Tar Heel started with a lot of potential but ultimately ended with the same frustration and a very similar score.

He got comfortable with 10 first-half points when he made 2 of his 5 3-point attempts. He didn’t get as many open shots in the second half and finished with 16 points, which still led UNC’s scoring.

“It’s more frustrating when you don’t handle the things that you can control yourself, whether that be playing defense, making the right play, making the right shot, that was the most frustrating thing,” Johnson said. “You wish you could go back and change it, but you can’t. We did some things wrong that we shouldn’t have done wrong and they went on a little run and they got some points.”

He said that Duke didn’t really do anything different against him or UNC’s offense in general in the second half.

“We just didn’t execute well, didn’t move as well as we should have,” he said. “We didn’t get the shots that we necessarily wanted. We did get a lot of good shots in the second half, we just missed them.” 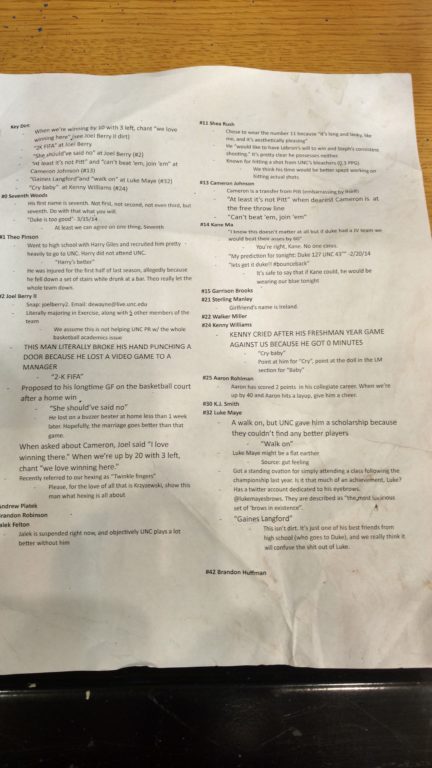 A cheer sheet is handed out to students as they enter Cameron Indoor Stadium to give them tips about what to yell at the Tar Heels. Some tips were decent, but some were inaccurate. On the front of the sheet where it lists UNC’s roster, the team is called “Tarheels.”

It says that Berry broke his hand after losing a “2-K FIFA” game to “a manager.” His frustration was with the loss of an NBA 2K game to senior teammate Theo Pinson, not a manager. The sheet also advises that the students should yell at the recently engaged Berry that, “she should have said no.”

There was intel, such as the fact that one of Luke Maye’s best friends in high school, Gaines Langford, goes to Duke. Students were advised to yell Langford’s name because it will “confuse the shit out of Luke.” It also alleges that Maye was “a walk on, but UNC gave him a scholarship because they couldn’t find any better players.”

For Pinson, students were advised to yell “Harry’s better” because former Duke star Harry Giles went to the same high school as Pinson.

If the Cameron Crazies were smart, they’d seek advice from SportsChannel8’s Ben Swain. The Duke reporter and purveyor of fine ACC humor often makes funny yet family appropriate quips regarding opposing teams from his twitter feed, mixed in with Duke football and hoops observations.

With celebrities ranging from rapper 2 Chainz to Carolina Hurricanes owner Tom Dundon, there was plenty of people-watching going on during the game.

The rapper, who unsuccessfully attempted a few half-court shots during ESPN’s GameDay broadcast, was sitting on the first row behind the Duke bench with several recruits.

From the PGA Tour, there was Hunter Mahan and Raleigh native and former Georgia Tech All-American Chesson Hadley.

Actor Ken Jeong, a Duke graduate, was sitting on the first row behind one of the baselines.

Signs of confusion: What on Earth?

Duke students took a lot of shots at UNC with their signs during GameDay on Saturday morning. But one of the most confusing and amusing ones played off Kyrie Irving’s well-documented contention that the Earth is flat. Thus, any other view is bogus to at least one Duke fan. 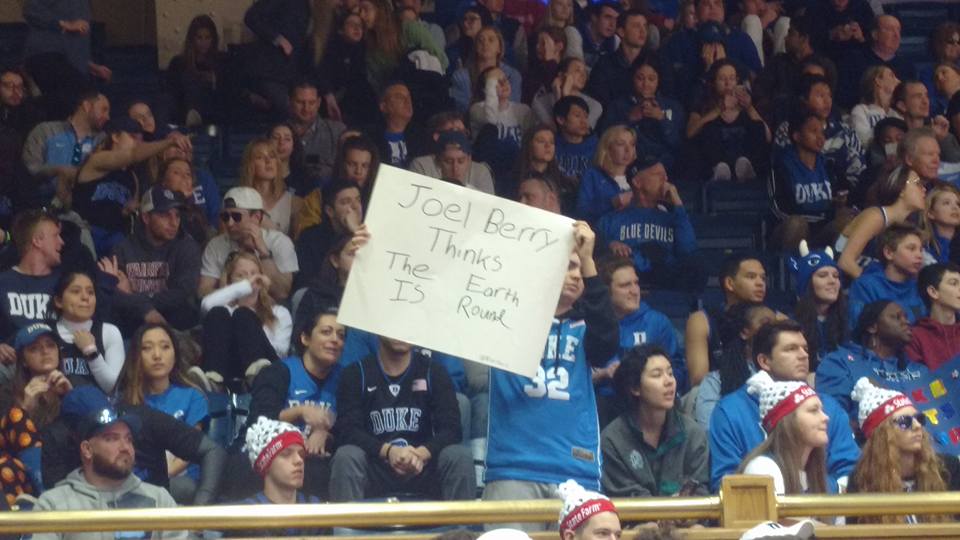 Berry was the target of other signs, including one that appeared to show his head had created a hole in the door. That, of course, played off his early-season hand injury from punching a door in frustration. Another sign guessed his reaction when watching “The Notebook.” 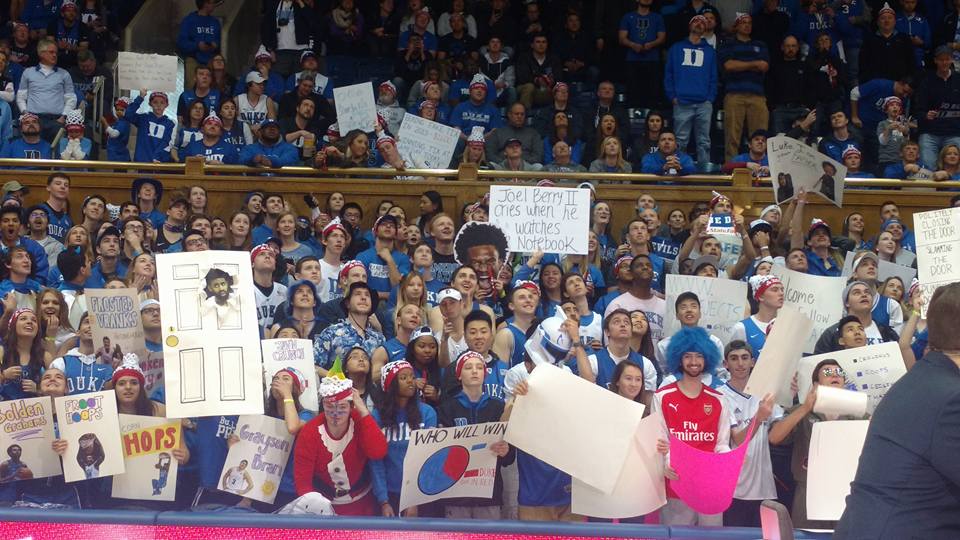 There was a “sine” below that may trig-ger amusement in mathematicians. Another sign referring to Jalek Felton’s exit from UNC plays off the confusion of Ross of “Friends” being on a “break” with Rachel. 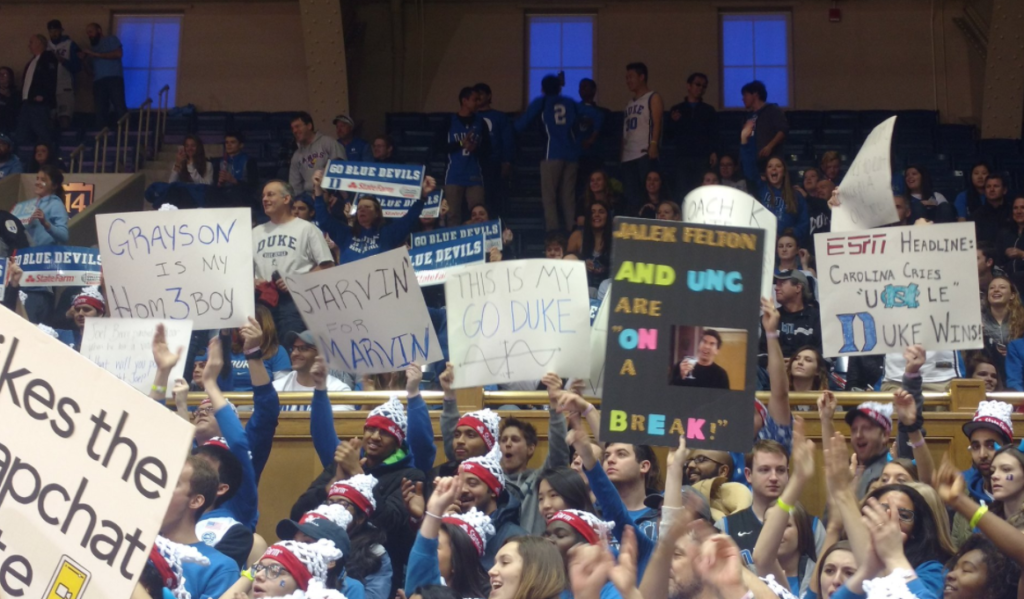 There was a group of cereal signs, with one suggesting that the Tar Heels use an odd order when preparing cereal. 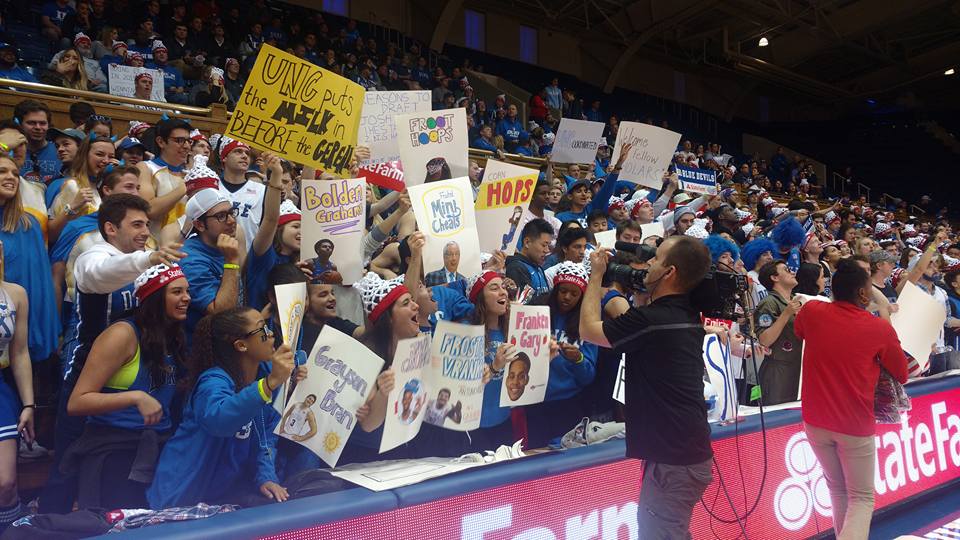 Despite that fact that Luke Maye has a girlfriend, one sign suggested that he pays for Tinder. Swipe left on that one.

A group of Bojangles’ fans weren’t happy with Brandon Robinson’s tweet and were demanding answers during warmups. They were chanting the restaurant’s name repeatedly, but Robinson went about his business and didn’t respond. 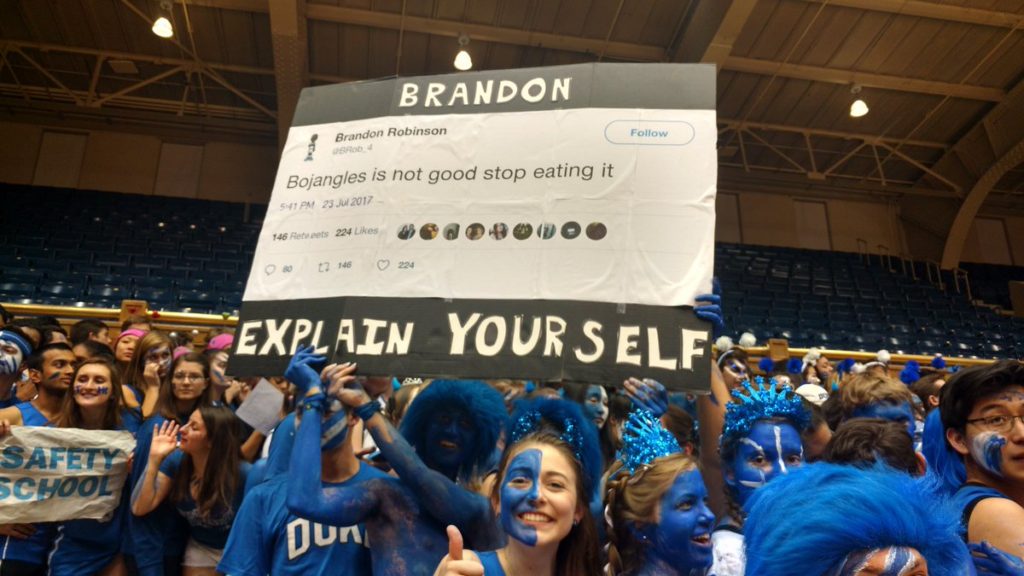 If you think that the signs are tamer than normal for Duke students, you should know that security reviews the signs as students go through the security checkpoint. Some may have been rejected. A Duke security official said signs that don’t meet the school’s standard get confiscated but wouldn’t say what percentage fall short.

Tweets of the game: Two views of Grayson Allen

Grayson Allen isn't perfect. But he took everything the world could throw at him, and he persevered. It's fitting that after four years he is leaving Cameron a winner. Great great career.

What exactly did the WORLD throw at Grayson Allen?

He caused any and all issues he had at Duke. He's been there for 4 years because he wasn't good enough to turn pro yet.

He isn't a martyr, just a SR at Duke and good college player, that is all, no hot sauce needed. https://t.co/weMd0JEzPw

With the Tar Heels’ loss, they must play in Wednesday’s second round of the ACC Tournament in Brooklyn and will have to win four games in four days to earn the ACC title. UNC will be the No. 6 seed and plays at 9:30 p.m. against the winner of Tuesday’s 7 p.m. Wake-Forest-Syracuse game.

This is only the second time Carolina has played on Wednesday since the league went to its current format in 2014. That came in 2015 in Greensboro when the No. 5-seed Tar Heels beat Boston College 81-63 on Wednesday, Louisville 70-60 on Thursday and Virginia 71-67 on Friday before losing 90-82 to Notre Dame in the Saturday championship game. UNC gets the lowest ACC Tournament seed since it lost in the first round to Georgia Tech 62-58 as the No. 10 seed in 2010.

Duke, which won the tournament despite playing on Wednesday last season, earned the No. 2 seed and will play Thursday at 7 p.m. against the winner of Wednesday’s Virginia Tech-Pittsburgh/Notre Dame game.