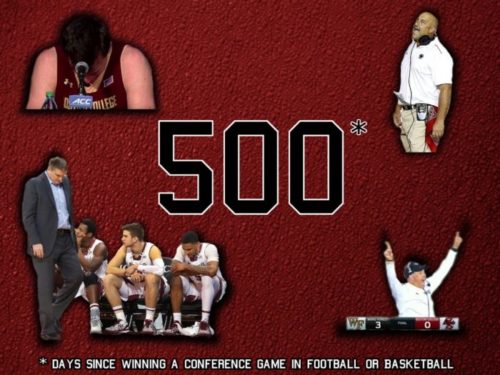 You may not know this, but Boston College is not in North Carolina. Nevertheless, as a full-fledged member of the ACC we cover them as fervently as we do the Big 4 (UNC, State, Duke, ECU), like that time we curiously decided to have a “state of BC athletics” conversation with Courtney Cox in the middle of the ACC Tournament. So we’ve been eagerly awaiting this special occasion for our Eagle brethren.

March 10, 2015 the Eagles opened up the ACC Tournament (on a Tuesday) with a nail-biting 66-65 win over Georgia Tech. It was beautiful, it was glorious, it was the last ACC basketball or football game they would win for 500 days. Five. Hundred. Days.

Not that BC hasn’t had some close ones. Hung tough in a 14-0 loss to FSU. Didn’t give up a TD in losing 9-7 to Duke. The 3-0 Homecoming loss to Wake Forest was nothing short of epic. A 17-14 loss at Louisville. 19-16 to Notre Dame in Fenway (which wouldn’t have counted as an ACC win anyway). Looking at it now, it is actually amazing they DIDN’T pull out one of these out.

Hoops was a bit more brutal, but with fewer heartbreaks. They turned victory into a 68-65 defeat against UNC, and fell one point short (73-72) of beating NC State in Raleigh. But it wasn’t meant to be.

So happy Win-iversary, BC. There are small children who have not yet experienced a Boston College ACC win. All we ask is that when you do it, make it interesting. Don’t do it with a 24-10 well-played game against Wake Forest. Give us overtime. Give us missed field goals. Give us a new Hail Mary. We love you BC, and we wouldn’t trade you for West Virginia.