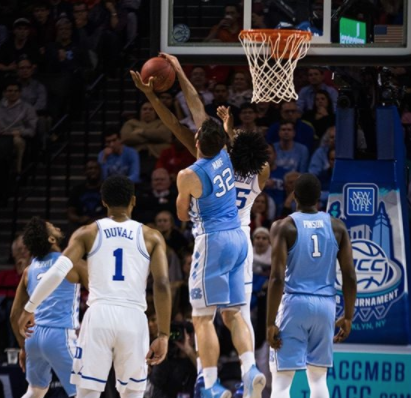 NEW YORK — The tough North Carolina defense that disappeared late in the regular season has turned up in Brooklyn. That has been bad news for the Tar Heels’ opponents.

For the second consecutive night, UNC faced a team that shredded its defense in the second halves of the two regular-season-ending losses. Just like against Miami the night before, the Tar Heels were intent on not allowing a collapse to be repeated. Again, it didn’t.

After blowing a halftime lead in Durham six days earlier, UNC never gave up the lead on its way to a 74-69 semifinal victory in the ACC Tournament at Barclays Center. It was the first tournament victory over Duke in 20 years to end a six-game losing streak.

UNC withstood a late 13-0 Duke run and a scoring drought of more than five minutes. That was thanks to Kenny Williams drawing a huge charge call on Grayson Allen with 17.8 seconds left and Allen’s miss of an awkward, leaning 3-pointer under pressure from Luke Maye with five seconds remaining.

“I thought from a big stretch in the second half, we were really, really good,” Coach Roy Williams said after the program’s 100th ACC Tournament victory. “We were making shots. We were defending. And then all of a sudden, the five-minute mark, we have five turnovers. Thank goodness when we missed a bunch of shots, we also got the rebound. Theo [Pinson] goes to the line and makes two free throws to salt it away. Kenny took a big-time charge for us.”

Joel Berry II, who rebounded offensively with 13 points and three 3-pointers, agreed that it was as if the Tar Heels have flipped a defensive switch in Brooklyn.

“I think so,” said Berry, who had three steals. “I think we can still get better on the defensive end, but that’s the one thing that’s just been killing us.

“Like I always say, we can score the ball. We have people that can score,” he said. “But it’s just about can you stop other people from scoring, and when we’re playing defense and we’re out there just running around and being active and competing, you know, it’s hard to stop us. That’s why each and every time, whenever I get a chance, I just let them know we’ve got to get stops, because that’s what it’s all about. Like I said, when we’re playing defense and we’re competing, we know we can get the ball and go down and score. So, it plays into our hands, so we’ve just got to continue that.”

Now the Tar Heels will face another huge defensive challenge against No. 1 Virginia in Saturday night’s championship.

“Defensively we really stepped up these past couple games and played a lot better, and I think that’s important for us to continue, especially against their team,” said Maye, who finally found a groove offensively with 17 points (a team-high), 10 rebounds and four assists.

UNC needed the good defense considering, at 40-39, it was only the second time this season (Notre Dame being the other) that the Tar Heels have won when being outrebounded. UNC scored 21 points off turnovers, the most since its loss at Florida State in the second game of the ACC season.

“That was really a focus for us coming into the tournament,” Williams said of the defensive intensity. “It’s March, tournament time. We knew we had to come in and be lights-out every night and it’s translating onto the court. One thing that’s consistent is the effort and the intensity has been up to where we want it to be each night.”

With Duke’s Marvin Bagley and Wendell Carter to contend with, UNC went more to Garrison Brooks. The freshman center played 16 minutes after combining for 17 in the first two ACC Tournament games. He was needed even more to defend inside after Pinson got into foul trouble. UNC even put in Brandon Huffman to put another big body out there, but he was ineffective in his two minutes.

“We didn’t want to go home, so just had to lock down on defense,” said Brooks, who scored 10 points after combining for eight in the first two Brooklyn games. His only other ACC double-digit-point game this season was 10 against Pittsburgh. “Coach put me in a situation where he told me to do what we practice and that’s what I did.”

As always, Bagley got his points. But after he scored 33 in Duke’s quarterfinal victory over Notre Dame, he was held to 19, with Gary Trent Jr.’s 20 leading the way for the Blue Devils.

Brooks got an unexpected hip check from Grayson Allen, who stuck his butt in Brooks’ direction. That resulted in a flagrant-1 foul and much angst.

“I’m not going to say it’s OK, but it’s how he plays and it was a basketball play, I guess,” Brooks said. “He was running by me and kind of stuck his hip out, but it’s over with now.”

The lessons North Carolina learned when it won three games in five days will be very valuable Saturday night when the Tar Heels play their fourth game in as many days.

“They stayed here [Thursday] night and they got in the hot and the cold tub, they do all those things to try to restore their legs,” said Roy Williams, crediting the work of strength coach Jonas Sahratian and trainer Doug Halverson. “They saw Joel last thing before he went to bed last night, saw him first thing when he got up this morning, and those guys really do try to make sure that they’re as refreshed as they possibly can be, and then other than that, it’s all in your mind, and I hope it’s not in our mind.”

It could also be about a No. 1 seed. With Xavier’s loss to Providence in the Big East Tournament, the Tar Heels could potentially earn a No. 1 seed if they are able to knock off the top-ranked Cavaliers.

The NCAA committee says it will put a lot of stock in quadrant one victories. UNC now has an NCAA-high 13 such wins, ahead of 11 for Kansas and Virginia.

And, of course, a win means another league title as the Tar Heels make their conference-record 60th championship-game appearance. It’s the 22nd consecutive season that either UNC or Duke have made the championship.