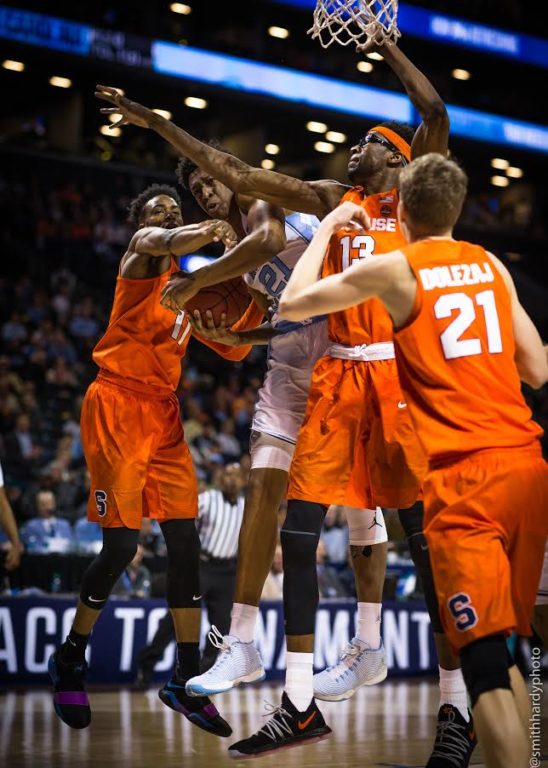 That was a common phrase the legendary former voice of the Tar Heels Woody Durham used when North Carolina was in a tough spot during a game. He was imploring fans to follow whatever superstition they have used in the past to pull the Tar Heels through.

Coming off two consecutive tough losses, the Tar Heels didn’t lean on superstition, but effective actions. With “Woody” in black on the backs of UNC’s warm-up shirts, Carolina came up with a performance that would have made Durham proud on the day he passed away.

They went where they hadn’t gone the last two games and found a solid mindset on defense. And they did what they do when that happens: create turnovers.

That propelled UNC to a 78-59 victory over Syracuse on Wednesday night in the ACC Tournament at the Barclays Center to earn a quarterfinals matchup Thursday night with Miami. The Tar Heels allowed opponent season-lows in points, field goals (20) and shooting (31.7%).

Durham, who was diagnosed a few years ago with the degenerative brain disorder primary progressive aphasia, died at 12:45 a.m. Thursday. Before the game, Coach Roy Williams embraced Durham’s son, Wes, who was on the TV call for the ACC Network.

“It was a sad day for all of us because I lost a friend, but we lost a guy who’s a legend in North Carolina basketball,” Williams said. “But you’ve got to understand, nobody on my team ever worked with Woody. It’s something like that. I loved him to death, love his family, went over to tell Wes something before the game, but it had nothing to do with the game. Woody himself would have been extremely disappointed if I said something different.”

There also was a moment of silence before the game for Woody Durham. Sadly, some (possibly inebriated) Syracuse fans chose not to honor the moment and the UNC players were very much aware.

Joel Berry on the folks who decided to chant and yell during the moment of silence for Woody Durham: pic.twitter.com/wU4es4YdzE

Once the game started, the defense quickly got going. After forcing only 10 turnovers in the entire first victory over Syracuse, they forced nine of 12 turnovers in the first half, including two shot-clock violations (there were at least two more in the second half) and two steals off traps.

Joel Berry II, who had a quiet night offensively with eight points and four assists, said he thought it was UNC’s best defensive effort of the season.

“I think so,” Berry said. “We did a good job of staying in front of the ball, that was the biggest thing. They live off of trying to go one-on-one and getting somebody to help on the man and then kick it out for a 3-point shot. In the first half we did a bad job of covering the 3 but in the second half we did better.”

After the Orange made 7 of 13 shots from 3 in the first half, it made only one of 10 second-half attempts.

UNC did a much better job of containing dribble penetration than in the two losses and defended ball screens more effectively.

“It was a good defensive effort from a lot of guys,” said Cameron Johnson, who had 13 points and five rebounds. “I think we put a lot of things that we have been working on together there and it was real fun to be part of. We locked in a lot on the defensive end, that was the big focus coming in. They have some guys who do the majority of their scoring and we really had a goal of shutting those guys down and making their shots uncomfortable.”

The best of the defensive efforts came from Kenny Williams, who guarded Tyus Battle much of the game. After Battle scored 26 on UNC in the first meeting, he was held to 15 on Wednesday.

“He just made it tough on him,” Berry said. “Every shot he took was contested. Kenny stayed in front of him for the majority of the time. There were a couple of times where he just had to force up a shot at the end of the clock and they were air balls. So, hats off to Kenny for staying in front and making it tough for him.”

Williams, who had three steals, also turned it up a few notches on offense, leading Carolina with 17 points. UNC is now 19-3 when Williams scores in double-digits.

“We knew we had to lock down on them,” Williams said. “We knew Battle, [Oshae] Brissett and [Frank] Howard took the majority of their shots, so we knew — and we knew that they played a good game against us up at Syracuse. We just had to lock in. And yeah, he got a couple early, and I had to step it up a little bit after that.”

Brissett led all scorers with 20 points.

Carolina survived going six second-half minutes without a field goal. And when Syracuse brought on the press, the Tar Heels handled it much better than they did at Duke.

UNC got good play from its bench as well, which is crucial considering that it may play four games in as many days.

Seventh Woods, who has struggled of late, played good defense as the Tar Heels outscored Syracuse 6-2 when he gave Joel Berry II a first-half rest. Sterling Manley and Garrison Brooks also put in some good minutes.

Pinson, who had another double-double with 16 points and 10 rebounds and added five assists, drew fouls by taking it to the basket more rather than passing it off like in the first game. UNC had 28 free-throw attempts after getting only one in the second half against Duke. Pinson said the key offensively was to be in attack mode.

“They contest every shot that goes to the rim, so every point we could get in the middle I wanted to put pressure on them to make a good play and keep attacking, and we got the call, so it was good on our part.” 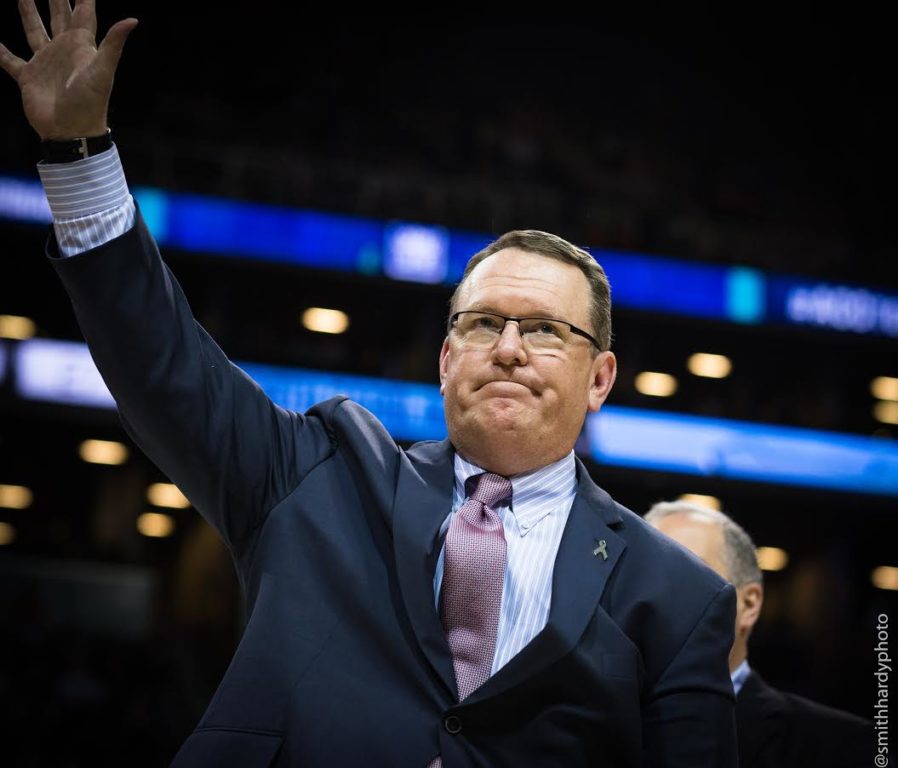 Wes Durham worked ACC Tournament games Wednesday as originally scheduled on the day his father Woody — the legendary former voice of the Tar Heels — died. It was fitting that UNC’s contest against Syracuse was one of them.

Woody Durham recently told Wes that, no matter what, he should go ahead and broadcast the ACC Tournament games.

“Our family is grateful for the incredible support my dad and our family received throughout his illness,” Wes Durham said in a statement. “From the medical teams to the general public, it’s been amazing. We hold to and will always cherish the wonderful memories he left for our family and Carolina fans throughout the world.” 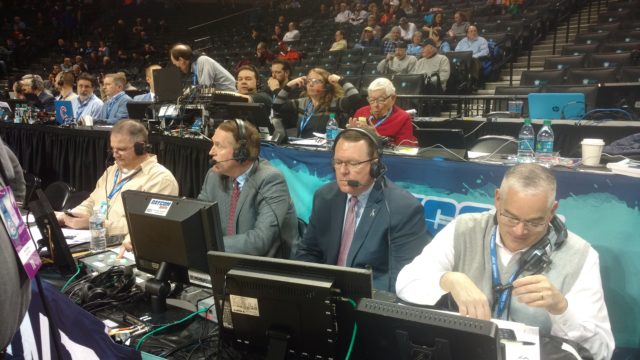 Wes, who delivers a call with a cadence like his dad and sounds a lot like him, also called the early-evening Notre Dame-Virginia Tech game. He was in good spirits before the evening doubleheader as he was greeted by many, including this writer. I told him how much his dad meant to me as a kid growing up and listening to games.

During one first-half timeout, Wes Durham accepted the Bob Bradley Spirit and Courage Award on behalf of his father.

Wes Durham called the action from the first row of courtside tables. Near him on the second row, and also going through a difficult broadcast Wednesday, was Jones Angell, who worked alongside Woody Durham before taking over as the voice of the Tar Heels in 2011.

“I am filled with sadness at the loss of a mentor, friend and Carolina icon,” Angell said. “Woody meant so much to me personally and professionally, and I feel honored to have worked with him and learned from him. We try to reach the standard of excellence Woody set for 40 years through his passion and professionalism on every broadcast on the Tar Heel Sports Network. We will continue that moving forward.”

Durham was the only topic for nearly the first 20 minutes of Wednesday’s Tar Heel Sports Network broadcast.

In an emotional opening, Angell talked about his favorite Woody moments and what Durham meant to him and all Tar Heels fans. Some of Durham’s career highlight calls were played. A few of Durham’s comments at his retirement press conference about his career and UNC fans were played to end the memorable opening segment.

In the second segment, color analyst Eric Montross (who worked with Durham for six seasons), Angell and goheels.com columnist Adam Lucas did more reminiscing about Durham.  At halftime, the radio voice of the Carolina Panthers Mick Mixon, Durham’s color analyst for 16 years, talked about what Durham meant to him.

No spitting in the river for the ACC Tournament

I decided to run from my Airbnb near the Barclays Center on Wednesday morning across the Brooklyn Bridge to Manhattan and back.

As I was getting close to the Manhattan side on the cold, blustery day with a mix of rain and light snow, I could see three men bundled up and walking toward Brooklyn. I noticed that one of them was wearing a UNC jacket. It wasn’t until I was a few feet away that I realized that it was Coach Roy Williams.

So, even with a late-night start to his game, he was up early to get in his walk.

His superstitious custom when the Tar Heels play in the NCAA tournament in cities along the Mississippi River, such as St. Louis, Memphis and New Orleans, is to spit in the river for good luck.

After turning around in Manhattan and heading back, I had a brief exchange with Williams as I passed him. I asked if he was going to spit into the East River. He said no. Apparently, his superstition about spitting in the river does not apply at the ACC Tournament.

Even though it is next to impossible to play one game at 7 p.m. and expect a second game on the same court to start at 9 p.m., the ACC continues to list the second evening games as starting at 9 p.m. Similarly, it lists games following the noon contests as 2 p.m. starts.

Most media outlets (except for ESPN) refuse to go along with this and list those second games as 2:30 and 9:30 starts. That, too, is an estimate, but one that is always much closer than the lunacy of saying that the game will start at 2 p.m. or 9 p.m.

The second Wednesday afternoon game, Boston College’s win over N.C. State, started at 2:35 (the first game ended at 2:05 p.m.) and the UNC-Syracuse game started at 9:47. At 9 o’clock, there were still more than two minutes left in the Notre Dame’s win over Virginia Tech, which ended at 9:15.

The NCAA does many things wrong. But at least during its tournament, it lists the second game of doubleheaders as starting 30 or 40 minutes after the completion of the first game. It’s accurate and no time estimate is given.

The ACC, of course, lists Thursday’s UNC quarterfinal against Miami as a 9 o’clock start. If it actually starts at 9 o’clock, SportsChannel8 will give up alcohol. (read: it ain’t happening)

Nine days after Ja’Quan Newton’s buzzer-beating heave near half-court ruined Carolina’s senior day, the Tar Heels get a chance to avenge the defeat against a well-rested Miami team. The Hurricanes haven’t played since defeating Virginia Tech 69–68 on March 3 for their fourth consecutive victory. The sting of UNC’s 91–88 loss to Miami, and the way that the Hurricanes seemingly drove to the basket with little resistance, will no doubt weigh heavily on the minds of the Tar Heels for the 9:30 game Thursday night.

“The biggest thing is we want to stop the ball from going to the middle. It’s hard to try to cover,” Berry said. “We need to guard the ball like we did tonight tomorrow. And if we do that, that will go well for us.”