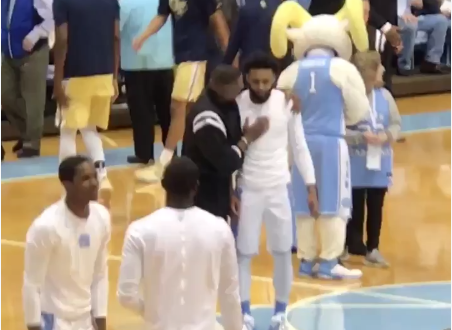 CHAPEL HILL — North Carolina shook off first-half offensive struggles to take control early in the second half, then held on to beat Georgia Tech 80–66 Saturday for the No. 15 Tar Heels’ fourth consecutive victory. But it was far from a thing of beauty.

TV Teddy was back and apologetic

So much for the theory that referee Ted Valentine would be taken off Carolina games the rest of the season. After turning his back on Joel Berry II and facing the Florida State dance team rather than listen to Berry’s complaints after a foul wasn’t called, some speculated that might be the case.

Valentine told The Fieldhouse (The Athletic’s college basketball site) that he was considering retirement because of the fallout from the Berry incident. He didn’t do a game the entire following weekend, but he’s maintained a hectic schedule since then and appears ready to fulfill all his commitments for this season.

Berry and Valentine shook hands and had a short conversation before the game.

Does this mean we can all be friends again? pic.twitter.com/K2sWv4ySpI

“He was just telling me that he apologized for what he did. I’ve always had respect on the court for him as a ref,” Berry said, who finished with three fouls and 16 points. “That’s all he said, just apologized and made sure that there was nothing wrong between us and I told him it was all good, it was in the heat of the moment.

“And, at the end of the day, you’re still a human and sometimes we get a little emotional and do things that we look back on and kind of regret, so I had no hard feelings for him from the start. It just happens, that’s part of life. I really appreciated that,” Berry said.

While this was going on, Pinson saw comedic value in the exchange as he watched.

“I was back there,” Pinson said. “I was trying to do the Russell and KD …  I was clapping behind them, like ‘hey, yay. They did it. That’s good now!’ It was hilarious. It was funny to me. Just I’m glad it’s out of the way now.”

The game in Chapel Hill on Saturday marked the 12th consecutive day Valentine has worked a game. In that span, he’s worked in seven states, including three games in North Carolina. On Friday night, he did the St. Bonaventure at Davidson game.

Pinson said he had a short conversation with Valentine.

“I went to talk to him about one play, but I didn’t talk so much as I did the last game,” Pinson said.

With one Berry controversy over, it was on to another one: When the Jackets Jose Alvarado fouled him hard, then stepped over him, earning a technical foul.

“I just felt like it was disrespectful to me,” Berry said. “I just never want anybody to disrespect me like that. I knew at the time he was going to do it. I tried to get up fast. I just don’t like people stepping over me and I told him, ‘watch where you’re stepping.’ ”

For the rest of the game after that incident, UNC fans booed loudly each time Alvarado touched the ball.

Zoned out at times on offense?

Georgia Tech’s mixture of zones, junk and man-to-man defenses made it a challenge for Carolina to run its offense, particularly when the perimeter shots weren’t falling. That led to the Tar Heels going scoreless for 6.5 minutes in the first half and more than three minutes in the second half.

“Their defense is a little different than what we’re used to seeing,” Berry said. “They start out in the zone and then it’s kind of like a match-up man-to-man, so it threw us off a little bit. But I think the good thing is that we started getting a little bit of turnovers from them and we were able to get out on the break and started getting some easy points rather than having to go up against their set defense every time. That kind of helped. It’s a little different.”

The Jackets pushed UNC’s offense out and made inside points and entry passes difficult. The Tar Heels panicked at times and attempted the great pass but, instead, turned it over. Long, cross-court passes and kick-outs finally began to work for the Tar Heels in the second half.

“Going into the game, you know that’s what they do,” said Pinson, who put up his second career double-double with 11 points and 10 rebounds in addition to four assists and three steals. “That’s what they harp on. They try to change the looks for you to switch up your pace and the way you play.”

After committing 10 first-half turnovers, the Tar Heels only had four in the second half. Berry said it was a matter of being smarter.

Sporting a new hairstyle with short braids and, seemingly, a newfound resolve inside, Sterling Manley has pushed himself higher in the rotation. For the second consecutive game, he was the first big man off the bench ahead of Garrison Brooks, who started every game before UNC went to the small lineup in the last four games.

“He’s getting it right now,” Pinson said of Manley. “You can tell. He’s just out there playing basketball and when he plays with that level, we’re really dangerous.”

Manley is being physical inside offensively, strong with the ball and keeps the ball high while staying assertive.

Manley battles Lammers for the offensive board, and gets the put back. pic.twitter.com/ApyGSDiMcN

Manley tied his ACC-high with nine points and pulled down three rebounds.

It was only the second time this season Manley played more than Brooks (12 minutes to 8; it also happened against Bucknell.) It is two consecutive season-low minutes totals for Brooks, who played 11 against Clemson.

“Just trying to flash into the high post, cut baseline because you can see as a result,” said Manley, who has obviously turned up his level of play on defense as well, and is willing to do whatever is asked of him.

“They’re just saying, for all of us, to just stay active and rebound,” Manley said. “We have enough scorers on the team, so we’re just doing what needs to be done — set screens, get Cam open, set screens, get Joel open. If we set screens and get them open, it’s going to open up for us.”

He had no explanation for the change in playing time but admitted that it has given him more confidence.

“I’m excited, just doing what needs to be done,” Manley said. “Just going out and being active and affecting the game and it just makes you play better and play harder.”

What about the hair?

“I was just trying to be different, do a little something different,” Manley said. “I remember Isaiah [Hicks] did this last year, so I was like, ‘let me try to do it a little differently.’ But I was like, ‘we aren’t going to lose this time.’ ” 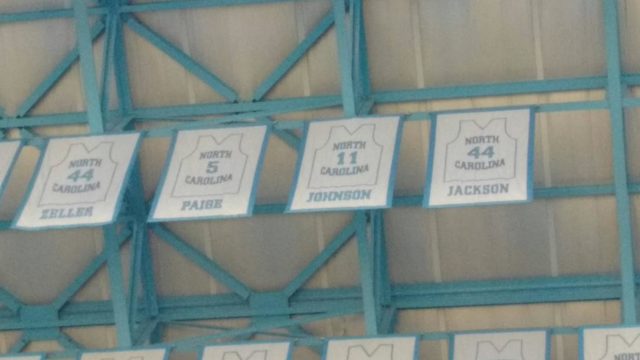 Justin Jackson, whose Sacramento Kings play at Charlotte on Monday, was at the Smith Center on Saturday to be officially recognized for having his No. 44 jersey honored. His jersey has been hanging from the rafters since the season began.

When Berry earned Most Outstanding Player honors at last season’s Final Four, he met the criteria to have his No. 2 jersey honored. His number is not yet hanging from the rafters, though. There is a No. 2, but that’s for Raymond Felton

This is similar to the situation for Marcus Paige, who met the honored-jersey criteria when he was named second-team All-America after his sophomore year. His jersey didn’t go up until after he graduated.

There’s also another consideration: He could move this season from having an honored jersey to a retired jersey should he earn one of six specific national-player-of-the-year awards. The placement and color of the banner would change.

That doesn’t appear likely at this point, short of an incredible run to finish the regular season.

Putting a different spin on being “locked in”

While I cannot confirm, I did overhear in the depths of the Dean Dome, that GT coach Josh Pastner got locked in the away locker room at halftime. He was knocking to get out.

A UNC official said that a Georgia Tech coach did get locked in. It wasn’t Jackets coach Josh Pastner, but one of his assistant coaches.

At least once every month this season, Carolina plays twice in a stretch of three days (with a more rigorous stretch in November).

The Tar Heels are in this month’s three-day stretch, and will play at Virginia Tech in the first game of ESPN’s Big Monday doubleheader with the two tipoff times separated by 53 hours.

Next month’s instance will be more intense: UNC plays at home against Duke on Thursday, Feb. 8 at 8 p.m., then visits N.C. State on Saturday, Feb. 10 at 2 p.m., with only 42 hours between tipoffs. Assuming UNC wins at least once in tournament play, it will happen again in March.

The Jackets were playing their second game in three days after losing at home to Virginia 64–48 on Thursday night.

“We were tired here and there,” Pastner said. “But nobody is going to feel sorry for us and it is what it is. You have to deal with it. That’s just part of the grind of the ACC.”

The Hokies have lost two consecutive games after a 94-86 loss on Jan. 13 at Louisville and a 91–82 loss at home against Florida State on Saturday.