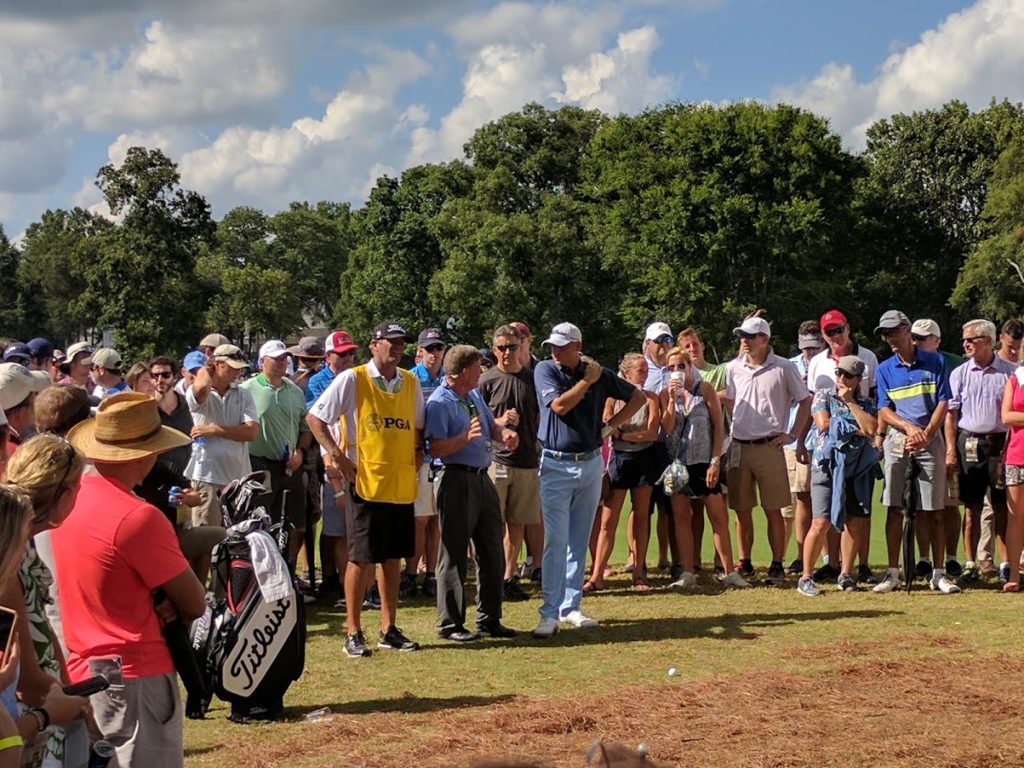 Anyone who has played golf as much and as poorly as I have knows the hacker’s credo: it only takes one shot to bring you back.

No matter how badly you may have torn up a golf course, no matter how many clubs you have threatened to snap or how resolute you have become that this will be your final time playing, one pure, beautiful, clean-sounding, good-looking (and probably somewhat lucky) shot can change your whole attitude. You convince yourself “this is the golf I can play!” and the triple and quadruple bogeys fade a bit from memory.

Saturday at the 99th PGA Championship, I learned that the “it just takes one shot” theory applies to golf FANS, too.

Being a spectator at a golf event can be a bit frustrating, especially if you only care about golf. It’s basically a cross between a large outdoor cocktail party and a tailgate, depending on how much money you spend on tickets. If you’re happy hanging out in the tent you paid for, you stay there and drink and get to see a few golfers you know putt.

Chasing the action on the course is tougher. You can follow one group, or you can sit in a couple different viewing spots and watch multiple groups come through. One thing is for sure though: you will almost ALWAYS feel like you are missing something. You’ll hear cheers when long putts are made, even bigger cheers when balls hit from the fairway threaten the cup or even disappear on the green, or maybe some “oh…ohhh…OHHHH……awwwwwww” sounds if someone lips out an eagle putt.

But it always feels like it’s happening on some other hole.

Saturday I was ineffectively moving about the course watching different things. I wanted to see Raleigh’s Grayson Murray play for a bit (he played great and is tied for 6th headed into Sunday). I wanted to see the guys in contention to win (watched Kevin Kisner on the practice tees–we’ll count it). And I wanted to see some of the Green Mile–the final 3 holes of Quail Hollow.

That’s how I found myself on the walking up the side of the fairway at the 500+ yard par-4 16th hole when I noticed the gallery shifting in a way that could only mean a ball had gone astray. 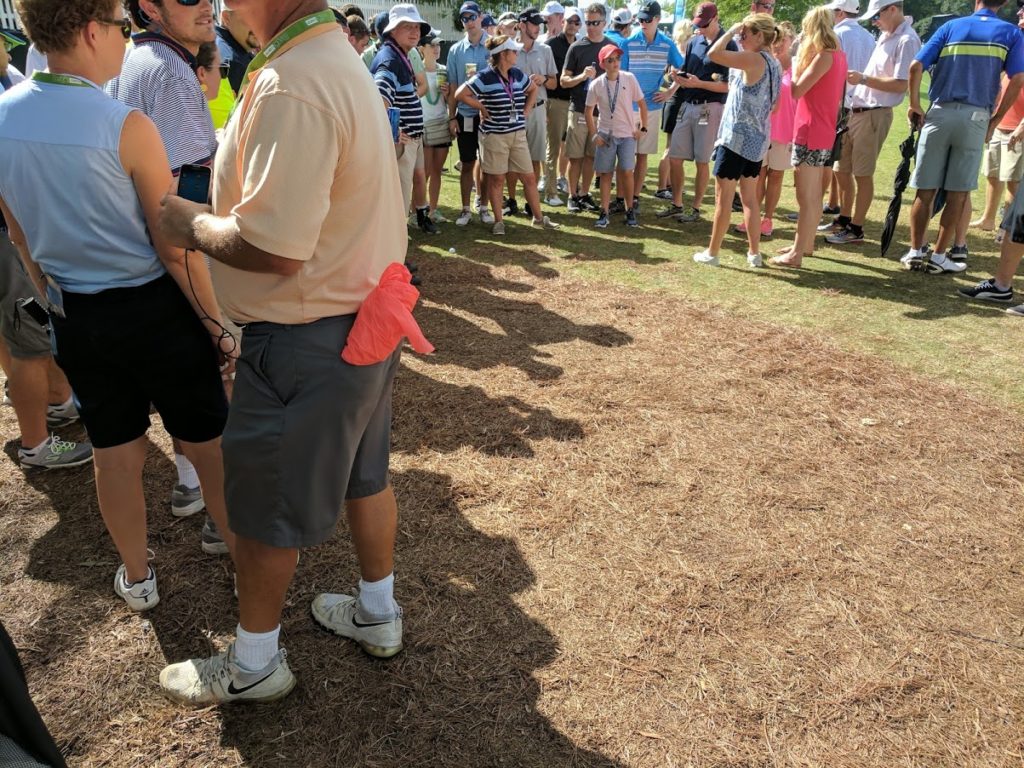 The ball rested on some pine straw just in the rough on the right side of the fairway. Directly in front of it was a large tree blocking the line to the green. To the right of the tree was a stretch of concession and viewing tents.

A ball in the gallery is exciting for a number of reasons–the golfer will now be standing even closer to the fans (proximity to players is great in EVERY sport, it is underrated in golf) and usually it means the golfer will have to get creative. The buzz had just started as I walked up: “Who is it? Whose ball is it?” “What’s he going to do?” “Can he turn it around this tree? No way!”

We also tried to line up where we guessed the shot would go. Figuring the mystery golfer was playing it back towards the fairway (but skeptical he could pull it off), folks began using the tree as the new standing line. 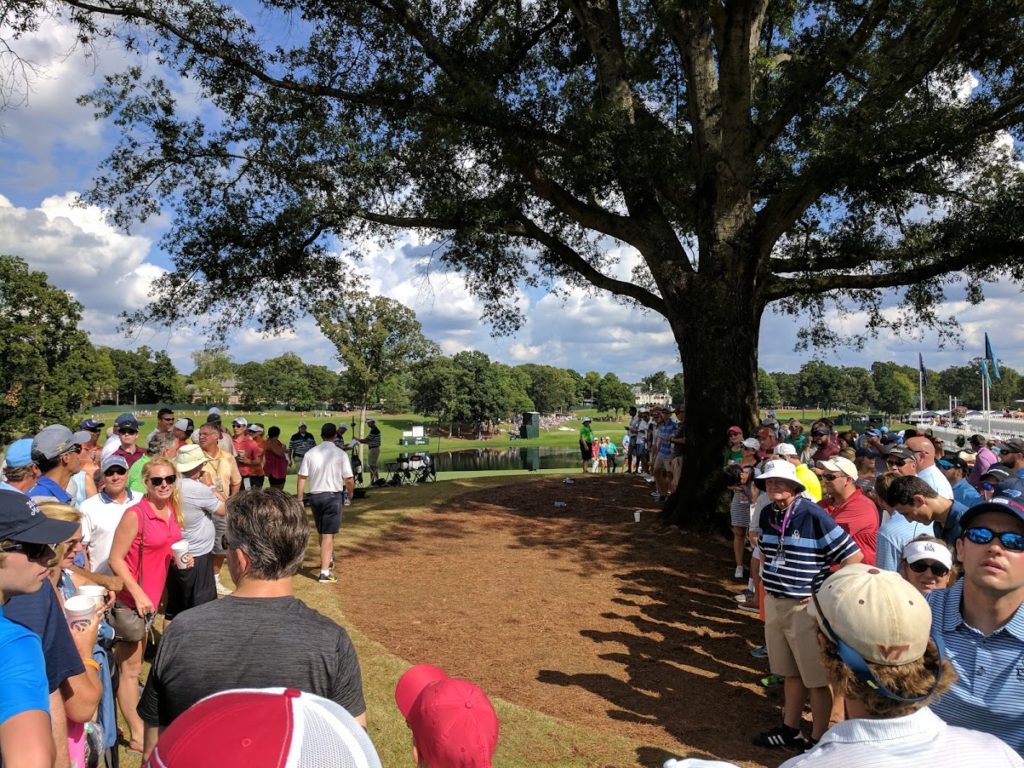 About this time, former Fed Ex Cup winner and Wake Forest alum Bill Haas strolled up. He was +2 on the day, having made 3 bogeys plus a birdie on #15. He was struggling to be straight off the tee, so this was another in a line of creative shots he’d have to hit today. Golf fans like Haas–he’s a nice guy, played college golf at one NC school and it probably didn’t hurt that his light blue pants he wore Saturday matched the colors of another. Now the gallery was even more excited, regardless of where he stood in the tournament.

The first thing Haas and his caddy did upon reaching the ball was dispel the popular rumor that they would be going to the left of the tree. 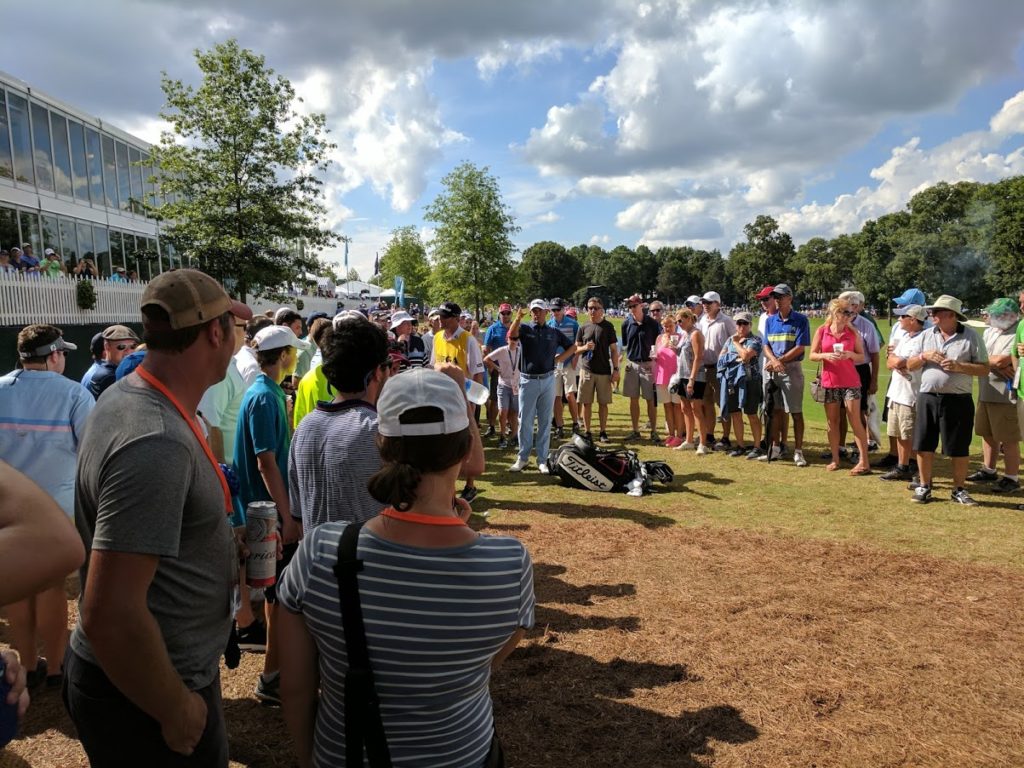 Haas looked at his options and immediately decided the play was to go RIGHT of the tree, towards the tents/concessions. Fans on that side were told to rearrange. In the shuffle, I noticed Haas’ caddy actually requested fans be backed up against the green fence, further beyond the cart path, but the officials on site didn’t catch that and only moved people back to the cart path. It was not lost on me that this was about 10 feet closer to where the shot would go, and would make it appear that Haas was aiming right at them.

The crowd, while moving, reacted some more. “He’s going right?!” “Won’t he hit the tent?” “Could he hit one of those flags?” The anticipation built. Now we were carrying on conversations with our neighbors, our new found friends for the course of this one shot. “Phil was near this spot last year and hit the green.” “I think he’s gonna hit those flags.” “Is your name Hayes? I think we met you at Jon Purinai’s wedding!”

Next up, Haas consulted a rules official about getting relief from the tent. If a concession tent or grandstand or something that isn’t normally part of the course is in the way of a shot, a golfer can be granted relief–moving his ball so the obstruction is no longer there.

As Haas expected, the rules official explained that the tent was only in Haas’ path because he was being forced to play the shot around the tree. No relief for that, but it was worth the effort. Now it was just a matter of taking a 200-yard+ iron low enough to get under the branches, high enough to get over the tent, and right-to-left enough to get around the tree and working towards the green. Oh, and mind those flags on the tents, too. 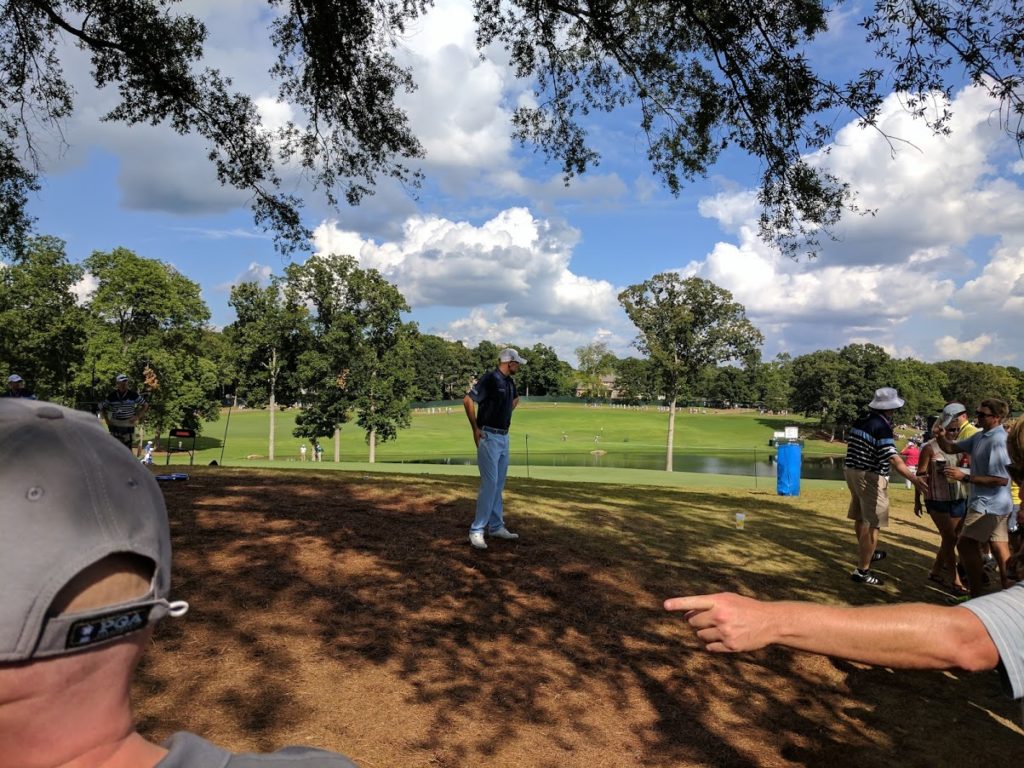 The gallery was completely captivated. Side bets were being made regarding what would happen. People who had been hanging out by #16 all day but had forgotten there was a golf tournament going on were now fully attentive. 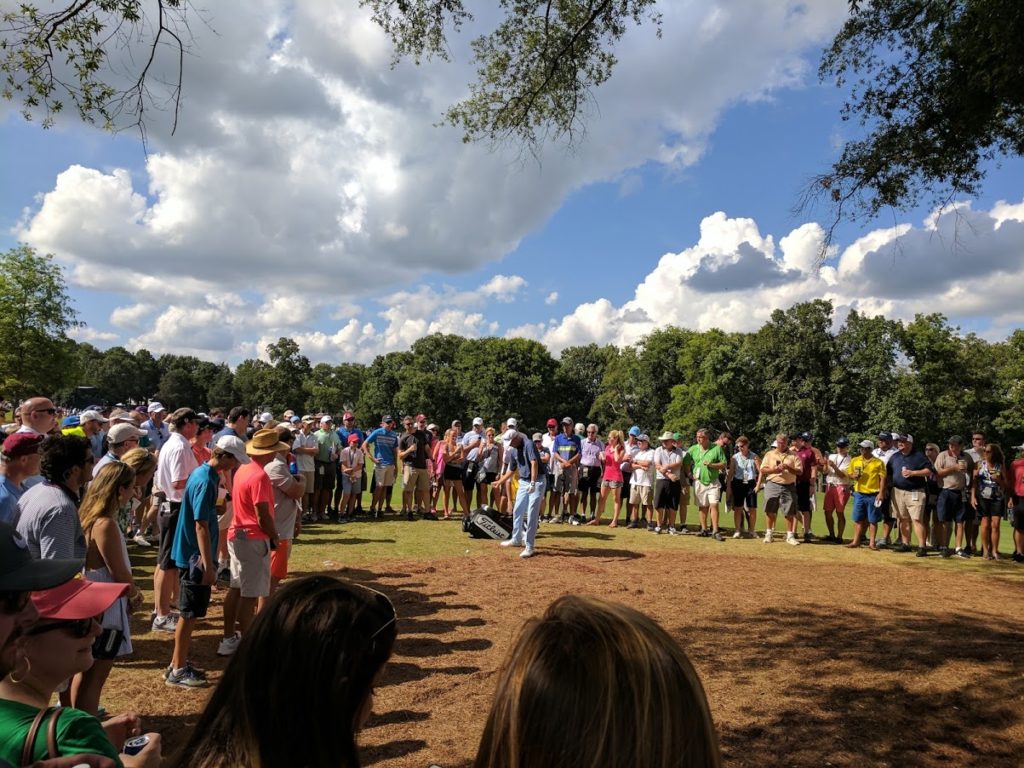 I failed to get a shot of Haas with club in hand, but it was uncanny how much it looked like he was aiming right at us. A few folks on the front line gave up their vantage point for a safer spot in the second row.

As you can guess, he nailed it. He screamed a low liner that passed in front of the gallery’s noses, around the tree, above the white fence lining the concession area and, I shit you not, in between two flags sticking up from the fence. As the ground fell away headed to the green, the ball came down softly on the sloping fairway and rolled, and rolled, and rolled right up to the middle of the green, below the pin in the back.

Back where the shot was played, fans who couldn’t see the green went full Sergio and started sprinting to see where it had landed. Huge cheers and high fives among strangers broke out. “Did you see that?!” was heard more than once. And Haas, now in the middle of a jubilant throng of fans, handed out a few fist bumps before heading back inside the ropes. 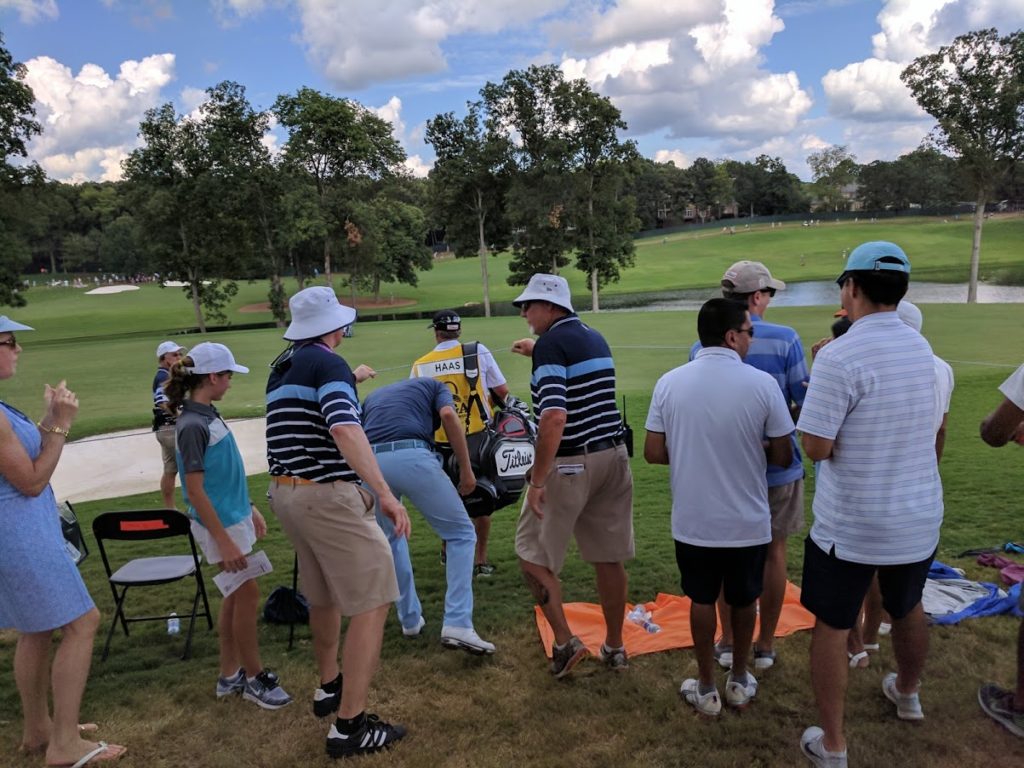 The crowd was so jacked, Haas’ caddy had to urge them to regain composure so the other golfers in the group could play from the fairway. It didn’t help much and neither of Haas’ playing partners made the green. Several fans walked back to where the ball had laid, trying to figure out how in the hell Haas made it do what it did. 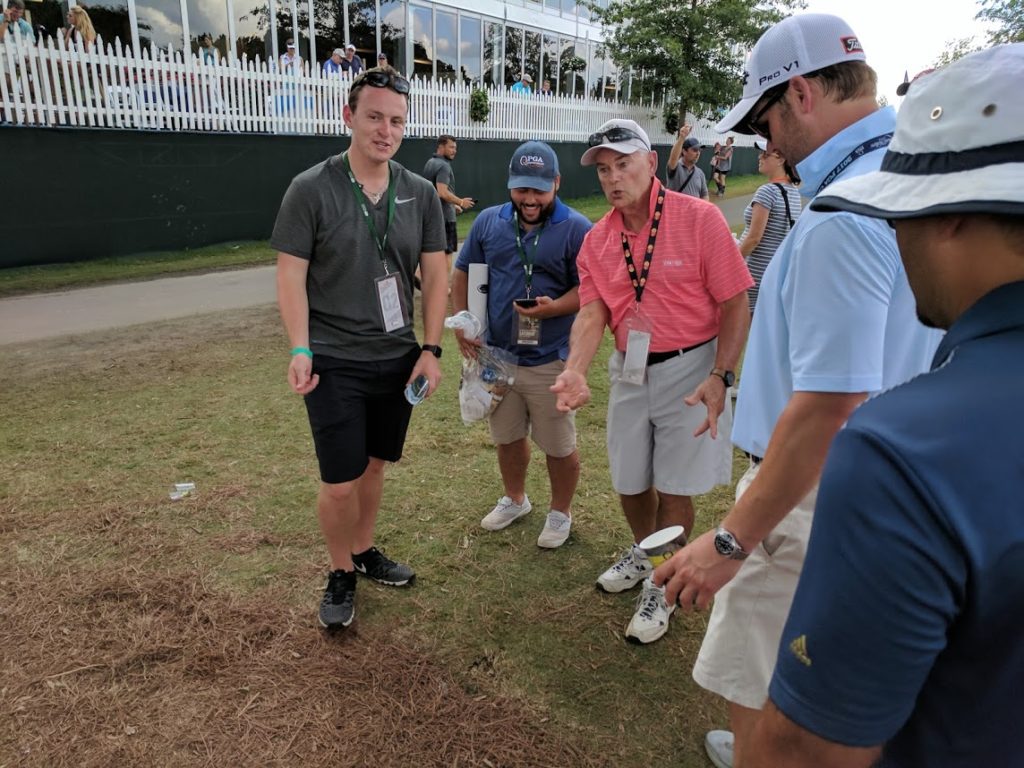 It didn’t make me like him less to see Haas immediately take his son’s hand after the round. I’m not even a Dad but my heart melted a little bit when he helped his kid who was fumbling with a candy bar wrapped as a interviewed him, quietly handing him one of the Twix bars while describing the shot. 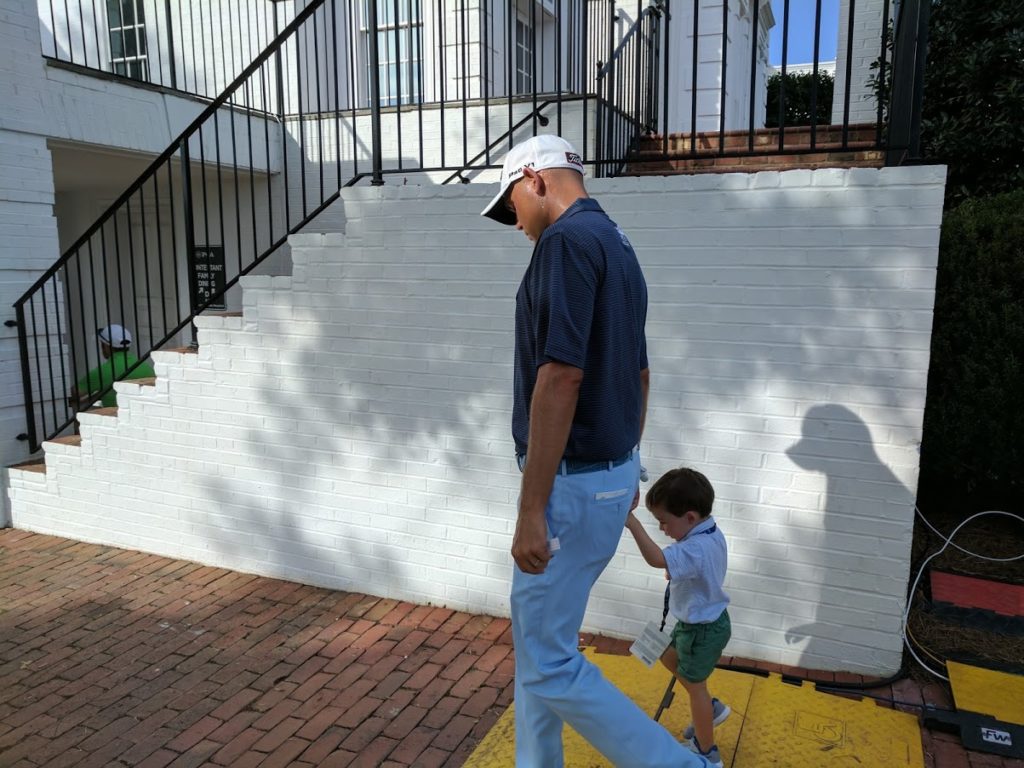 You can have a good time at a golf event regardless of whether or not you see a lot of good golf. But much like hitting just one good shot can change a weekend golfer’s round from miserable to memorable, I’m betting there were a lot of hot, tired, leg-weary fans on #16 who were wondering exactly what the appeal of sweating out a day only to see the same old fairway-to-green approaches over and over before Bill Haas arrived. And every one of them went home with a great story to tell, and a reason to come back.