CHARLOTTE — After giving older North Carolina fans stressful purple flashbacks for much of the first half, the Tar Heels finally took control to easily advance past Lipscomb 82-61 in the first round of the NCAA tournament on Friday afternoon.

It was in Charlotte, at the old Charlotte Coliseum, that the 1982 national champion UNC team struggled against another team wearing purple. The Tar Heels eventually survived the challenge from James Madison for a 54-52 victory in their first NCAA tournament game on that title run, a second-round contest.

Big lift from the bench

North Carolina (26-10) continues to start a small lineup but its big men off the bench keep giving the Tar Heels good minutes. That will be even more important against a Texas A&M team that features two 6-10 (Robert Williams and Tyler Davis) and one 6-9 starter (D.J. Hogg).

With Garrison Brooks and Sterling Manley in the lineup at the same time, UNC outscored the Bisons 13-2. Manley scored six points and pulled down a career-high 10 rebounds in 10 minutes.

“That’s a roommate connection, that’s all I can say,” said Brooks, who had seven points and three assists in 16 minutes while playing good defense inside.

There is an important X factor for most tournament runs and Theo Pinson sees the freshman big-man duo as possibly taking the role Luke Maye seized during last year’s title run.

“It’s big. It’s just the same as last year,” Pinson said. “How important was Luke coming in in the Sweet 16 and Elite Eight games? He ended up being the MVP of the whole regional, so it’s things like that that we need. You never know what will happen. Each game is different.”

Pinson was three assists short of a triple-double with 15 points, 10 rebounds and seven assists. A couple of those passes led to dunks for Manley, who says his confidence is soaring.

“No doubt,” Manley said. “Getting that first dunk and just starting to get into the flow of the game. Guys are starting to trust me more and me and G are playing well together and playing off each other so definitely getting more confidence.”

Manley, who never passed that third running test that is required before he can start, has already shown the raw skills to be a first-round draft choice down the road. He has struggled to finish his chances inside in recent weeks and to catch Pinson’s passes. He looked more polished Friday and that makes the Tar Heels dangerous inside.

“I just tell him to be ready at all times,” Pinson said. “If you want them to work for you on the other end, you have to reward them when they are rolling to the basket.

“I try to anticipate a little too much, but I just try to tell my teammates, ‘look, have your hands ready. You don’t know when I’m going to throw it. I might see you open even before you know you’re open.’ “ Pinson said. “I just want them to have their hands ready at all times.”

Kenny Williams, who scored a game-high 18 points and made four 3-pointers, said the Manley and Brooks gave the team a boost in so many ways.

“Sterling did a good job on their big man, making it hard for him to score. They controlled the boards also when they were in the game,” Williams said of Manley and Brooks. “That’s going to be big in the next couple of weeks. We can rely on them for a couple of minutes at a time. We don’t have to have five guys playing 35 minutes at that point. It helps us with the rest.”

Cam focused, and is back stronger

Dealing with pain in his back, Cameron Johnson could only sit on the bench and watch the last few minutes of UNC’s loss to Virginia in the ACC Tournament championship game. A few days of rest did wonders for him, as he collected 12 points, seven rebounds and made two 3-pointers.

He wasn’t about to declare himself 100%, though.

“I’m getting there,” said Johnson, admitting that there still is a bit of pain with lingering shoulder and back issues. “A little bit, but there’s always pain somewhere when you play. It’s feeling better than it has the last couple of games.”

And, of course, he’ll be happy to get two more days of rest before Sunday’s second-round game.

Every NCAA tournament venue has that guy. 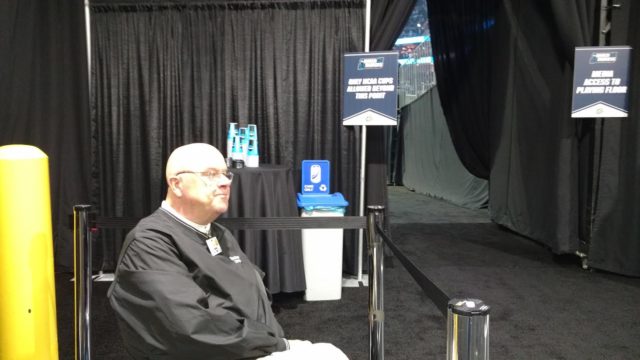 He is there to prevent the horror of a member of the media showing up inside arenas with drinks in cans that have — gasp — logos that are for companies that aren’t NCAA sponsors.

At the cable-sponsored Charlotte arena, Bob Edwards was the guy. He was there before noon and said he’d be on duty until midnight.

He has two jobs: Make sure that everybody who passes through his assigned portal has a media pass and, most importantly, any drinks are poured into one of the blue Powerade, Coca-Cola-branded NCAA cups.

Edwards reported, as of mid-afternoon, that most of the media were compliant, although some complained that they couldn’t take their YETI containers into the arena. Edwards maintains his thirst for compliance.

We can only hope that nobody slipped through and allowed TV viewers to see anybody drinking from anything other than those cups. The consequences otherwise would no doubt be dire.

Crazy for a Dookie to be in Charlotte?

It didn’t matter that her beloved Blue Devils were in Pittsburgh and the rival Tar Heels were in Charlotte, Ann Elmer of Wilmington took in the action and proudly wore her “Cameron Crazies” T-shirt. 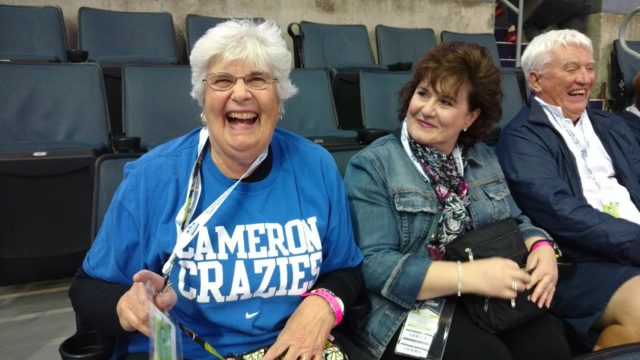 “Well, it is an ACC team.” But will you cheer for Carolina? “It is an ACC team,” repeated Elmer. According to her daughter, Elmer loves Mike Krzyzewski.

So, a Blue Devil admitting to cheering for the Tar Heels might be unspeakable.

Is there another mascot in college sports that is creepier than Providence’s “Friar Dom”? The hauntingly odd-looking mascot was back in North Carolina for the second time in three years after showing up in Raleigh in 2016.

Is this zombie-looking apostle really supposed to fire up Providence fans? It’s more likely that the ghoulish mascot will spook and terrify opposing free-throw shooters.

He had a dance-off with one of two Texas A&M’s “Yell Leaders” late in the first half. Dom acquitted himself well dancing to, of all tunes, “Uptown Funk.” The crowd, by its applause, gave Dom the victory.

At least fans won’t be thrown into a funk by Dom on Sunday.

Eric Montross is the color analyst for the Tar Heel Sports Network, but added duties made Friday a long day at the arena.

The center on the 1993 national-championship team worked UNC’s victory over Lipscomb, of course. In the evening, though, he was the color analyst for Westwood One’s national radio broadcast of the evening doubleheader of Creighton-Kansas State and Virginia-Maryland Baltimore County. He took over for former Georgetown coach John Thompson, who was the color analyst for the afternoon doubleheader. 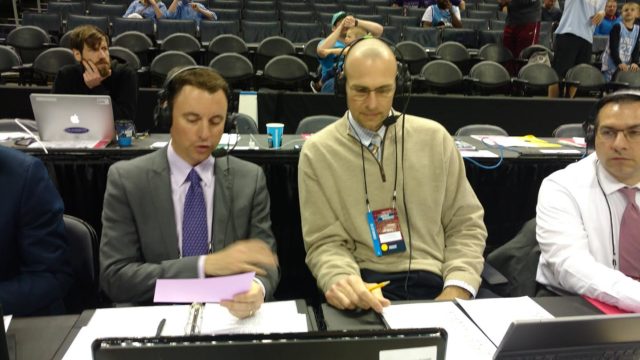 It’s the third consecutive season that Montross also has done games for Westwood One. Friday was the first time, however, he’s worked with play-by-play announcer Kevin Kugler.

The Tar Heels will face a tougher challenge Sunday against No. 7-seed Texas A&M (21-12), which held Providence scoreless for more than four minutes late in its 73-69 victory on Friday. The only common opponent is Tennessee, with both games in Knoxville. UNC won on Dec. 17 77-73 and the Aggies lost on Jan. 13 75-62. Davis leads the way for Texas A&M, averaging 14.5 points and 8.8 rebounds per game. In the win over Providence, he collected 14 points and 15 rebounds.