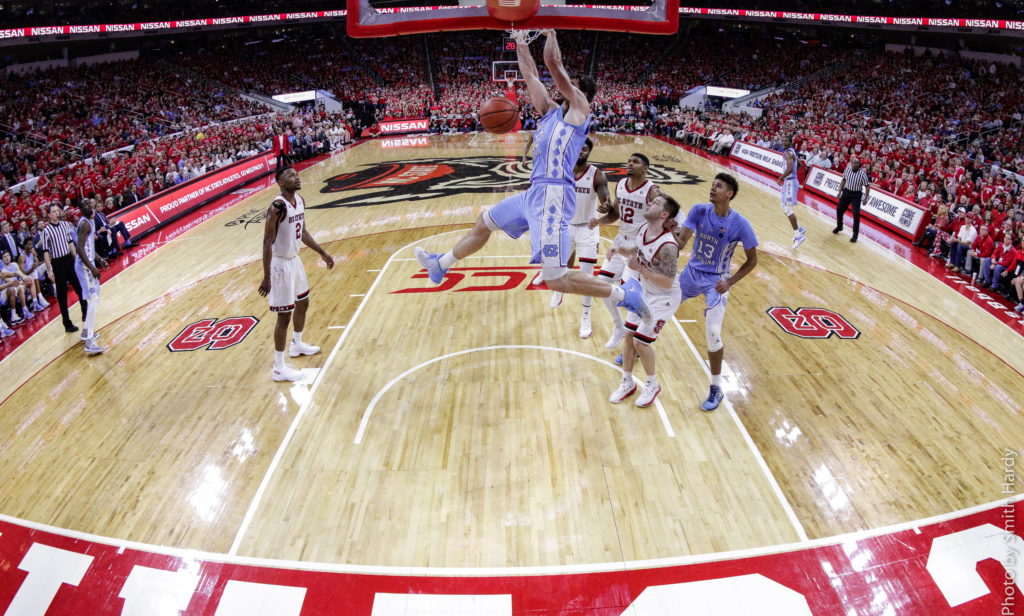 It took him until the start of the second half to figure out how to use them. But, boy did he use them. Maye scored 27 of his career-high 33 points in the second half as North Carolina held on to beat N.C. State 96–89 and avenge a defeat in Chapel Hill two weeks earlier.

A 3-pointer near the end by Cameron Johnson was huge in the win over Duke. Making that big 3 this time around was Kenny Williams — only his second 3 of the game — and it all but put the game away to put UNC up five with 1:13 left.

The Tar Heels countered a 19–0 N.C. State first-half run with a 22–7 run of their own late in the first half and early in the second half to seize the momentum.

It’s Luke Maye’s 🌎 and we’re just living in it.

Theo Pinson is a guy who is used to hearing groans when he looks like he’s getting ready to try a 3-pointer. He was silently groaning at one point Saturday when Maye fired up a shot.

“There was one that he shot from the right wing and I passed it to him, and he shot it,” said Pinson of a play at 57 seconds in the above video. “First of all, I was like, ‘that’s a terrible shot, I’m not crashing [the boards] because that was so deep.’ And when he caught it, I said, ‘y’all are in trouble. He is balling.’ After that one, I was like, ‘he might go for 40 tonight.’ It felt like it.”

Pinson wasn’t the only one wondering about Maye’s shot selection.

“A couple of them were like ‘oh no, we don’t want that one,” Berry said. “But they went in, so you can’t say anything. He’s just a different player than what people are expecting and it’s just hard to guard him when he’s at five. We just did a great job of trying to change our cuts and, as coach always says, if you’re going to take a shot, have enough balls to make it and he took the shots.”

His 15 field goals were the most by a UNC player in a game under Coach Roy Williams.

“I missed a lot of easy ones in the first half and was just trying to get back into a rhythm,” Maye said. “I feel like I did in the second half.

“I felt I could drive, and I really didn’t get to the basket very much in the first half and kind of shooting it a little soft,” Maye said. “So, I just challenged myself to really get out there and take it to the basket. And, once I got some easy ones, I just started shooting it and it started falling and, man, when it’s falling like that, you just continue to play and basketball gods are looking out for you.”

Asked if he somehow gained Paige’s PNC Arena powers, his modest, deadpan response was that, “I think me and Marcus are totally different players.” He also said that it wasn’t about the career-high but about the victory.

“They started focusing on him a little bit more and that opened up driving lanes for us,” Pinson said.

Carolina has a player in Pinson with playmaking ability who is dangerous when he drives the lane. The Tar Heels also know that Pinson has been struggling mightily all season from 3-point range and that all four of the other starters are dangerous from the perimeter.

That makes for an effective tool at Williams’ disposal that the Tar Heels have been working on in practice for a while but didn’t really use in a game until Thursday night’s win over Duke.

They create a clear-out situation with the ball in Pinson’s hands near the midcourt circle at the start of the possession, then let him create off screens late in halves.

UNC used it again Saturday and the results have been productive.

“It’s just hard to guard it when you’ve got the four man that can basically play one through five and then you’ve got Luke coming out setting the screen, you just don’t know what to do,” Berry said of the trouble the setup creates for defenses. “And then you have shooters spotted up around the perimeter and it’s just hard to play it and Theo’s a playmaker.”

Berry said the reason UNC deployed the tactic against Duke was the struggles that coaches saw the Blue Devils having against pick and rolls and the fact that they want to switch on everything.

“We have somebody who is willing to pass the ball and create for somebody else, it’s just hard,” said Berry, who scored 16 points and now is 22nd on UNC’s all-time scoring list. “You don’t know if you should help in and then when you have a guy like Luke at the five, sometimes he can pop and sometimes he can roll and you just don’t know what to do. You are on your toes and that’s what throws the defenses off.”

Pinson, who collected 11 points and seven assists, is glad to go to that alignment because he says that it plays to his strengths.

“When I’m up at the top and we’ve got a four-five screen with me and Luke, you have to pick your poison,” Pinson said. “So, when we go to that, we’ve got four shooters out there and the way Luke was cooking today, you don’t want to help off of him and I can take a five. Then, once I get to the basket, if you help, I’ve got shooters around me.”

PNC/NCSU security talking to a fan who had his hands on Brandon Robinson as a ball went out of bounds. It appears fan (in backwards hat) may have been removed or re-located. pic.twitter.com/soJjWgNykN

An N.C. State fan in a courtside seat on the opposite side from the UNC bench made contact in the second half with Carolina’s Brandon Robinson, but only to try to help him not crash into the row of seats next to the baseline. When Robinson walked by the fan after that, he told the fan, “don’t touch me.” The fan said something back to Robinson.

Arena security checked in on the fan shortly after that and warned him to stop yelling at the Tar Heels players. A few minutes later, after he persisted and (while using salty language) said what he might do next time, the security officer motioned for the fan to walk away from his seat.

A few minutes later, the fan came back to his seat to get his coat and told a friend, “I’ve got to roll.” At that point, he apparently was ejected from the arena.

Here are those fans, formerly courtside, being escorted out, apparently. pic.twitter.com/bP1acRczSR

The Cameron Crazies traditionally come up with clever signs when Carolina visits. N.C. State students sometimes fall short of the bar set over at Duke but get A’s for their efforts.

You be the judge. 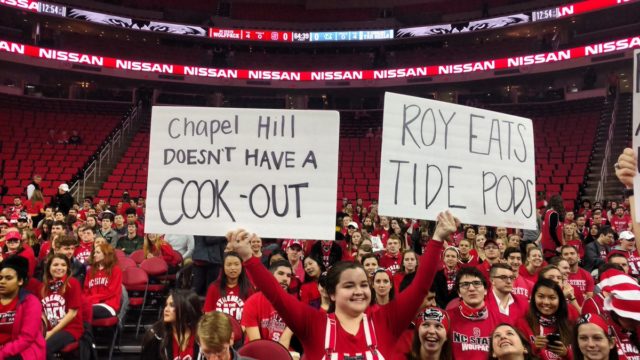 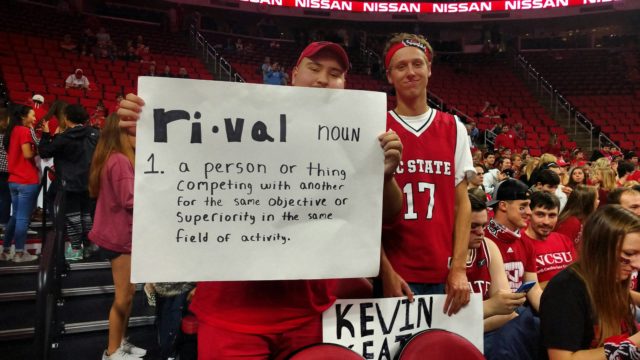 Berry notably contended before the Tar Heels’ game with Duke that he didn’t consider the Wolfpack to be UNC’s rival. One State student, we assume hoping to help Berry out, offered a definition of “rival” that most dictionaries won’t dispute.

We’re thinking that this won’t change the opinion of either Wolfpack fans or Berry.

And, of course, State students couldn’t get by without a shot at UNC after the NCAA investigations ended with no penalties. 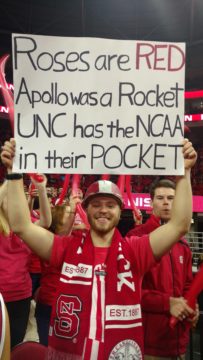 Of course, it should read “its” instead of “their.” But the NCAA probably also doesn’t penalize for grammar mistakes, either.

The best of the lot: A sign that was shown on the screens above center court with an NBA 2K logo on it: “Berry’s real rival.” 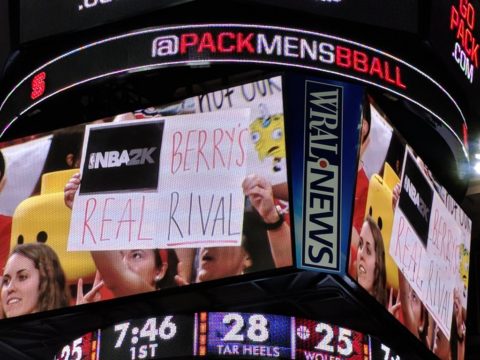 One hour in, the floor is nearly gone. This PNC crew works quickly. pic.twitter.com/Kg46iBlaRr

It was the quickest turnaround of the N.C. State and Carolina Hurricanes season for the crew of the bank-sponsored former ESA. The workers had only around four hours between the end of the Pack’s game against UNC and the opening draw of the Canes’ game against the Colorado Avalanche. It generally takes the 65-person crew about 90 minutes to complete the conversion.

By 5:40 p.m., the conversion was nearly completed: 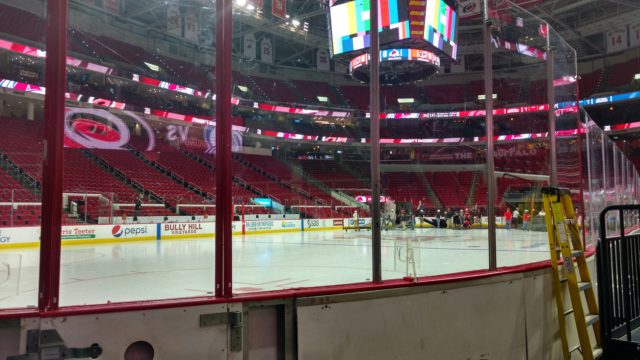 Got to shadow the PNC Arena crew & watch them change over the arena from basketball to hockey.

But if Luke is a Force projection, did he really touch the ball before it went out of bounds?