Was treatment of FBI story–on the web, in print; national and local–a fair presentation?

Many national media outlets were guilty of lumping together all the players and schools mentioned in a Feb. 23 Yahoo! report about the FBI college basketball investigation.

While the stories by The News & Observer/Herald-Sun writers were fair — and there was extensive coverage — the displays in print editions made it seem like the accusations were similar.

A lot of Twitter users, including a journalism professor at UNC and a sports editor of another North Carolina newspaper, “liked” the above tweet, which shows The N&O’s Feb. 24 1A treatment of the story.

“This is one of those situations where it feels like we’re going to get criticized no matter how we handle it,” Robyn Tomlin, the executive editor of The N&O and Herald-Sun, said via email.

For websites, you might wonder if North Carolina or Duke were inserted in headlines, despite the minor allegations, to elicit clicks. In a print edition, there would appear to be fewer such motivations even though that 1A display was above the fold and clearly visible in a rack.

The front-page photo in The N&O of former N.C. State guard Dennis Smith Jr. (who the Yahoo! report alleged that documents show took loans from an agent) was the same size as for two players only linked to meals with agents (Duke’s Wendell Carter Jr. and former UNC player Tony Bradley).

“While all of our stories make it clear that there is a big difference between the types of infractions alleged in the FBI documents, some readers are going to see bias in our presentation choices no matter what,” Tomlin said.  “In the end, players from all three teams are mentioned in the report, and we presented that visually.”

The main photo on the N&O’s sports front was of former UNC star Brice Johnson (also linked in the report to a meal with an agent), while there was a much smaller photo of Smith at the bottom of the page. Tomlin said that she heard more criticism of that display than for the 1A treatment.

At The Herald-Sun, there was no photo of Smith on 1A that day and, instead, a photo of Carter. 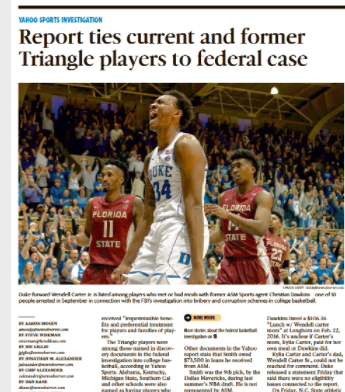 “In The Herald-Sun, most of the readership is in Durham, so they focused visually on the Duke player mentioned in the report,” Tomlin said.

Durham’s sports front featured Carter in the main photo along with a smaller Johnson photo, with a Smith photo at the bottom.

The designs for both papers — along with 10 others — are produced in Charlotte at McClatchy News Desk East, but Tomlin said that her teams in Raleigh and Durham “work closely with them to provide guidance and feedback.”

One of the potential downsides of having consolidated desks produce so many newspapers is that there may not be time to create out-of-the-box designs, take chances or try new approaches. Instead, the front pages seem templated because they have the same basic structure so many days. Photoshop never is used to make designs flashier by using cutouts.

The above three-story layout for the last N&O sports front of February should look familiar. Of the 56 sports fronts in The N&O and The Herald-Sun last month, 47 had that structure for the five-column page format: A story anchoring all five columns at the bottom of the page, a one-column story on the far left going from the top of the page to above that bottom story and a four-column package taking up the rest of the page.

Having only three stories on a sports front can allow some creativity and keep the design from being too busy. But the only variety comes with the size and placements of the photos and headlines.

Many times, headlines in the print edition are identical to the website headline, even if the headlines are too long for print. 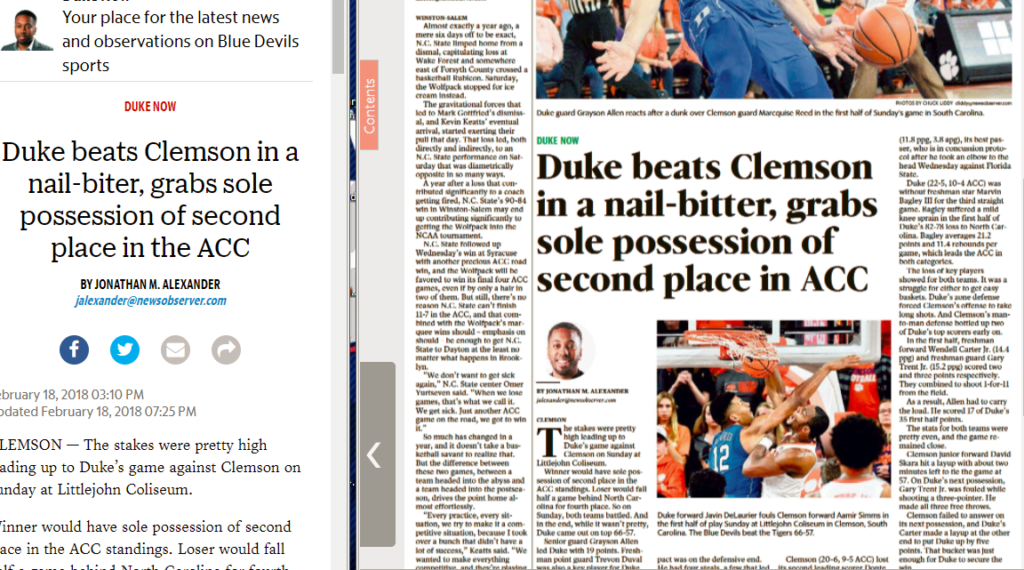 The only substantially different layout came in the Feb. 28 Herald-Sun: A story across the top, a 3-column story as the main package and a 2-column story on the right.

The good news for N&O readers is that the deadline for the last page to be done was moved 30 minutes later last weekend. That deadline now is 8:30 p.m. Sunday nights for Monday’s newspapers through Friday nights for Saturday’s newspapers and 8:10 p.m. on Saturday nights for Sunday’s newspapers. The Herald-Sun’s deadlines remain 7:45 and 6:45. The N&O also still has the option of replating (updating) pages for late editions up until 10 p.m., an option not available for Durham.

A March shift in coverage

Until March, as reported in this space, there had been no game coverage of N.C. Central from the consolidated N&O/Herald-Sun sports staff and the only women’s college game covered was Sylvia Hatchell’s 1,000th coaching victory.

The staff also covered the games involving Triangle teams in last week’s ACC Women’s Tournament, either with stringer Kip Coons, who has covered non-revenue sports for The N&O for years, or Joseph Ochoa, an N&O sports clerk, reporting from Greensboro.

The BH Media Group, which owns the News & Record of Greensboro and the Winston-Salem Journal, laid off numerous newsroom people at many of its newspapers Feb. 18, cutting 148 positions and not filling 101 vacant positions, according to the Triad Business Journal. While there were several layoffs in Greensboro and Winston-Salem, the sports departments at both newspapers escaped cuts this time.

The BH Media papers in Virginia weren’t as lucky with last month’s cuts. The sports editor of The News & Advance in Lynchburg was laid off and isn’t expected to be replaced.

Alex Tichenor, the only sports writer at the Danville Register & Bee since September 2016, was laid off. The newspaper will continue to run college sports coverage from other BH Media Group newspapers in Virginia, including the Roanoke Times and the Richmond Times-Dispatch and The Daily Progress of Charlottesville. It’s unclear how the paper will produce coverage of local sports.

“I knew that this was part of the deal when I chose this career,” Tichenor, who joined the newspaper in August 2016, said via Twitter direct message. “Didn’t think local sports would ever be completely eliminated, though, which is the route it seems some papers are going. The local people I’ve told have been upset for sure.”

Also winning a top-10 beat-writing honor in the 75,000-175,000 category was Brooke Pryor of The Oklahoman, a former North State Journal and Herald-Sun writer who is a UNC alum.

The Fayetteville Observer won top-10 special-section honors in the under-30,000 category.

Also last month, The N&O won North Carolina Press Association awards in the over-35,000-circulation category for sports-related coverage, including third-place awards for best video for  “The voice of the Tar Heels, Woody Durham, lives with a painful silence” and for sports coverage.

Jacobs won first place for sports columns from the submission of three columns:  “White House sports salutes fraught with political drama,” “Among a group of ground-breaking African American players at Wake, a star QB,” and “Coming to grips with Allen’s Actions.”

The North State Journal won several awards in the under-3,500 circulation category, including first place for sports coverage.

Also given out on the same night as the NCPA awards were the N.C. AP News Excellence Awards.

The Herald-Sun’s Colin Warren-Hicks won two Walter Spearman Awards for outstanding writing by a journalist with two years or fewer of experience at a daily newspaper. In the 12,500-35,000 circulation category, he won first place for “He Sat Behind Duke’s Bench at Cameron for 37 Years — and Coach K shook his hand before each game” and second place for “He could be a world champ, veteran ring trainer Turner says of The Bull City Bully.”

Some streaming options go away for NCAA tournament

Many fans have enjoyed turning down the sound on the television and listening to the radio network for their favorite team instead. Fans of Duke, N.C. State and UNC have been able to do that, thanks to the TuneIn app that allows users to pause the stream to sync it to the TV coverage.

The ACC Tournament games appear to be the last for which that will be an option. Because of NCAA rules, the only stream you’ll be able to listen to on apps during the NCAA tournament will be the Westwood One national broadcasts.

You still might find a network station streaming your favorite school’s radio broadcast even though they aren’t supposed to do that. Even then, you won’t be able to pause the broadcast to sync it to the TV.

In a story that took months of work, ESPN.com’s Baxter Holmes wrote about how Kinston escaped a near nuclear disaster in the early 1960s and has suffered through devastating hurricanes and floods and a major economic downturn. But the love of basketball has endured in a town that has produced its share of NBA talent. (I can confirm his reporting about the huge crowds when Jerry Stackhouse played for Kinston High School since I covered his first two seasons as a Viking.)

Ahead of last weekend’s UNC-Duke game, Shaker Samman wrote in The Ringer about the legacies that Joel Berry and Grayson Allen have built in the ACC after being AAU teammates.

Also ahead of that game, C.L. Brown wrote in The Fieldhouse (The Athletic’s college basketball site) about sharpshooting freshman Duke guard Gary Trent Jr. Trent always was challenged get the most out of his ability growing up by his father, who played nine years in the NBA.

How could two kids from North Carolina, Ky Bowman and Jerome Robinson, end up playing basketball at Boston College instead of one of the ACC schools in this state? Joe Giglio of The N&O and Herald-Sun explained how that happened.

DeCock talked to 82-year-old Pinehurst resident Bill Reichart, who was the captain of the U.S. Olympic hockey team 54 years ago.