Could the days of a sports writer covering high school sports for multiple decades at a large newspaper be numbered?

Earl Vaughan Jr. roamed the prep sidelines for the Fayetteville Observer for 43 years until 2016 and Tim Stevens did it for most of his nearly 50-year career, the last 15 as preps editor at The News & Observer, until 2015. Both are retired and in the NCHSAA Hall of Fame.

Most sports writers with their talent aspire for college or professional beats. Vaughan and Stevens were the rare writers with no interest in covering anything else. That’s part of why they stood out, along with Langston Wertz Jr., who has covered preps at The Charlotte Observer for 30 years.

Mike Blake, who took over as The N&O’s high school sports editor after Stevens retired, is in that group of writers who prefers covering preps.

Given his love for the beat, he could have been one of those writers who spent nearly their entire career on the high schools beat. Blake said that if the newspaper business was like it was before around 2005, he could see himself staying in that position for a long time.

Instead, his last day at The N&O is Friday, and he will teach English at Raleigh’s Cardinal Gibbons High School. With lateral entry, his 10-year newspaper career counts as experience in the field, meaning he isn’t starting at the bottom of the salary scale.

“My mom was a teacher,” said Blake, who started looking for a teaching job in February. “In the back of my mind, I always thought, if I wasn’t in journalism, maybe I would be a high school coach or be a teacher somewhere.”

He probably will be one of the few high school teachers with a verified check mark on his Twitter account. He’ll only visit one high school regularly after working in a job that led him to visit 162 high schools.

“I knew that, with a growing family, I couldn’t really afford to be caught unaware, unsuspecting and not have something lined up,” said Blake, who has a 4-year-old son, a 2-year-old daughter and a daughter born a few weeks ago with his wife of five years. “My mentality of wanting to finish my career at The N&O I had to change, just because I didn’t really want to cover another beat there, so I just started looking and thinking about what I would do outside of journalism.”

They say all good things must end some day.

Well, covering HS sports was a very good thing. Now it must end.

Here's my note to all of you (turn the phone sideways to read the heartfelt novel) who have been there for the decade-long ride. pic.twitter.com/zo2FGErVT0

“I had to improve our situation and, thankfully, I found something,” said Blake, who informed his editors of his decision last week. “Because my kids are so young, it’s something I’ve had to focus on and think about as far as career aspirations. Definitely a more secure field. Journalists rank pretty low on job security for a lot of years running, which is unfortunate.”

At least at the start of the school year, Blake admits that it might be more overwhelming than it has been trying to keep up with around 130 high school sports programs. To most people, staying knowledgeable about that many schools would be quite daunting.

“I wouldn’t trade it for anything,” Blake said of his time at The N&O. “I really enjoyed my 10 years doing something that I love at a paper I grew up reading. Going through college, I wouldn’t have imagined that I would have to be thinking about teaching as a way to better provide because it was a really good profession when I was heading into college. Not so much when I left it.”

Robyn Tomlin, the executive editor of The N&O and The H-S, said that it hasn’t been determined if the open spot left by Blake will be filled. She said that Jonas Pope IV will add coordination of prep sports coverage to his recruiting-beat duties “for the time being.”

“We’re all sad to lose J. Mike, but we’re happy that he’s moving to another mission-driven field where he can make a difference in the lives of so many. We wish him well,” Tomlin said via email.

Pope, who was on the N.C. Central beat before shifting to recruiting in December, covered his share of high school games for The Herald-Sun before that sports department became part of a consolidated department with The N&O.

“We’re sorry to see Mike leave,” Steve Ruinsky, the sports editor of the consolidated staff, said via email. “A big loss. He’s done a great job with high school sports coverage. He cares so much about it.”

Although Blake worked part-time at WRAL.com while an N.C. State student, he never has previously worked full time outside of The N&O or its affiliated publications. It was while covering N.C. State football and basketball for WRAL.com that he developed the preference for covering preps.

“It just wasn’t as fun,” Blake said of covering the Wolfpack for one school year. “There was something kind of neat about going to a high school and having a coach want to talk to you and the athletes being very original in their answers, excited to have a conversation about the game rather than kind of what happens at the Division I level, where athletes are giving you clichés and coaches want to get in and out of this press conference as fast as possible. 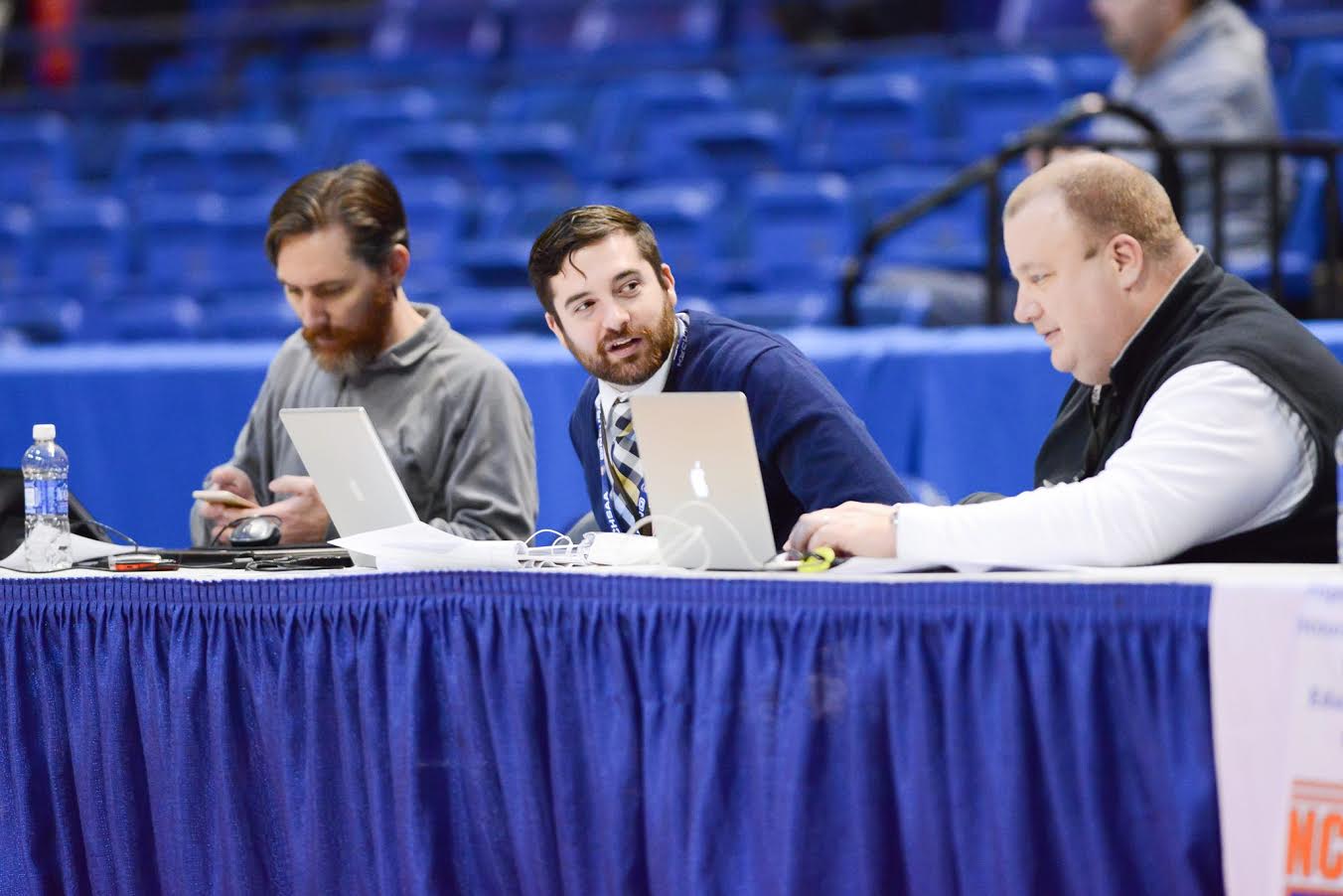 Mike Blake (middle) is happy to inform his colleagues that the wireless IS working at some NCSHAA championship.

“So, it’s very refreshing because the athletes turn over so much. You’re also this keeper of high school history that could easily get lost. Those are things that really kind of interested me and I just love the state of North Carolina,” he said.

He says one of his mentors in his reporting career, who he met while at WRAL.com, has been Tom Suiter, the retired longtime WRAL sports anchor and “Football Friday” host.

“I still talk to him a few times a year. Just watching him was just a great example of how to model yourself,” Blake said.

Blake grew up in western Harnett County reading Vaughan and Stevens, as well as the prep coverage in The Sanford Herald.

“It was neat to work alongside of them. I could see the joy they had in it and I knew I wanted a part of that as well. I wanted to cover a beat that was fulfilling and meaningful,” Blake said, comparing that to writing about the third-string quarterback or the offensive line for a college team. “I wrote those stories when I was covering State, but this was so much cooler to go to a rival soccer game and talk about the kid who saved the day with a goal in the last minute.”

Blake’s job evolved with McClatchy’s reinvention initiative, and was very different from the one Stevens held for years.

“It’s nothing like what he used to do,” Blake said. “It is vastly different. In some ways, the things he did would have worked very well and what reinvention wants, like the big story. He had long-form stories, but they did well online. The immediacy of getting things up and using video and mixing that in, that was very different. Not having freelancers to send out each Friday or during the week, that clearly was a much different job than the one he left behind.”

Blake said he felt the pressure that the reinvention initiative put on his beat.

“I have no problem rethinking how we did high school sports, it was just that as McClatchy’s corporate people were leading all these different workshops, almost every single workshop, the example that was given of something that doesn’t fit in the new model or something that doesn’t attract readership was high school sports game stories,” Blake said.

There were no longer game stories until playoff time, he couldn’t send stringers to games and there was a heavy shift to video. In the last school year, Blake shot around 110 videos from various games.

“What bothered me was that high school sports felt like it was this whipping boy and when you are the example of something that doesn’t work and that’s your beat, that’s a little uncomfortable,” he said, pointing to a McClatchy newsletter that spotlighted a newspaper in a small market that “proudly trumpeted how every story they did got at least a thousand hits and, in part of the bullet points, they were bragging about that they dropped high school sports. When McClatchy is bragging about that, it’s not a very good feeling.”

The prep coverage shifts started when The N&O eliminated all of five sports editor positions at its 10 community papers in November 2016. Those community newspapers, including the Cary News — where Blake began his time writing for The N&O — are gone. So are many staffers who contributed to preps coverage.

In spring 2017, there still was a sizable prep budget. But during the last school year, there were dramatic changes. In addition to the elimination of regular-season game stories, not all stories on championship meets made the print newspaper. Blake adjusted by including fewer details in a shorter story so that the coverage would eventually make print.

On the positive side, Blake was able to gradually restore the coverage to the traditional N&O area stretching to the coast.

“This spring, I got to at least every traditional school in those 20 counties,” Blake said. “The last one I went to was North Moore. That was important for me to do that.”

But, starting next week, the time he spends traveling will go down and his family time will be going up.

Chris Seward, who had been an N&O photographer for more than 30 years, retired June 22.

He was the newspaper’s beat photographer for Canes since 2002 and also shot some games before that. He’s shot every Hurricanes playoff game, including road games.

This past season, the newspaper increasingly relied on wire-service photos for home games.

With no photographer hired to fill Seward’s slot, the consolidated N&O/H-S photography staff is down to nine.

“The AP staffs photographers at Hurricanes games and we will assign other staffers to fill in the gaps, cover key games and do feature takeouts throughout the season,” Tomlin said.

One notable non-sports hire started this week: Jane Elizabeth joined The N&O/H-S from the American Press Institute as managing editor. Elizabeth, who was director of API’s Accountability Journalism Program, fills the spot left when Dan Barkin retired in May.

If Blake’s spot isn’t filled, though, both have staffs will each have nine and edge in sports writers falls to 7-5.

In the Chicago Tribune, Dan Wiederer  — a former Fayetteville Observer sports writer — took an in-depth look at the murder of Michael Jordan’s father, James, as one of the two men convicted in the case seeks a new trial.

On his blog, Joe Posnanski wrote about Tom Higgins, the legendary former NASCAR writer for the Charlotte Observer who died last month. He commanded respect, even from football legend Lawrence Taylor.

In the North State Journal, Brett Friedlander wrote a first-person story on a father and son bonding through their love for the Atlanta Braves, which made being in Cooperstown to see Chipper Jones inducted into the Hall of Fame special.

In The Athletic, Lars Anderson wrote about former UNC defensive coordinator Gene Chizik. After a roller-coaster career as Auburn’s head coach, he’s back living in Auburn and loving his post-coaching life.

In The N&O and H-S, Luke DeCock wrote about the improbable path of interim N.C. Central football coach Granville Eastman, from aspiring hockey player growing up in Toronto to American football coach.

On NFL.com, former Panthers wide receiver Steve Smith wrote about his struggles with depression, and how counseling has helped him.