8 Things From UNC’s Win over Michigan

CHAPEL HILL — North Carolina’s 86–71 blowout of Michigan on Wednesday was as much of a feel-good game — for the most part — as the Tar Heels’ loss to Michigan State on Sunday was a nightmare.

Senior guard Joel Berry, who had 17 points and four assists, said it was just a matter of putting that loss behind them and the Tar Heels did that, with a 31–7 run at one point.

“It wasn’t good at all, but we learned from it,” said Berry of the 64–45 loss to the Spartans. “The biggest thing I tell the guys is not to panic. We’ve had seasons where we’ve lost early and the rest of the season went well for us. So, it’s not a time to panic, it’s just a time to get better and start buying into the system.”

With 2:40 left in the first half, two Berry free throws gave UNC as many points as it had in the entire game Sunday.

Late in the game, though, the reserves again showed how bad UNC still could be. Not in a charitable mood after with the sting of the loss to the Spartans still fresh, Coach Roy Williams promptly put most of the starters back in when the Wolverines whittled a 29-point lead down to 17 with 4:37 left.

Who is the best NBA prospect for UNC? 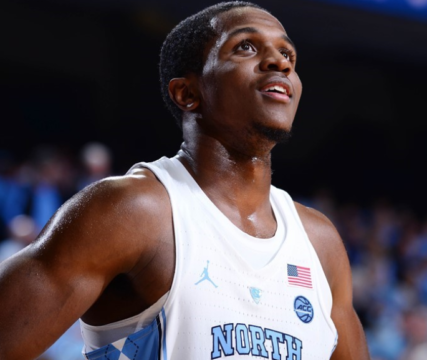 The Fieldhouse’s Seth Davis got an interesting answer from a pro scout at the PK80 Invitational: Kenny Williams.

One scout who watched the Tar Heels on Wednesday had a different answer, suggesting that Williams, in his mind, still has to prove that he can drive by opponents consistently for the junior guard’s stock to get that high.

His answer? Sterling Manley, the freshman big man, who has shown skills on both ends of the court this season. Why? Because of his length and shooting touch to go with the big body. At one point against Michigan, his behind-the-back pass helped jump-start the Tar Heels on the transition. His numbers weren’t that impressive in this game with four points, six rebounds and three turnovers.

The good news for UNC in the long-term is that he is unlikely to have a high enough stock to leave early as Tony Bradley did.

But the reality of Williams’ inability to get four-star players in recent years is underscored by an answer from another observer who works for an NBA team and was at the game: There may not be a first-round pick on the roster.

Has the big man rotation been trimmed?

Before the Michigan game, all three of UNC’s freshman big men got first-half minutes, although Brandon Huffman always got the fewest.

On Wednesday, Huffman didn’t get in until 1:13 was left in the game, along with the walk-ons, in garbage time. Before that point, it was either Brooks, Manley or Maye at the five spot.

“B-Huff came in at the end and hit a nice jumper,” said Maye, who scored 27 points to give him 20 or more points in five of UNC’s seven games. “He just needs to work on continuing to develop his game inside. It’s hard, we’ve just got to continue to play our game and Coach is going to put the guys in he thinks will give us the best chance to win and that’s all that matters.”

As he has for every game, Garrison Brooks, who had eight points and four rebounds, started.

Coach Williams’ main concern with all three is clear.

“They’re getting better, but we’re still not accepting responsibility on the defensive end,” Williams said. “If the other guy scores on us, we say, we’re going to get them [at the other end] and that’s not the way it works.

“We’ve got a long way to go with the big guys defensively,” Williams said. “They’re working at it. Sterling’s got tremendous length, Garrison understands the game, B-Huff is sort of caught in the middle, does everything, really strong, explosive. But they have to buy into the defensive end and rebounding.”

NBA rookie Justin Jackson has been squeezed out of the Sacramento Kings’ rotation of late. The Kings are only playing a 10-man rotation, and that is leaving him on the bench many nights.

He began the season as a starter and played double-digit minutes in the first 14 games. But he hasn’t played in four of the seven games since then, with a high of nine minutes.

But with what Jackson did at Carolina, he remains huge to the Tar Heels faithful. That’s obvious when the “I’m a Tar Heel” video montage is played at each game in the Smith Center. Jackson is in the prestigious next-to-last position, with only Michael Jordan shown after him.

What better time to welcome back members of the 1993 national champions than when Carolina is facing Michigan for the first time since that championship game? There were several players, a couple of assistant coaches and a trainer on hand, and they were honored, 25 seasons later, during the first half. 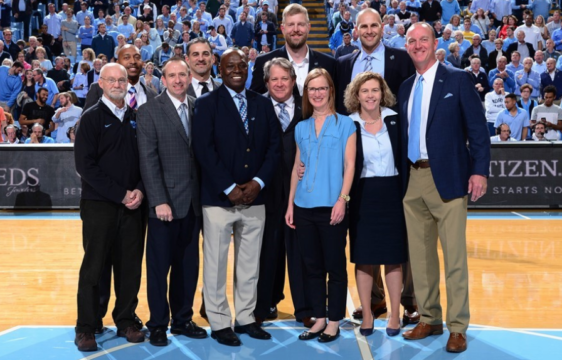 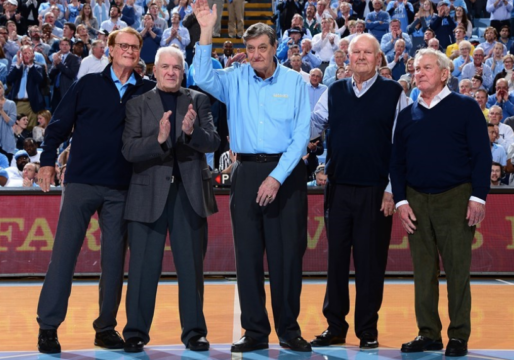 Getting “Name That Tune” all wrong

What’s the idea of “Name That Tune”? They play a song and you try to figure out who sings it and what the name of the song is, right? At UNC games in the Smith Center, they do it a little differently. As words “Name That Tune” appear on the big screens, they tell you who sings it. On this particular night, it was “Shake it Off” by Taylor Swift. By the way, isn’t it about time for that song to go away?

Maye showed off some moves