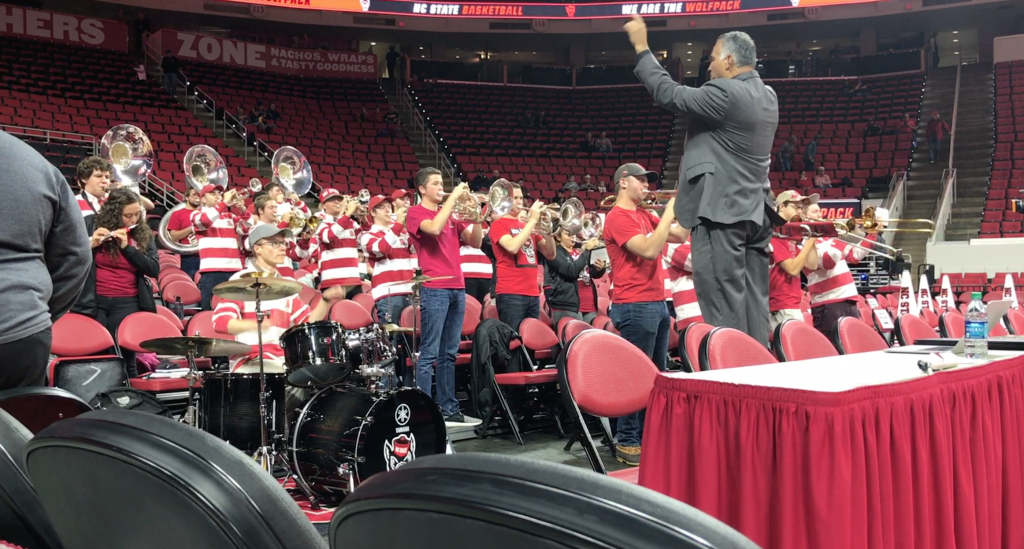 Pep Bands play music. Music is just a series of the same 8 notes being repeated in a variety of patterns. Okay, it’s a bit more complicated than that. The notes themselves change based on which key a song is in. Sometimes a song’s key can change midway through. Beyonce’s “Love on Top” showed us that a key can change several times and still rock your socks off.

But let’s just keep it simple. Pep Bands play music. Music is a pattern of 8 notes. And we are SportsChannelWhat? We’re SportsChannel8. It only makes sense.

Max… what the hell are you talking about?

I guess I oughta start from the beginning. NC State beat UNC-Asheville at PNC Arena tonight, 100-49. It was a predictable outcome. Coming into the game, we knew that NC Statfull-courtourt pressure against an extremely young team with questionable depth at the ballhandling positions would get out of hand.

So I took to Twitter and did some crowdsourcing.

What kind of postgame content do y’all want @maxgongaware to provide on “SC8: The Website” following NC State vs. UNC-Asheville?

Tonight, y’all asked for some Pep Band stuff. So here’s what I’ve got…

The Tale of the Tape

Now, it’s very important to remember that – as I break down the Pep Band video in the below tweet – YOU asked for this. This is the content you requested.

I'll be breaking down this video of the NC State Pep Band on @SportsChannel8: The Website momentarily. Stay tuned. pic.twitter.com/nBeRJkoWHJ

0:00 – 0:03 | The Band Director walks away! He literally counted the band off to get them started and then basically said “okay, y’all got this from here.” That shows a lot of trust in his drummer to keep the tempo.

0:15 | Horn Choreography! As this song enters the chorus, it’s great to see the band’s low brass section is all on the same page; pointing their horns in a variety of directions, but all together. As Nick Cannon once family said, “One Band. One Sound.”

0:47 | Our Band Director re-appears. Look – frankly – the band has been great without him. They don’t need him. But sometimes an important aspect of leadership is just being present. He’s shown trust in them by leaving them alone, but he’s showing them support by being available for them too.

1:07 | Look at that seamless transition from one song to another! Much like how a hurry-up football offense might know the sequence of an entire series of plays before taking the field, the NC State Band knows the sequence of songs they’re going to play. One quick signal from the Band Director and the next song is ready to go. Yes… it appears that’s some sort of “choke” signal to let the band know its next song is “Let Me Clear My Throat.”

1:35 | Another seamless transition into the NC State Fight Song (forgive me if this isn’t technically the “Fight Song.” Y’all know what I mean).

2:20 | Unfortunately, Twitter only allows you to post up to 2:20 of video content at a time. We had to cut this breakdown a bit short. My only real criticism of the Pep Band tonight: why aren’t they all wearing matching outfits? Perhaps there’s a process certain members have to complete before they “earn their stripes”?

The Pep Band started strong with the sequence we broke down above. There’s a lot to be impressed with there. But even more impressive? NC State’s Pep Band has the greatest Pep Band song of all time in their repertoire. Earth, Wind & Fire’s “In the Stone.”

“In the Stone” by Earth, Wind & Fire is the greatest Pep Band song of all time. Don’t @ me. pic.twitter.com/kGyrnMYTU2

The clip I grabbed doesn’t quite do this song justice. This song rules. Just trust me. Listen to the Earth, Wind & Fire version of it here.

As I began to realize that tonight’s postgame content might be Pep Band-centered, I figured this might be my chance to get an answer to one of my life’s greatest questions… And I was right!

Talkin' Out the Side of Your Neck pic.twitter.com/gKTupthEN0

Turns out that’s Cameo’s “Talkin’ Out the Side of Your Neck.” It also turns out that the Pep Band version is about a million times better than the original version (imo). 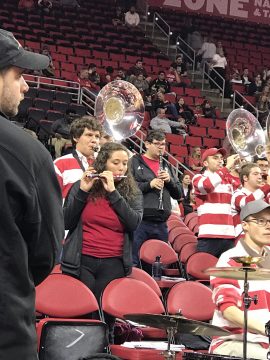 If you’re familiar with my prior work at SC8, you know that the Pep Band culture is a world I’ve conducted work in before. In 2017, I profiled Rachel Schueller, AKA the Miami Pep Band’s Piccolo Girl.

Tonight, I couldn’t help but notice NC State has a Piccolo Girl of their own. But she’s all by herself. I don’t have the full story on this yet, but rest assured, I’ll tell it if I discover it’s a story worth telling.

There you have it, folks. The Wolfpack gets the easy 100-49 win over UNC-Asheville. And you really, actually, for some reason, just read a postgame article about the Pep Band. Thank you so much. And be careful what you ask for.