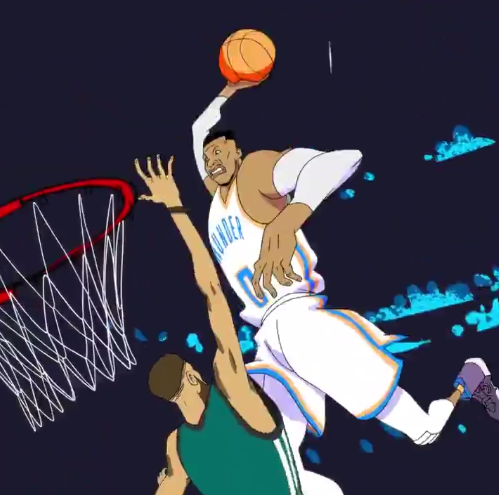 The ultra-athletic and sartorially slick Russell Westbrook took home the MVP award at the NBA awards show Monday night, and deservedly so: he averaged a triple double for the season.

Naturally in the age of immediate marketing, Westbrook’s shoe company immediately put out a new spot on twitter to commemorate the occasion. The ad uses cartoon illustration (amazingly, even the caricature of Russ seems fairly close to what the real thing looked like this season) and an MVP Trophy explaining however you look at the numbers, it all adds up to ZERO (meaning Westbrook, because that’s the number he wears).

You’re looking for an MVP and don’t know who to pick,

Listen to me kid, I’ll show you a trick

Just add all the box scores and the analytics

Multiply by the number of known statistics

It plays like a SchoolHouse Rock number for the 2017 NBA (coincidentally, there is an old Schoo 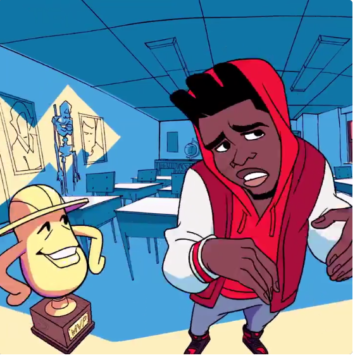 lHouse Rock on math entitled “My Hero Zero”  that led to a fairly chill cover by The Lemonheads). And while Westbrook may have gone home with the MVP trophy, the MVP of the video is the actual MVP Trophy.

And that MVP Trophy is voiced by NC-based rapper Phonte (aka @phontigallo). Phonte was part of the critically heralded and criminally underheard NC-based trio Little Brother that also gave us Big Pooh and 9th Wonder. Currently he does a variety of projects including TV, solo work and with The Foreign Exchange and he was an essential part of last year’s VH1 movie “The Breaks“. It’s no surprise to see him getting more work using his musical/lyrical skills in a place outside of traditional album-making and touring, which is becoming more and more the norm for performers these days.