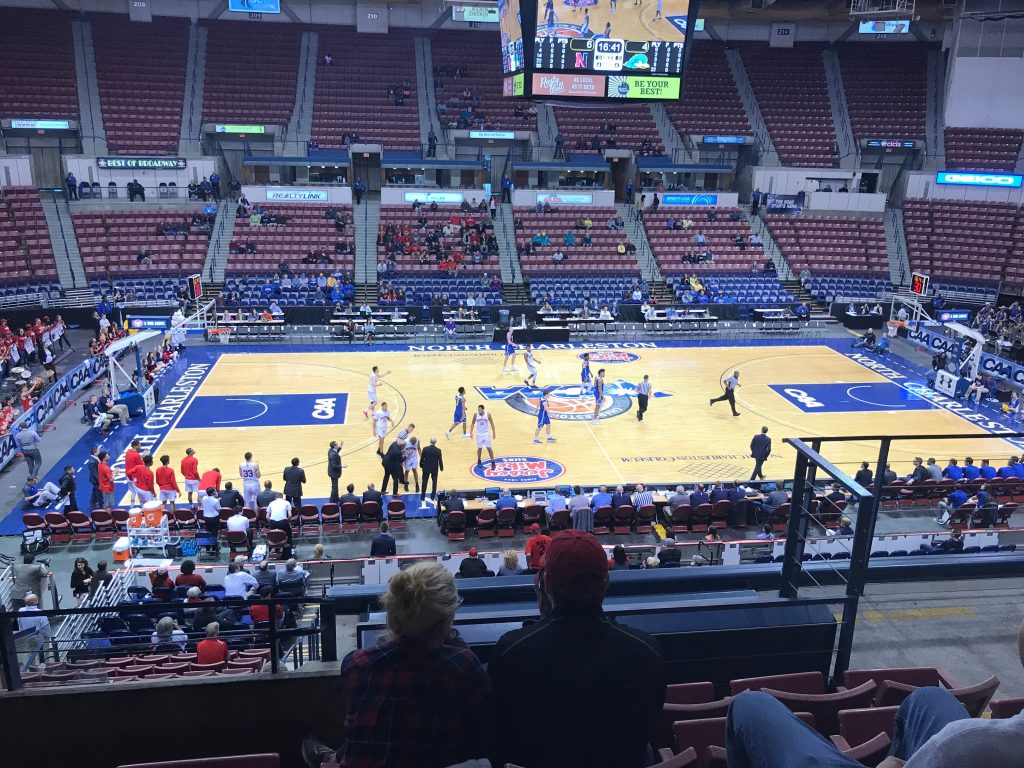 Earlier this week, I wrote about year one at Schar Center (Elon’s brand-new basketball arena). What I did not write much about, however, was Elon’s actual basketball season. The Phoenix collected wins in three of its final four regular season games (including back-to-back dominant road wins over James Madison and Towson) and appears to be playing its best basketball of the season heading into the CAA Tournament. But does the recent stretch of strong play actually tell us anything about what to expect in Charleston?

How the Phoenix got here

Elon opened its regular season boasting a starting lineup with five seniors: Dainan Swoope, Steven Santa Ana, Sheldon Eberhardt, Tyler Seibring, and Karolis Kundrotas. While picked to finish eighth (out of 10) in the CAA, Coach Matt Matheny’s squad looked like a team with the enough seasoned experience to surprise some folks.

Unfortunately, Elon quickly woke up from the dream of having a “seasoned and experienced lineup.” Bothered by a lingering ankle injury that was originally suffered last season, Swoope (a three-year staple at point guard) opted for surgery and a medical redshirt after playing in just five games this season. Kundrotas (a three-year reserve who was given his “chance” as a senior) was removed from the starting lineup early in the season and has played 22 total minutes in CAA play. And Eberhardt (previously a valuable, but inconsistent bench player) has slipped back into his “sixth man” role, where he seems most comfortable and is having a good season.

Before conference play even began, Elon transformed from a five-senior starting lineup into a team whose rotation now includes six underclassmen (freshmen Chuck Hannah, Kris Wooten, Federico Poser, and Andy Pack, and sophomores Nathan Priddy and Simon Wright) and just three upperclassmen (Seibring, Santa Ana, and Eberhardt). After struggling through so much lineup erosion, Elon finished its non-conference schedule with a 36-point loss to UMKC. With conference play on the horizon, Coach Matt Matheny’s team still had no identity.

Matheny’s had a heckuva tough job to do this year. His team includes (probably) the greatest player in Elon’s Division I history (Tyler Seibring) and another senior (Steven Santa Ana) who’s equally worthy of praise for developing into the team’s emotional leader. Matheny has highlighted Santa Ana’s leadership throughout the season and has noted that by working hard to grow as a leader, he’s made tremendous strides in his on-court consistency and effort. But Matheny’s also had to coach an exceptionally young group that surrounds his key seniors. With such a mix of experience and youth, Matheny’s done his best to play the role of “Magic Bullet”, never knowing what bright spots or challenges he may need to blend together during any given practice or game.

And while it’s certainly been a challenging season (this is a pro-Elon blog post, but the reality is that the Phoenix finished the regular season at a not-very-good 11-20), Matheny asserts that there’s still been plenty of fun to be had while coaching this team through its identity crisis. Elon’s lost a lot of games this year, but Matheny has rarely seemed frustrated or dejected. Instead, the constant affirmation has been that this team is “close” and that all that matters is how Elon plays during the conference tournament. Even as early as December, Matheny was quick to look ahead to the conference tournament. How can you build the momentum you need to be at your best during the CAA Tournament if you’re (seemingly) dismissing the idea that you should use the regular season to make progress on the little things that have plagued you?

And yet, here we are

Under Matheny’s leadership, Elon’s kept on chugging along. While the Phoenix certainly hasn’t set the world on fire (which, theoretically, is something a Phoenix would be capable of), Elon has gone 6-6 in the CAA since its 1-5 start. As mentioned above, that includes the recent 3-1 stretch which closed out the regular season. Is it possible that Elon is peaking at the right time, just as Matheny hoped?

The three seniors have been key during the recent positive stretch. Santa Ana has been an unstoppable force. Well… unstoppable except by the flu, which forced him out of the majority of the College of Charleston game on his Senior Night (Elon’s lone loss during the recent four-game stretch). He nearly averaged a triple-double over the final week of the season, good enough to earn him a “National Player of the Week” nod from one publication. Tyler Seibring keeps on being Tyler Seibring (he good). Plus, Sheldon Eberhardt has come on strong, playing extremely well in his “sixth man” role, where he often ends up playing more minutes than Elon’s starting point guard, Nathan Priddy.

More importantly, the three seniors have – slowly but surely – figured out how to work with the underclassmen to help them better understand the team’s collective identity. This team’s identity was never going to be “regular season contender,” but hey, if the team is hot at the right time – and maybe gets a bit lucky during the CAA Tournament – anything could happen, right? Last year’s edition of the Phoenix was expected to contend, then finished the season with seven consecutive losses. So why can’t this year’s team (and its low expectations) figure out a way to finish on a hot streak? Wait… don’t answer that, actually. I probably won’t like your answer.

Here’s the big question: Is there any evidence to show Elon can continue its hot streak during the CAA Tournament? Previously this season, Elon followed a 3-1 stretch with a four-game losing streak, including a 41-point loss at Hofstra (the eventual regular-season league champion). There’s no denying that Elon – with its blend of youth and experience – has been remarkably inconsistent this season. Hell, Elon’s even been inconsistent in the way its inconsistency shows up from game to game (or even timeout to timeout). It’s tough to feel “settled in” to an Elon game knowing the infamous #ElonLull might arrive at any moment.

Looking at who Elon has played during this 3-1 stretch doesn’t help build the Phoenix’s case for confidence. Elon’s three wins came against the three teams that finished below them in the CAA standings. When you take away games against JMU, Towson, and UNCW, Elon is a combined 2-12 against the rest of the CAA (wins at William & Mary and vs. Delaware).

Another factor at play: There’s not a single player on Elon’s roster who has ever won a CAA Tournament game. Elon begins this year’s Tournament against last-place UNCW, a team its already beaten twice this season. But is that enough to justify any confidence that Elon can show up and win a CAA Tournament game? Is Elon’s recent hot stretch a sign that it’s found a repeatable winning formula? Or is the CAA Tournament just another opportunity for Elon to strengthen its “brand” of inconsistency?

The optimist in me believes there’s a version of Elon that can make noise in this CAA Tournament. Let’s take a moment to try to envision the path to a CAA Championship. Saturday: Beat a very beatable team (10-seed UNCW). Sunday: Finish stronger against a team that you’ve already taken to OT twice this year (2-seed Northeastern). Monday: probably up against 3-seed College of Charleston, which is a historically bad matchup, but hey… this is an optimism exercise, so just win, baby! Tuesday: Get a little bit lucky, beat 1-seed Hofstra, and go dancing (it’s the championship game… anything could happen!).

It’s all very unlikely, but crazier things have happened in the CAA; even this season. Hofstra finished CAA play with a 15-3 record, but two of the three losses came against 8-seed James Madison and 10-seed UNCW. We know any team can win any game in the CAA, but who can do it the most consistently during the Tournament?

Keys for Elon CAA Tournament success:
• Defense needs to be good enough to give Elon a chance
• The three key seniors all need to be great
• All four freshmen need to bring something positive
• Nathan Priddy needs to make some tough shots and value the basketball
• Avoid the #ElonLull

If Elon can do all of the above – plus get wildly lucky – it’s got a shot to go dancing. Here’s hoping. Go Phoenix.