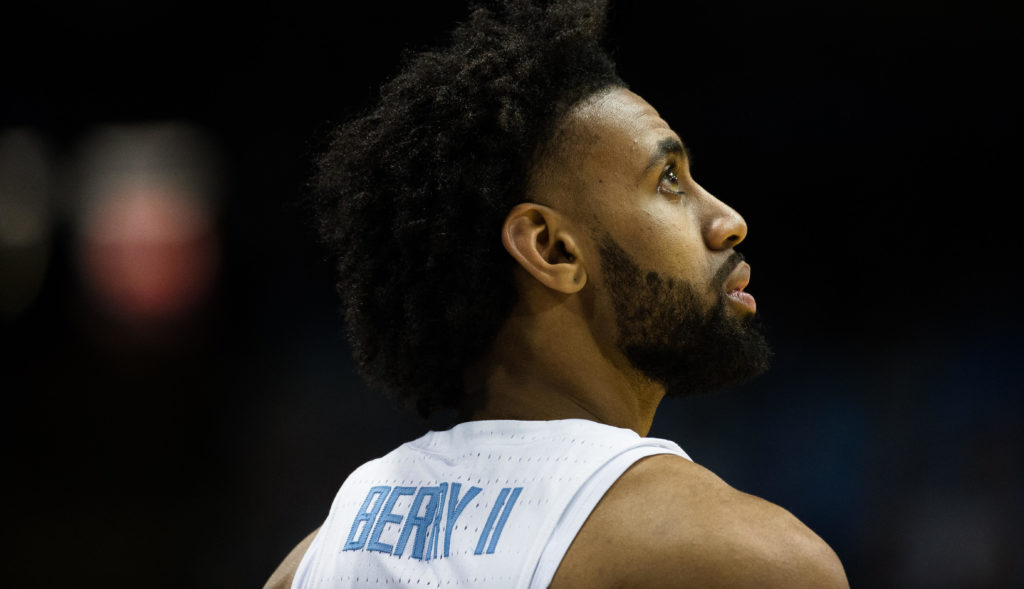 CHAPEL HILL – This was far from the storybook senior night that No. 9 North Carolina expected or that Joel Berry II and Theo Pinson could have ever envisioned. Down 16 to unranked Miami in the second half?

Berry tried mightily to ignite a plot twist with three big 3-pointers in the last five minutes on his way to a season-high 31-point night, including a tying shot with 4.1 seconds left. But the Hurricanes’ Ja’Quan Newton hit nearly a half-court shot at the buzzer to give them a 91–88 victory Tuesday night at the Smith Center.

With too many missed free throws by UNC and a lot of makes by Miami, the worst free-throw shooting team in the ACC (66.3% for the season before Tuesday and 92.3% against UNC), the Tar Heels couldn’t make it all the way back after trailing for the last 33.5 minutes of the game.

Miami’s 54.8% shooting was the highest by a UNC opponent this season. It is the third consecutive Carolina loss in which the opponent has shot better than 50 percent. After giving up 18 points off turnovers in the previous three games, the Hurricanes had 20.

A lot of emotions packed into five days for Berry

Five days after Berry went through all the emotions of proposing marriage to his longtime girlfriend, dance-team member Kelsey Porter, senior night brought more emotions he no doubt wasn’t anticipating.

After his 3-pointer tied it (much like Marcus Paige tied the NCAA final against Villanova), Newton’s shot — reminiscent of the buzzer-beater by Villanova’s Chris Jenkins — gave him heartbreak. This was the first buzzer-beating 3 to beat the Tar Heels since that game.

“For some reason, I don’t know why, people love hitting game-winners like that against us,” Berry told the crowd as he started his senior night speech.

He said that the sequence reminded him a lot of the Villanova game but the buzzer-beater didn’t.

“This was one of those plays that you can’t necessarily do anything about,” said Berry, who hit a season-high-tying five 3-pointers. “The Villanova shot was like NBA range, it was a good shot. But this one was a heave and just so happened to go in, and I backed up because I didn’t want to foul. I knew they were in the one-and-one. He took the shot that we wanted him to take, it just went in. He just stepped up and hit a big shot.”

Berry badly wanted to win his senior night game, but he said the heartbreak doesn’t compare to that frustrating 2016 night in Houston.

“It’s not as bad,” Berry said. “It doesn’t compare to that. National championship game and this game are on two totally different levels. The great thing about this one is we have a chance to come back and play again. We have a chance to redeem ourselves.”

Pinson at times seemed to be a little too eager to make the perfect pass and was overpassing some in the first half. But he showed Tuesday why he is one of the best play-makers to wear a UNC uniform.

“I had zero time to sit back and watch,” Pinson said. “Zero time to just sit there and wait and see what happens. I wanted to be aggressive and attack as much as I could and if I feel like I had a play to make, I tried to make it. It was just one of those times. I just tried to do everything I could.”

It was a quintessential Pinson game in some ways as he collected a career-high 11 assists, the first Tar Heel with double-digit assists since Berry had 10 in the 2016 national-semifinal victory over Syracuse. In other ways it wasn’t, as he made multiple 3-pointers in consecutive games for the first time in his career. He made 3-pointers in three consecutive games for only the third time in his career.

“This one is tough. I wanted this one really bad,” Pinson, who scored 12 points, told the crowd in his tearful speech. It was his first career double-double with assists as one of the two elements and the first by a UNC player since Paige did it against Georgia Tech on Feb. 21, 2015.

There was a lot of blame to go around for UNC falling behind in the first half, but a lot of that went to guard Seventh Woods. He wasn’t smooth on offense and the Tar Heels struggled when he was giving Berry a rest.

It was no wonder that, despite Berry picking up his third foul early in the second half, Woods never returned to the game after halftime.

Fans got the idea when they showed video of Berry flexing his muscles on several occasions in the dressing room and his teammates marveling over it.

The fans picked up on it and a few fans shown on the arena screens did their best flexing. Without help from UNC strength coach Jonas Sahratian, they didn’t have quite the same flair.

Two of the starters for Carolina against Miami — Kane Ma and Aaron Rohlman — have the distinction of combining to miss only one shot all season.

Of course, that’s mostly because the seniors only got garbage-time minutes until starting against the Hurricanes. Rohlman, who has been on the varsity for two seasons, has made both of his shots in 26 minutes and Ma is 1 for 2 in nine minutes since being promoted to the varsity just before Christmas.

Fans both love and feel nervous about the tradition, particularly when the senior-night opponent is Duke. Against Miami, though, UNC led 4-0 when they came out a little less than two minutes into the game. Neither took a shot.

In addition to the normal hype of a UNC-Duke game, and the added attention of yet another visit by ESPN’s College GameDay, the coveted No. 2 seed in next week’s ACC Tournament in Brooklyn will be go to Carolina with a win. With that will be the assurance that there can’t be a matchup with No. 1 seed Virginia until the championship game. Sweeping ramifications for the Tar Heels.