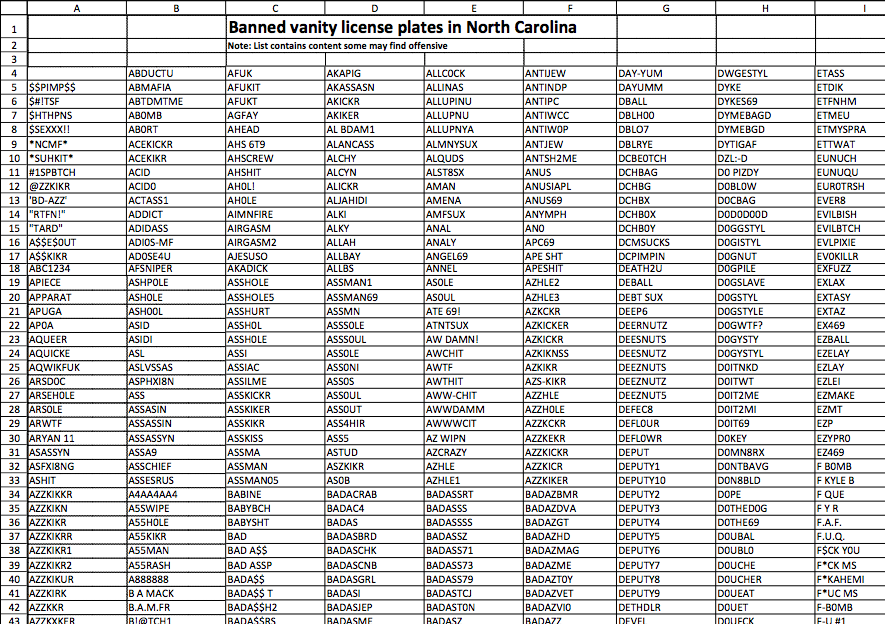 I’m not sure how I came across this list of 6,000+ banned North Carolina license plates that was analyzed by the Charlotte Observer two years ago. Like everything else I read, it probably came across my twitter feed when I was bored or on the toilet. But a question crossed my mind as I perused one of the 18 pages of clever combinations of eight or fewer letters and numbers: how many banned plates deal with sports teams? I was especially curious about North Carolina’s sports teams, particularly the college rivalries that for so long defined the state’s sports culture.

Sports aside, there were some definite trends among the banned plates. As acceptable a joke as it has become, any form of ’69’ is unacceptable for NC’s roads, including IB6UB9, SUMMR69, and MONGO69. Likewise anything with ‘Pimp’ in it–a very popular rejection that included PIMPJUCE, PIMPTOWN and PIMPHRD. Not surprisingly, 69 PIMP made the list.

There are many different versions of M@SSHOL3 and MUFFDIVR, two points of pride for certain people, apparently. Not surprisingly, every variation of DEEZNTZ has been blacklisted. If you hate the animal rights group PETA, better broadcast it on a bumper sticker because there are about 20 versions of PETASUX on the banned list. Actually, anything with ‘SUX’ on it is not making it through, curiously not even SATANSUX (though the state won’t let you bash the devil like that, you can’t claim to be him, either: LUCIFER, SATAN and IAMSATAN are all off the table)

There were a few I had to question as to why they were banned: CRABS (a delicious dish, and soft-shell crabs in NC are the best!), FNKYBASS (you’re trying too hard if you think that’s obscene), MUGGLE (not a Harry Potter guy, but doesn’t this just mean ‘non-wizard’?) and TABASCO (maybe because it’s a brand?). And there were some I wasn’t sure their true meaning. If you wanted one of 21 banned forms of A$$KIKR/AZZKIKR on the list, is it because you want to beat people up? Or because you’re disappointed with the underwhelming state of your favorite team’s place kicker? Who knows?

But there original mission was to find team related banned plates. So without further ado, here’s what I found:

DAMNCATS – sure, this could apply to a number of teams. We’ll just assume it’s Kentucky.

FUCLA – a long ways away for that much animosity towards the Bruins but I get it.

WEH8WCC – someone is NOT a fan of the West Coast Conference and thinks Gonzaga and St. Mary’s are always overrated.

HOOHATER, HOO4EVER, PH**KVA, WAHOO69 – a lot to unpack here. HOOHATER and HOO4EVER both seem a little benign to get banned. PH**KVA might not be directed at Virginia athletics, but we’re throwing it in there.

There were only 2 I spotted that could apply to Wake:

SUCKWAKE – this could mean a lot of things, but we figured it was close enough to be at least considered an anti-Wake Forest plate.

ABTDMTME – again, it’s open to interpretation, but I could definitely see a proud Wake Forest fan, after finally watching his teams return to a bowl game and the NCAA Tournament, rush off to grab this one

State had a few more plates dedicated to them, though again their meaning is vague

HATESTAT – probably someone who hates the Wolfpack. Then again, could be someone who really does not like their Statistics class.

HATEST8 – this seems a little more clear cut: if you’re trying to get this license plate in North Carolina, it probably indicates you cheer against the Wolfpack

NCSU69ME – is this an insult, the way that ordering an opponent to perform a sex act on you would be? Or is this a pro-State plate? Tough to say.

As you may have guessed, UNC and Duke got the most “love” on the banned plate list. But UNC was a distant second

HATEUNC – commanding others to join in the hate

IH8HEELS – owning the hate, but proclaiming it to the world

UNCSUCKS – of course, if you can fit the whole word on there, why not try?

UNCSUCS – hoping the DMV wouldn’t catch what you were trying to do?

Congratulations, Blue Devils! No one has more banned NC plates dedicated to them.

DOOKIE/DUUKEEY – to be fair, this one could be a Duke alumnus owning the ‘Dookie’ nickname

DOOKSUKS/DOOKSUX/DOOKSUXX/DUKESUCS/DUKESUX – probably not a Duke alumnus

EF DUKE/F DUKE – may have not been happy with the customer service at Duke Energy?

FKU DUKE – the fact that the personalize it with a “U” means maybe they know someone named Duke.

GTH DUKE – does every team tell the other to “go to hell” in some song or another?

There you have it. I can’t believe I wasted that much time poring over license plates. But you know what? I would have KCKEDA$$ at that game show Bumper Stumpers.