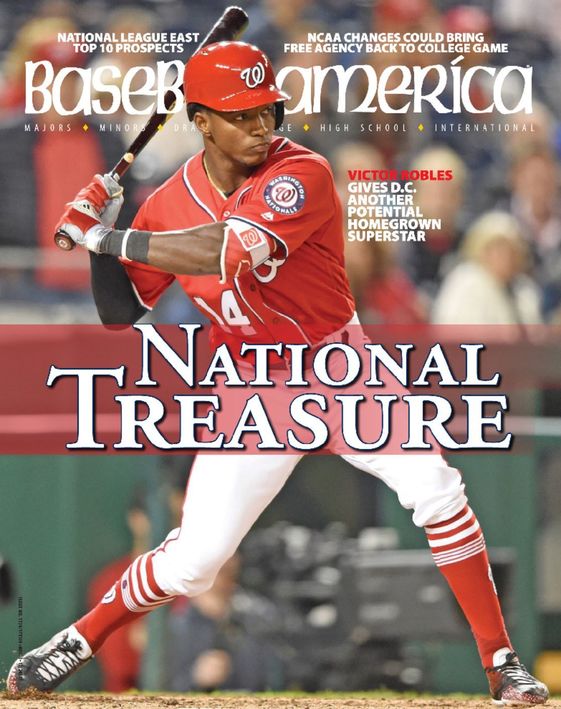 Editor’s note: SportsChannel8 would like to welcome new contributor R.L. Bynum. R.L. will write regularly about media topics of interest to sports fans of NC. He’ll also contribute to our coverage of UNC hoops. And if I know him well, he’ll probably write some stuff about running (he’s closing in on 50 career marathons). R.L. spent 27 years as a newspaper copy editor and has been a sportswriter as well. If you have tips or suggestions, hit him on twitter @RL_Bynum.

After many changes, Baseball America under new leadership, ownership

When the Great Recession accelerated tough times in the newspaper industry, Baseball America, thanks in part to its books, largely escaped layoffs or upheaval.

But when Alliance Baseball LLC purchased the Durham-based national publication Feb. 13 from TEN: The Enthusiast Network, it marked the second ownership change in six years. Since then, according to former BA staffers, nine employees departed, some via layoffs. One employee has joined BA and left since the ownership change.

One person who worked in customer service and shipping for 30 years lost his job, according to a source, and BA lost two longtime staffers who were at the top of its masthead.

On Nov. 1, former editor-in-chief John Manuel became a scout in the Carolinas for the Minnesota Twins. On Nov. 2, former publisher Will Lingo made public that he was no longer at BA, although he hadn’t been in the office for months and, before then, had a reduced role.

B.J. Schecter, a former editor at Sports Illustrated who spent 20 years there, became BA’s editor and publisher in late May. J.J. Cooper (formerly managing editor) and Matt Eddy were promoted to co-executive editors.

Only two of the six departures since Schecter joined the magazine were voluntary. He has hired four people during that time, and estimates the staff is between 20 and 25. They are in the process of adding a copy editor.

He rejects any suggestion that things aren’t going well at Baseball America.

“I think sometimes perception isn’t reality and I can understand that,” said Schecter, who works between Philadelphia and New York. “You see a new ownership group and you see people leaving and you think the sky is falling. Your knee-jerk reaction is like, ‘what’s going on there. I wonder what’s going on.’

“In reality, I think, in time as we reshape this business, we’re going to be stronger than ever,” he said. “Even from the inside, it looks like the sky could be falling. But I have great confidence in the organization and the business is strong or else I wouldn’t be here.”

Schecter estimates that he went through more than a dozen rounds of layoffs at SI, so he understands that change isn’t easy.

“I know it’s hard, especially for a smaller close-knit organization,” he said.

The common pattern at daily newspapers is to reduce staff while cutting the news hole and beats. Management often seems to make decisions with more attention to the bottom line than the product. Schecter said that this has not been his mission.

“I didn’t come to slash and burn and just kind of make ends meet with fewer people,” he said. “There are certain things that we have to do. I understand the realities of the business. But I came here to grow the business because I believe in the opportunity and that the ownership group was going to give me the tools that I needed.”

He said that the owners have given him everything he’s asked, within reason, but that BA hasn’t made any money in at least 10 years and that has to change.

“My first goal is that we have to make money,” Schecter said. “But just as important to me is the product. The product has to be something that we’re all proud of, that I believe in. And I have extremely high standards.”

Alliance, founded in 2009, owns and operates the Triple-A Omaha Storm Chasers and the Double-A Richmond Flying Squirrels. Gary Green, the CEO of Alliance Baseball LLC and Alliance Building Services, is part of an ownership group that purchased the Double-A Montgomery Biscuits (the team below the Durham Bulls in the Tampa Bay Rays minor-league system) the same month BA was acquired, although it wasn’t approved until May.

The magazine lost quite a bit of institutional knowledge since Lingo had been with BA since 1994 —the year of the Major League Baseball strike — and Manuel since 1996.

“It’s sad for us that the place we worked for so long and loved working for and built up, that we had to leave,” said Lingo, who started as an assistant editor and ascended to publisher, a position he held for most of the last three years.

He’s not sure what’s next for him.

It’s not the first time that BA dealt with big losses, such as when Jim Callis left for MLB.com or when founder Allan Simpson — a member of the Canadian Baseball Hall of Fame — departed for Perfect Game USA.

Many have left the magazine for baseball careers. Both World Series teams had BA alums: Alan Matthews is a crosschecker for the Los Angeles Dodgers and Kevin Goldstein is a special assistant to the general manager for the Houston Astros.

“The list goes on of trusted writers who BA has lost over the years,” Schecter said. “But one thing I think that BA has done very well is their ability to restock. I think the farm system is still really strong.”

Carlos Collazo, a recent UNC graduate, joined BA in March and Schecter said that he had a talented group of summer interns who could potentially work full time after college.

“I’ll be bringing on, through my network, some high-profile writers that will be contributors to us and not any of them that I can announce right now,” Schecter said. “But we are going to be adding to our stable of writers.”

Although Ben Badler, BA’s international writer, works out of Boston and a couple of digital staffers don’t work in North Carolina, most of the staff is in Durham.

“There are very few people who can do what Baseball America can do,” Schecter said. “We’re going to double down on what is the mission of Baseball America: identifying the future stars of tomorrow today.”

A lot has transpired since Simpson started the magazine — initially calling it the All-America Baseball News — in 1981 from the garage of his Canadian home just north of Seattle. Miles Wolff, the longtime owner of the Durham Bulls during the franchise’s Class A era, bought the magazine in 1982 and relocated it to Durham. He owned the magazine until 2000.

Baseball America’s print edition comes out 24 times a year, with a double issue at the end of the year, in addition to a digital presence. Schecter says that the publication schedule won’t change and that he is looking to add a couple of special issues.

BA didn’t have a website until 1999 but went against the norm at the time by putting up a paywall in 2001. BA has weathered a lot of digital baseball competition from outlets such as Baseball Prospectus, Fangraphs and ESPN.com.

Schecter said a condition to him joining BA was that the magazine improve on the digital side, and that he got that commitment. He brought in a web developer and expects to launch a new BA website in February.

“Our website right now, quite frankly, is not very good,” said Schecter, who worked on the digital side at SI. “I think we do the best with what tools we have but I think the website that we’re building — both paywall and nonpaywall — is going to be far superior in every way. There’s going to be plenty of stuff in free space like it is now.”

Like most media outlets, he hopes to reach the coveted younger demographic.

Until late last month, subscribers to The McClatchy Company newspapers had to go to a separate link to view the Sports Extra pages. Those are agate pages, usually between two and four of them, that feature complete standings, box scores and summaries for all games (although there never are NHL summaries), even West Coast games.

Now, the pages have been rebranded as “Sports Stats” and are inserted in McClatchy newspaper e-editions at the end of each sports section. E-editions are replicas of print editions, and The N&O and Herald-Sun never have night results in the next day’s print editions because of early-evening deadlines.

Hopefully, the first weekend of the college basketball season isn’t an indication of how those pages will treat that sport this season. They only included scores and schedules but no box scores until the Top 25 boxes appeared in Monday’s six-page edition.

Former Davidson star Stephen Curry, in The Players’ Tribune, wrote on Veterans Day about the platform he has, the national anthem protests and the military.

Lindsay Crouse of The New York Times wrote about “The Shalane Flanagan Effect” in the wake of the UNC alum’s New York City Marathon victory. She explains that it’s a case study in extraordinary female leadership.

Wolfpack transfer Braxton Beverly, in a personal blog post, stated the case for eligibility in telling his emotional story.

The N&O’s Luke DeCock wrote a nice feature on Ron Cherry, who had his ACC football officiating career end early because of injury.

Reid Forgrave, on cbssports.com, points out that UNC’s Theo Pinson is the only top 15 2014 recruit still in college.

There were some good tributes to former N&O and WRAL.com columnist Caulton Tudor in The N&O from DeCock and Joe Giglio and on this website from Hayes Permar.

Madison Taylor, the former editor of the Times-News in Burlington, wrote that it’s an oversight that, unlike Tudor, the late Bill Hunter — the legendary former Times-News sports editor — is not in the North Carolina Sports Hall of Fame.