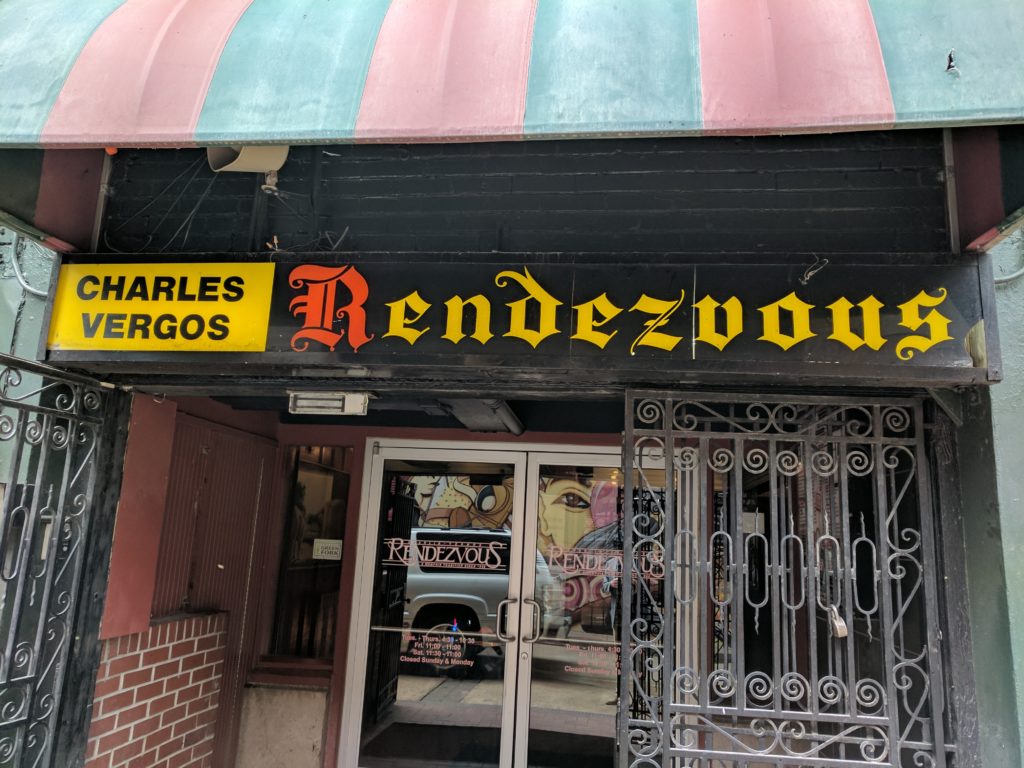 You get the sense that if Roy Williams and John Vergos had more time to spend together they’d be REALLY good friends. They both have a timbre and tenor that indicates where they’re from–Vergos’ family came from Greece, but he is a Memphis original; Williams famously dadgums through a Western NC drawl. They are both entrusted with running an iconic institution–for Roy, UNC basketball, for Vergos, the Rendezvous restaurant–that they inherited from men they greatly admire (technically it’s still ‘Charlie Vergos’ Rendezvous’ and if he could Roy would probably still call them ‘Dean Smith’s UNC Tar Heels’). They both preach the importance of people (for Roy, players, for John, his staff) and building a “family” of folks who are dedicated to continuing the legacies.

But with Williams busy coaching his  team towards another Final Four and Vergos running arguably the most popular rib joint in Memphis, for now they’ll just have to settle for a mutual respect and a shared meal while the Tar Heels are in town once again. 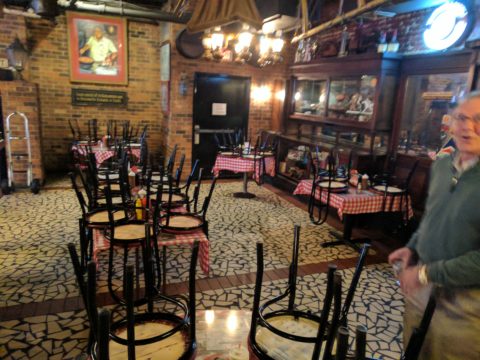 “Roy Williams has been coming down here since he coached at Kansas,” Vergos told me as we chatted before the dinner rush started on Wednesday. “He came down to recruit Penny Hardaway. He’s been a customer for a long time.”

It’s hard to discern exactly what Vergos means when he talks about coming “down”; by food and feel Memphis is clearly a southern town you would “come on down, y’all” to. But since Rendezvous’s dining room is located below ground, you literally “head down” the stairs to eat as well.

Which is exactly what Williams did once again when he showed up at the restaurant’s nondescript alley between 2nd Street and B.B. King Boulevard in 2005.

“When he won his first national championship the game was on a Monday,” Vergos recalled. “On Wednesday I look up and I see him coming down the steps and I say, “Coach, what are you doing down here? You won the National Championship–you’re the hottest thing in town. He said ‘I’m recruiting.’”

Again, you get the sense that if John Vergos were a basketball coach, he’d be recruiting two days after a national championship.

Vergos won’t say who he’s pulling for in this weekend’s South Regional in Memphis. With Butler, UCLA and UNC all planning meals for their squads at Rendezvous, it’s probably bad business to have a favorite. But poke around the various rooms in the restaurant and you’ll find more UNC memorabilia among the many knick-knacks and southern trinkets (the same decore you’d find in an NC BBQ shack) than you will 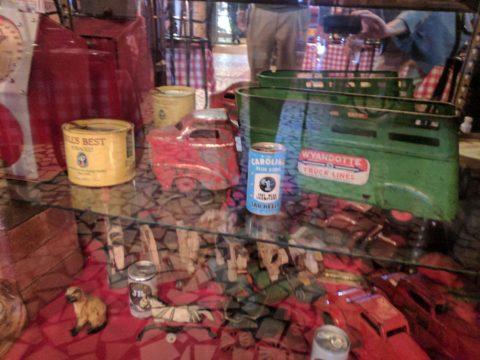 A commemorative 1982 Carolina Blue soda can at Rendezvous

other schools not hailing from Memphis. On top of a glass display cabinet sits a special edition 1982 National Championship Carolina Blue Soda can. Not far away are pictures of Williams posing with Rendezvous staff. One room over, displayed above a doorway, is a signed 1982 UNC roster poster. Looking at a young Michael Jordan and James Worthy, Vergos remarks, “I always figured if things went bad with the restaurant, we could sell that for some money.”

But what about the one team that ISN’T scheduled to eat at Rendezvous this week: Kentucky? Their head coach, John Calipari, is no stranger to Memphis (where he coached prior to Kentucky, leaving some fans upset with the way he moved from one job to the next). Nor is he a stranger to the Rendezvous.

“We had a good relationship,” Vergos says of Calipari. “I had my deal with Coach Cal–he would always send people down here and I’d say ‘Coach, is this one retail, wholesale or comp?’ Sometimes he’d say ‘charge them full price’ or sometimes ‘can you give them a deal?’ He was very involved in kids’ charities, sometimes if it was for charity he’d say ‘I’ll split it with you.’

As for Calipari’s relationship with the rest of Memphis, that’s yet to be determined. Most Uber drivers will tell you the town hasn’t forgotten. Some will even conjure up a Calipari quote about staying at Memphis that in their minds justifies holding a grudge. Vergos speaks more rationally–remembering what Calipari did to invigorate the Memphis program and understanding that business is business. He also recalls one of his favorite memories of running the restaurant: 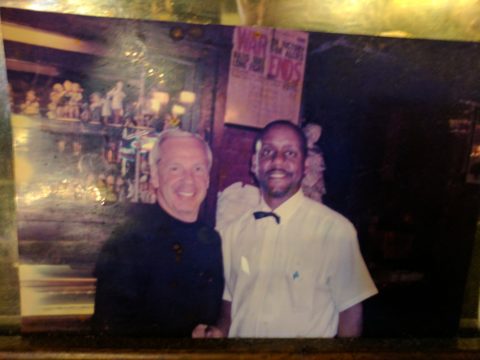 Roy with a member of the Rendezvous staff, some of whom have worked there for over 40 years

“Maybe the most fun I had working down here was when Memphis played Cincinnati in the early 2000s when they were both in the conference. They played one night and Bob Huggins [Cincy’s coach at the time] beat us by a couple of points on a last second shot. Cal had his priest with him and told Huggins–he called him Bobby–to meet him down here, and they bullshitted for a couple hours until 1 or 2 in the morning, just them and a few friends and our guys who hung out to serve them.”

But Vergos also knows Memphis people and that not everyone has let go of the animosity.

“Memphis is a little bit like Philadelphia–they boo a lot of people,” he said. “I suspect they’ll be a smattering of boos but also a smattering of cheers. I think as time has gone on people appreciate what he did. But there will always be people a little hacked off about it.”

Vergos’ respect for Calipari seems genuine–and he wouldn’t be surprised if he gets a call from Cal this week, if not to reserve a table then to at least request another “retail, wholesale, or comp” deal for a friend.

But ultimately, if Vergos were to become best buds with one of the visiting basketball coaches, it would be Williams. Roy acknowledged the mutual affection when, after Memphis radio host Gary Parrish listed his accolades as introduction to an interview this week, his first response was, “Gary, all that stuff I listened to but the most important thing is I’ll be eating ribs at Rendezvous Thursday night.”

(Roy Williams should be doing commercials for @Rendezvous_Ribs. Opened our conversation with a strong shoutout. https://t.co/qw9Ka2SduH)

The two men even brag the same way–very subtly. Both give of an air of being sheepish around a spotlight, but if you get them talking you remember people don’t become Hall of Fame coaches (as Williams is) or Memphis City Council members (as Vergos was for 8 years) without some feeling that they have the right mind for leadership. Both will deflect praise to their players or staff and talk passionately about how much the “family” feel is important to them (Vergos demonstrates this best when he’s greeting passing staff by name and asking them how their vacation was). Of course, it’s up to you to connect the dots that Williams and Vergos are the ones who brought in such great people and helped foster such an environment.

When it comes to competition, both men seem to embody the words of Aunt Eller from ‘Oklahoma!’: “I won’t say I’m no better than anybody else, but I’ll be danged if I ain’t just as good.”

Vergos echoes this sentiment when we finally get around to talking BBQ. He sighs a bit, knowing he’s about to be asked “Who does it better: Memphis, NC or somewhere else?”

And much like Roy answering a question about his deep rotations, defending the three, or (not) calling time-out, Vergos seems to have an answer he has practiced many times and is comfortable with.

“Can I tell you something about BBQ? Don’t get philosophical,” Vergos requests. “There are three things 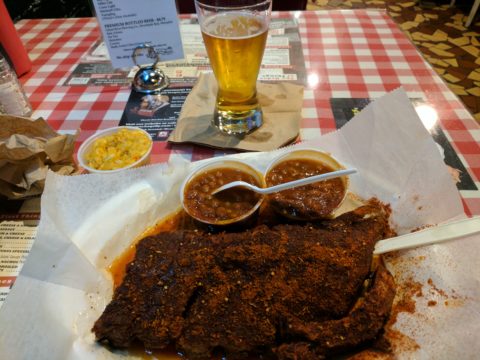 about BBQ: number one it tastes really good. Number two it’s truly southern, truly American. And number three, it never goes out of style. If you do it Carolina style and you sauce it up differently than we do, it’s still good. If you do it Texas style and you have brisket and put sauce on it, it’s still good….although I hate to give props to Texas because they’re so arrogant about everything.”

And after a BBQ peace-making answer that boils down to “we do it how we do it” (same as Roy’s coaching decisions based on a system that has worked well for years), Vergos does go on to admit why he thinks the Rendezvous stands out. Notice how he is both deferent and prideful, giving an answer Ol’ Roy would be proud of:

“People around Memphis will say ‘you have the best ribs’ but I say there’s good BBQ all over Memphis, because I eat it all over Memphis. But if you came to Memphis and only had one place to eat, I think you should come to the Rendezvous. It’s our family’s business. We don’t franchise. We have staff that’s been here over 40 years. We’re proud of it.”
On Thursday, Roy and the Tar Heels will be back to visit the Rendezvous and eat ribs. On Friday they’ll play for a chance to advance to the Elite Eight. Win or lose, Williams will probably be back on the road recruiting in a few days, and he and Vergos will both be hoping he has a reason to rendezvous back in Memphis soon.