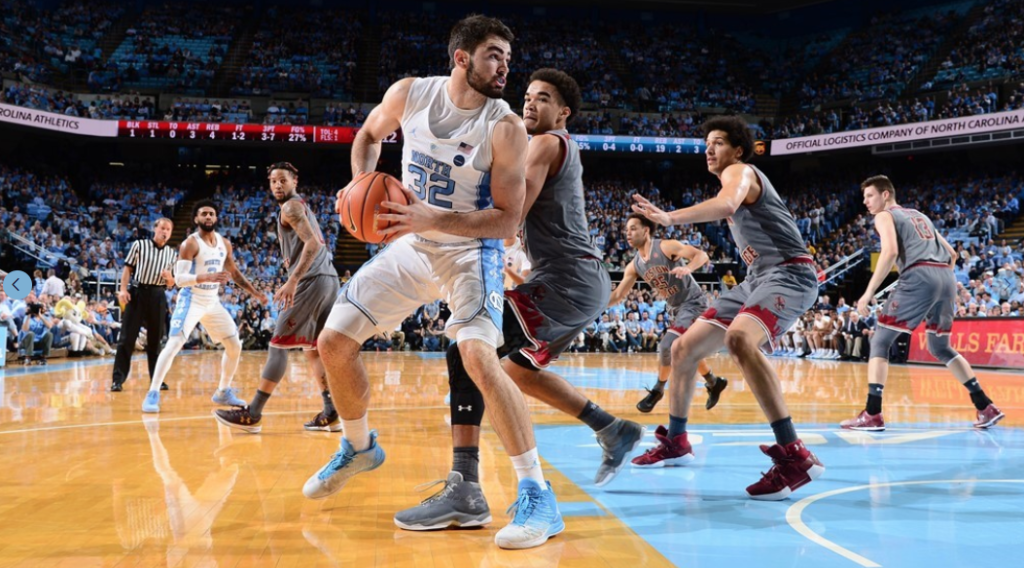 8 Things about UNC’s win at home over Boston College

CHAPEL HILL — Consecutive ACC road losses against tough, ranked teams may have had some North Carolina fans wondering if it was time to panic. And Coach Roy Williams said he had to make sure the players didn’t think “the Titanic was going under.”

But the now No. 20 Tar Heels showed in a convincing 96-66 victory Tuesday over Boston College that there was no reason to worry, and that this team is capable of doing some damage in March.

Time to start out small

It was the perfect game to start the “Death Lineup” with Luke Maye at the five, along with Cameron Johnson, Theo Pinson, Kenny Williams and Joel Berry. While Boston College’s center Nik Popovic is 6-11, the bulk of the Eagles scoring comes from 6-7 Jerome Robinson (15 points), 6-1 Ty Bowman (21) and 6-5 Jordan Chatman (11).

Johnson started (in place of Williams) in UNC’s only public exhibition before getting hurt. But on Tuesday, he was in the lineup instead of Garrison Brooks, who had started every previous game.

Why did Coach Roy Williams make the move? His explanation was simple.

“We got beat twice in a row and we weren’t playing well, so I had to do something,” he said. “Going small was also better for our matchups. It was a good team to go small against.”

The move also made sense considering how little inside production (and interior defense) the Tar Heels had been getting from their freshman big men. In 27 minutes Tuesday, Brooks and Sterling Manley combined for 13 points and nine rebounds.

Johnson responded well to his first start, getting a follow-up dunk for the game’s first points and six rebounds in the first six minutes.

“It just kind of opened our eyes to the fact that they left a couple of gaps for us to shoot and rebound,” Johnson said of the tone that dunk set. “I know their guys play heavy minutes, so as long as we just attacked them at every second, it would have a positive impact.”

Johnson tied his career high with 11 rebounds, pulled down last season for Pittsburgh against Virginia Tech.

Rebounding clearly wasn’t a problem all night since UNC put up season highs with 58 rebounds, 23 offensive rebounds and a 35-rebound margin. As Roy Williams preaches, if UNC plays small, they’d better rebound or the Tar Heels will stop going small.

“We did our best to rebound,” Johnson said. “Obviously with the small lineup it’s an emphasis. If we are going to play this lineup we have to rebound and we have to defend. Everybody contributed on the glass.”

Johnson showed his versatility with a pair of dribble-drive 3-point plays in the second half on a night that his 3-point shot wasn’t falling. He scored many different ways on his way to 14 points and also dished out five assists.

“It was just what was opening and I was taking what the defense was giving me,” said Johnson, admitting that his struggles in the last two games may have had something to do with him driving more aggressively. “A couple of curls were just open. Just moving the ball around trying to get the defense to shift. That’s the best way to break them down. We had been working on that in practice.”

So he Maye be fine, after all?

Some fans may have been shaking their heads at Maye’s performances in recent games. Simple tasks like catching the ball inside and shooting close shots seemed to be a challenge.

There were few challenges for him against Boston College. The five spot seemed to agree with him, as he scored six points in the first four minutes before yielding that position to Brooks. He had more points (21) by halftime than he had combined in losses to Florida State and Virginia (20).

“It’s a lot of fun when you shoot it and the ball goes in a little more,” Maye said. “I haven’t played well at all the past two games and I felt like I had to step up for my team.”

“I shot one from pretty deep and if I missed I probably would have come out, that’s for sure,” said Maye, who tied his career-high with four 3-pointers. “Definitely felt like every shot I shot, I thought was going in. And when you feel like that, it makes the game so much more fun.”

With the small lineup opening things up inside, it seemed to be to Maye’s liking. He gave up three inches to Popovic but consistently had the better of that matchup, thanks to his quickness.

Maye liked how his game flowed while he played at the five.

“I think it spaces things out and makes me focus more on rebounding and getting in the paint,” Maye said. “But I feel like we’re starting to play better together and play with a lot more continuity with the offense and it’s really helping us out.”

Coach Williams compared Maye’s game of late to sportswriter Barry Jacobs. But he also suggested Maye could have been listening to the doubters and shouldn’t have been.

“I’ve got really good kids. They care what people think,” Coach Williams said. “I tell them to shut up and play. I told Luke, ‘you don’t have to be anybody else. Just Luke.’ … He came back into Luke. I like Luke a lot better than I like Barry.”

Rediscovering the inside game

Even with the smaller lineup used extensively Tuesday, Carolina found the inside game that was lacking in the losses at Florida State and Virginia. The Tar Heels’ total of 48 inside points was equal to their combined total in those two defeats.

Will TV Teddy be back calling UNC games?

Since the social media dustup after longtime official Ted Valentine turning his back on Joel Berry during UNC’s loss a Florida State, more information has trickled out. That includes his “it’s all about me” explanation of the controversy in an interview with The Fieldhouse’s Seth Davis in which he said that he was considering retirement.

Valentine worked the Syracuse at Virginia game, his first action since Thursday’s Arkansas-Little Rock at Georgia State game. He had the Duke at N.C. State assignment taken away and declined the chance to officiate Georgia Tech’s home game against Yale. The Big Ten also took him off two assigned games last weekend.

Valentine did have a conversation with Berry after he faced the FSU dance team for a few seconds instead of the court. But, as Coach Roy Williams related during his radio show this week, that was because Williams told Berry to apologize to Valentine for placing the ball down on the court. He saw that but not Valentine’s stunt.

“You go apologize for setting the ball down, because that’s not what you do,” were Williams’ instructions to Berry, which the coach related on the show.

Williams thought it was neat that Berry proceeded to do what his coach asked and didn’t mention anything about Valentine’s actions.

It will be interesting to see if Valentine isn’t assigned any more UNC games this season, just as Karl Hess didn’t work any N.C. State game for a while after ejecting two former Wolfpack stars.

What would have been a rough assignment, visiting Notre Dame and preseason ACC player of the year Bonzie Colson on Saturday, will be a bit easier than UNC expected when the schedule came out. That’s because Colson broke his left foot and is out for two months. In addition, guard Matt Ferrell’s status is unclear after he suffered a sprained left ankle.

Oh, and after that? Clemson, up to No. 19 in the AP poll, visits UNC on Tuesday seeking the Tigers’ elusive first victory in Chapel Hill after losing all 58 previous visits.