Clemson’s hopes that its long history of Chapel Hill futility would end was again futile Tuesday night, even on when the Tigers made 15 consecutive second-half shots. The No. 15 Tar Heels held off an incredible second-half shooting barrage for an 87-79 victory over No. 20 Clemson.

Who would have thought that Coach Roy Williams would ever go the first 13 minutes of a game without having two big men on the court at any one time?

For the third consecutive game, Luke Maye was the only big man who started. He came out in favor of Sterling Manley for three minutes at the 12:01 mark of the second half before Maye returned for Manley.

It wasn’t until 7:02 remained in the first half, when Garrison Brooks replaced Theo Pinson, that two UNC big men were on the court, and that lasted less than 2.5 minutes. And there were rarely two big men on the court in the second half, either.

When Maye left with a bloody face on his way to getting five stitches on his nose after colliding with Kenny Williams, Brandon Huffman played in the first half for the first time in a few games. 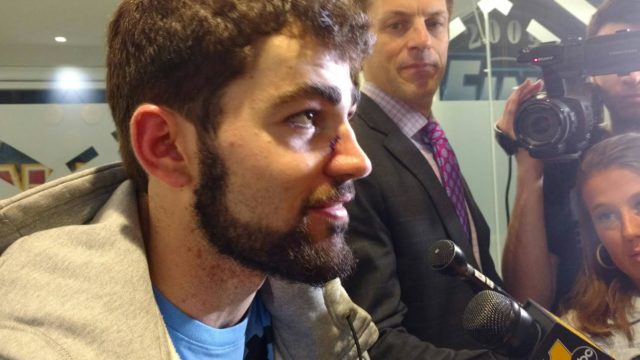 “Kenny’s elbow hit me in the first half,” Maye said. “I was going for a rebound and bled a little bit, but I feel great. Just a little stitches – five stitches. Doug [Halverson], our trainer and physician, checked me for a concussion and I felt great. No headaches.”

The bottom line was that the freshman big men got fewer opportunities. Manley played a season-low five minutes (he played seven against Wofford) and Garrison Brooks tied his season-low with 11 minutes (Bucknell).

Conversely, Joel Berry played a season-high 36 minutes  and Kenny Williams got a career-high 37 (previous high was 35). Berry played the entire second half until the walk-ons came played in the last minute as Jalek Felton got a season-low three minutes (previous low was five).

Coach Williams seems to be showing much more confidence in his experienced players than his still-raw freshmen.

Sensational with ball screens and penetration

The small lineup is more versatile, and one way the Tar Heels exploited that was with screening action. They took advantage when the Tigers were hedging hard by either attacking the basket or quickly passing to an open 3-point shooter. They also exploited the extra attention Clemson paid to Maye.

“Whenever they hedge like that, it makes it easier because — with a guy like Luke — he’s not rolling to the basket, he’s popping,” Berry, who scored 17 points and made five 3-pointers, said of Maye breaking free for a possible perimeter shot. “So, if they stay too long and we’re able to get good spacing, that’s a wide-open 3 for Luke.”

Carolina got lots of production with penetration and kick outs, paying off by making 15 3-pointers, including a career-high-tying six from Cam Johnson (who also made six for Pittsburgh against the Tar Heels last season). Johnson led UNC in scoring for the first time with 21 points.

“That’s what’s different about this team this year,” Berry said. “Whenever we go on a ball screen, it’s just not a big man rolling to the basket every time. So, when that guy hard-hedges, it’s hard for them to recover and if they have to go to Luke, that’s another pass to the corner for a wide-open three.”

Pinson, who collected 12 points, seven rebounds and six assists, says one of UNC’s strategies was to get Clemson’s big men out of the post on ball screens.

“But we tried to do it as quick as we could to run up to the screens, so we could get downhill and make a play,” Pinson, who had a career-high three blocks, said, adding that it’s easier when your five is a guy like Maye. “You’ve got to watch out for the pitch back for him for 3 or him just making a play off of that.”

So, you’re telling me there’s no chance? 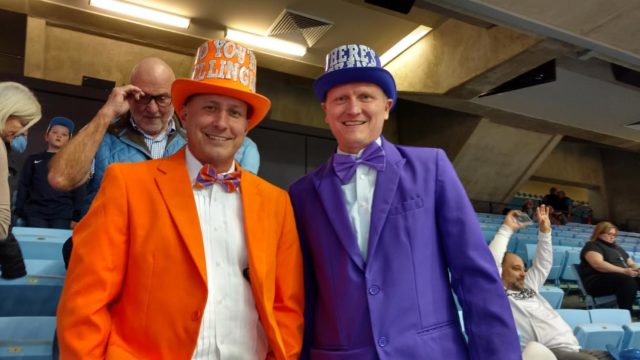 Two Charlotte residents who are Clemson graduates, Al Murray (Class of 96, left in photo) and Ellis Foster (Class of 98) have been coming to Chapel Hill for years, hoping to be there when their beloved Tigers finally beat North Carolina in Chapel Hill.

With Clemson ranked and off to one of its best starts in years, they figured they would go all out with “Dumb and Dumber” outfits. So, you’re telling me there’s a chance? Both felt that way coming into Tuesday’s game.

The good news is that the Tigers had better than a 1-in-a-million-chance. But the chances still weren’t good enough on this night.

“I’ve been here 10 out of the last 12 times we’ve played here and I keep coming back waiting to see the streak end,” Murray said. “I ask for two things every year for Clemson basketball: Beat that other team from South Carolina and, the years we come up here, beat North Carolina. Other than that, I really don’t care about the rest of our basketball season.”

Spoken exactly like a true fan of a football school.

He’s not happy that the expanded ACC has meant fewer chances to end the Tigers’ embarrassing history in Chapel Hill.

“Now that we don’t come here every year, it really stretched the streak out,” he said. “Now all you got to do is beat us once and add two years to the length of it.”

The rough visits never have them considering not coming back.

“Painful memories. But trying to heal tonight,” Foster said before the game.

“We had the lead going into the half and y’all whipped us,” he said of the 96-78 Tar Heels victory.

UNC didn’t whip his Tigers this time. But it still was a sad drive back to Charlotte.

Upstate media interest on the uptick

The South Carolina media representation for Clemson’s visit to the Smith Center was quite contrasting to the Tigers last visit two seasons ago.

On Dec. 30, 2015, UNC’s 80-69 victory over Clemson was played the night before the Tigers’ football team played in the Orange Bowl, a College Football Playoff semifinal game against Oklahoma.

Given that the Tigers were unranked and with a 7-5 record entering that 2015-16 season game, there were no newspaper sports writers or TV broadcasters from the Palmetto State at the Smith Center that night. The only reporter from an S.C. outlet was working for a website that covers Clemson sports, and he lives in the Triad.

Another reminder that there’s no doubt that Clemson is a football school. Understandably, most sports media in the state were in South Florida.

Fast-forward to Tuesday night, with Clemson ranked and the possibility of earning its elusive first victory in Chapel Hill? There were 11 South Carolina media representatives (including five newspapers) and, for the first time in the history of the Smith Center, six members of the media had seats in the upper level. That extra seating also might be used for the home games against N.C. State and Duke. 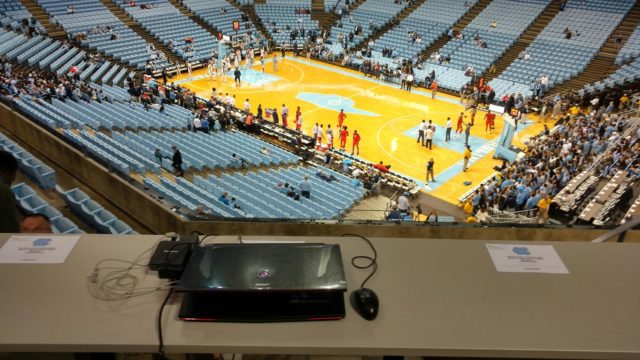 That South Carolina media contingent hoping to cover Clemson doing what Upstate brethren Wofford pulled off last month didn’t get their wish, though. But they’re used to it.

“Coach told us that Clemson had requested more tickets than ever and they thought that they were going to come in and beat us,” Berry said. “That kind of ticked us off a little bit and that’s why we had so much energy tonight to come out and play a good game. Even though we play them again in their place, it was good for them not to just come in here and end that streak. It kind of ticked us off a little bit.”

Speaking of media, the game featured 5 winners of 2017 national or state honors as awarded by the National Sports Media Association were on hand to work or enjoy Tuesday’s game. Long-time UNC radio play-by-play man Woody Durham was honored on the Dean Dome screens during the first half for his upcoming induction into the NSMA Hall of Fame (technically part of the 2018 class). Woody’s son Wes–who in addition to his work for the ACC Network is the radio voice of the Atlanta Falcons–was named Georgia’s Sportscaster of the Year.

On the writing side, News & Observer columnist Luke DeCock was on hand in case the Tigers made history–he was named N.C. Sportswriter of the Year for a second time, this time sharing it with N&O colleague and former UNC beat writer Andrew Carter. The Post and Courier of Charleston’s Grace Raynor (and UNC alum) and Scott Keepfer of The Greenville News, both on hand covering the Tigers, were named South Carolina co-Sportswriters of the Year. A full list of NSMA state and national award winners can be found here.

Biggest cheers of the night come when UNC students find out there are … no classes. I'll let you all come up with the punchline

The chant from students was an emphatic, “no school!” after getting an Alert Carolina notification a little after 8 p.m.

In the Tar Heels’ second straight home game, continuing a stretch of five of seven games at home, they welcome Georgia Tech. The Yellow Jackets beat UNC 75-63 in Atlanta in their only meeting last season, one of only four regular-season ACC losses last season.