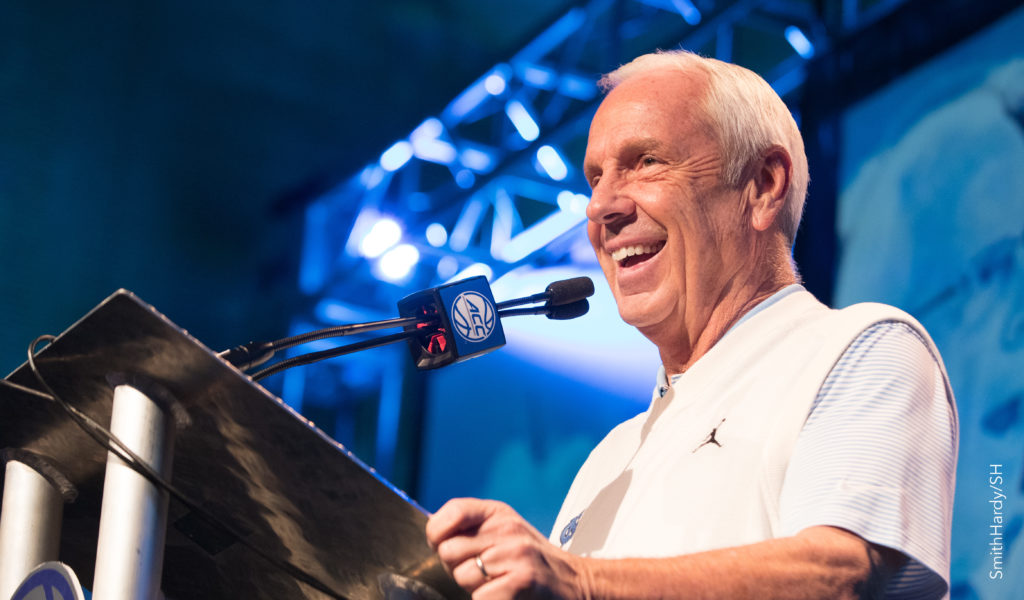 8 Things from UNC’s win over Bucknell

CHAPEL HILL — The history from North Carolina’s 93–81 victory over Bucknell was Coach Roy Williams’ 400th win as the Tar Heels’ coach, and his 200th at the Smith Center.

UNC just hopes that injury issues also become history before the basketball team starts following the frustrating path of the football team. This on a night that the Tar Heels sputtered a bit in the second half before holding off the Bison, which cut the lead to one with 12:38 left.

Just as point guard Joel Berry II made his season debut after injuring the pinkie and ring finger on his right (and shooting) hand, the Tar Heels found out that graduate transfer Cameron Johnson will miss four to six weeks.

“We hope we’ll get him back even quicker,” Coach Roy Williams said. “But we’re not going to push him.”

Johnson missed the opener against Northern Iowa with a sprained neck, then suffered a torn meniscus in his left knee Monday in practice. He had successful surgery Wednesday night and watched the game from his hospital room.

“He came to practice and did a nice job, fighting through the stiffness in his back and his neck and then he goes in to lay it up on a fast break play in a scrimmage and Seventh [Woods] came out of nowhere and blocked it … it was a big-time block,” Williams said. “Cam came down and his leg got buckled up underneath, so it looked ugly and it was ugly.”

Less ugly of an injury and of less concern is sophomore guard Brandon Robinson’s sprained right shoulder, which he suffered against UNI. He also missed Wednesday’s game.

In terms of minutes, it probably most affects Kenny Williams, who played 28 minutes without Johnson and Berry against Northern Iowa and 29 minutes Wednesday with Berry back (and would have likely played more if not for foul trouble). He has played more than 28 minutes only four times last season.

But, more than that, Williams has made more than two 3-pointers in a game only three times in his career and he made two against Bucknell. That won’t make up for the perimeter shooting punch lost without Johnson and it shouldn’t be expected from Theo Pinson (he has hit three 3s three times and was 0-for-3 against Bucknell).

If that perimeter threat expected from Johnson isn’t replaced by the healthy wing players, UNC will have to depend on consistent shooting from Berry and Luke Maye, who hit more than two 3s for only the second time in his career with three against Bucknell.

Absent that, the maturity of the freshman big men will be even more important since defenses will face fewer penalties for packing their defenses inside. The big men did well for long stretches against Bucknell.

Get used to a lot of different lineups with Johnson out. Roy Williams offered up plenty of combinations, sometimes of the odd variety.

“Monday’s practice is when it happened so there wasn’t a lot of time to see what’s going on and tonight it was just going on the seat of my pants who was going to sub where,” said Roy Williams, bemoaning that Pinson was the only true three man at his disposal on Wednesday. “So sometimes we had to go with Kenny at the 3 and I think one time we went with Andrew [Platek) at the 3.”

Roy Williams was a mix master after starting Berry, Kenny Williams, Pinson, Maye and Garrison Brooks. In the first half alone, every starter except Brooks played two positions, with Berry playing some at the two with freshman Jalek Felton at point guard and some with Woods at the point.

Maye played some at the five for the first time, being called on to do that a couple of times in each half. In the second half, that led Kenny Williams to have to try to rebound a missed Maye 3-pointer among the trees and that didn’t go well.

During one two-minute stretch of the first half, it was with Pinson at the four and Berry, Felton and Kenny Williams at guard. That group quickly started with a 6-1 run.

For a short stretch, Kenny Williams was out there with Woods and three freshmen: Sterling Manley, Brooks and Felton.

Rebounding and inside punch

Nothing makes Roy Williams smile more than good rebounding and nothing has him fuming more than when a big man misses a box out. He had much more of the former than the latter, even with the Bison’s 6-10 Nana Foulland to contend with.

Carolina showed Wednesday night that it’s at its best when scoring inside. After the Tar Heels scored only 36 of their 86 points inside against a smaller Northern Iowa team, they netted 24 in the first half when UNC was in control.

That changed for much of the second half when UNC’s ball movement wasn’t as good and it only scored 15 inside points. It went from a 26-10 first half rebounding advantage to only a 21-18 second-half edge.

Manley regained that inside edge, needing only 13 minutes of playing time to earn a double-double before finishing with 16 points and 13 rebounds in 17 minutes.

Little defense for the 3-pointer?

You could hear murmurs of dread from the crowd each time Bucknell put up a 3-point attempt toward the end of the game, and with good reason.

After UNC allowed Northern Iowa to shoot 46.4% from outside the arc in the opener, Bucknell connected on 39.3%.

The dread could get worse when Carolina faces Davidson in Charlotte next month. The Wildcats came two away from tying the NCAA record by making 26 in a win over Charleston Southern.

In pregame warmups, Berry wasn’t making many of his shots. And, after hitting his first shot of the game, a 3-pointer, he missed his last 10 shots.

It wasn’t a big surprise, considering that he’s only been shooting with his right hand for about a week and he still had tape over his pinkie and ring finger. But the rest of his game wasn’t bad, with six assists and only one turnover.

Another smooth game for Maye

You may remember the last time he scored in double figures in consecutive games: When he netted 16 against Butler and 17 against Kentucky in the South Regional semifinal and final.

And he’s also in good company. The last Tar Heel to score more than 20 points in the first two games of the season? Some guy named Tyler Hansbrough did it with 29 vs. Sacred Heart and 20 against Winthrop to start the 2006-07 season

Brooks/Manley/Huffman combined for 30 points (on 12-18 from the field, 6-7 from the line), 18 rebounds, and 4 blocks tonight. Suffice it to say, the freshmen bigs have exceeded my expectations through 2 games.