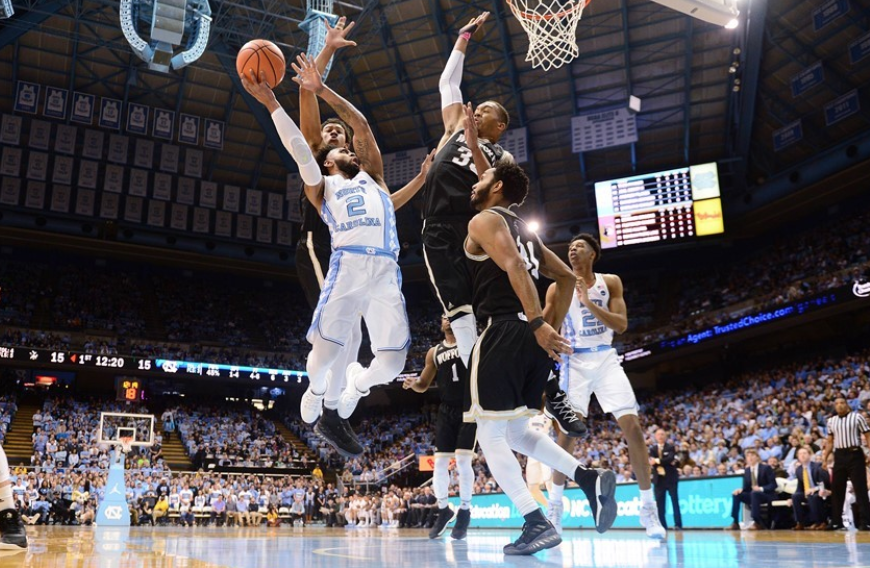 CHAPEL HILL — No. 5 North Carolina couldn’t weather extended stretches without a field goal — including the final 4:29 of the game — and a hot-shooting Wofford team. Poor late-game execution ended the Tar Heels’ 23-game home win streak with a 79-75 defeat Wednesday night.

It gave the Terriers their first win over a ranked team in 23 tries. For the second consecutive season, UNC fell to 10-2 with a loss in its 12th game. Last season it was against Kentucky in Las Vegas.

Were they “fat and happy”?

That was the view of Coach Roy Williams, and the Tar Heels can thank the NCAA rules for saving them from an early-morning practice.

“Thankfully we’ve got somebody that looks into the rules because I told them I wanted to come back and practice at 6 a.m. tomorrow morning but we can’t. You’ve got to give them eight hours off,” Williams said.

As you would expect after a loss like that, Williams showed his disgust at the effort and at his team’s ability to follow his instructions.

“We’ve got to by God be ready to play,” Williams said. “Not act like we’re prima donnas, we’re North Carolina and we can walk out there and the other team’s going to fold. That team outworked us.”

There weren’t any disagreements from the players, who no doubt got an earful from their coach after the game. But the team also heard a few words from Joel Berry after his 23 points — and seven consecutive UNC points in one stretch — weren’t enough.

“I’m the leader of this team, so when we lose a game like that or we go out there and play a game like that, I feel like it’s all my fault,” Berry said. “I never want to feel like that but I feel like I let Coach down because I’m an extension of the coach out there on the court. I just told the guys you have to buy into the system. We can’t think we’re going to beat teams just because we’re North Carolina. That’s just what happens when you have a young team.”

Kenny Williams, who was held to nine points and one 3-pointer, said that it was a question of effort.

“They brought the fight to us and we didn’t bring it back until our backs were against the wall and, at that point it was too late,” he said. “We didn’t make the plays we needed to make. The difference was the effort. They played a lot harder than us.”

Graduate transfer Cameron Johnson had been taking warmups before the last few games but finally was able to make his Carolina debut. He suffered a torn meniscus in his left knee in practice Nov. 13 and wasn’t originally expected to play until the end of December.

Johnson started in UNC’s exhibition victory Oct. 27 over Barton College, but came off the bench Wednesday and had an immediate impact. He pulled down an offensive rebound in his first possession and made a nice entry pass for a Garrison Brooks basket shortly afterward. He didn’t score but he showed a lot of court savvy as the Tar Heels outscored Wofford 17–4 in his six first-half minutes.

He only made one 3-pointer and finished with 10 points, three rebounds, an assist and a steal.

“I’m still trying to get my legs back under me and my arms back under me. This is something I’ll have to build off of,” Johnson said. “It’s tough on the body and kind of tough on the mind in the sense that you kind of have to rework yourself into the system. Kind of pick up on plays that you missed while you were out. Just learning a new offense and having a setback like that is a little challenging.”

Coach Williams intended to limit his minutes but ended up playing him for 17 minutes.

His debut may have offered a taste of what the rotation might be when he gets even more playing time. Johnson, who started instead of Kenny Williams in the Barton exhibition, replaced Pinson when he first came into the game. He later played with Andrew Platek and Pinson in a small lineup with Sterling Manley at the five, as Roy Williams played 11 players in the first 9.5 minutes.

When UNC fell behind by 14 in the second half, Johnson was on the court with four freshmen: Manley, Brooks, Platek and Jalek Felton.

The interesting lineup came midway through the second half: Maye as the only big man, with Johnson, Williams, Pinson and Berry. That lineup made it too easy for Wofford’s Cameron Jackson to score inside in the first half. That lineup returned with seven minutes left and UNC trailing 65-59.

“I think it is something that we can use going forward,” Johnson said. “It just requires an extra defensive and rebounding effort from myself and Kenny [and other wings].”

During some of those stretches Johnson was defending Wofford’s four man at times.

Magee made perimeter shots in all sorts of ways

Wofford sharpshooter Fletcher Magee came into the game leading the nation in 3-point shooting. After somehow missing all three shots in the first half while being harassed on defense by Kenny Williams and Theo Pinson, he found the range after halftime.

“I let him get loose too much,” Kenny Williams said of Magee finding the groove in the second half. “Too much open space. We saw before the game on the scout tape, he hit some tough shots and coach told us that he was going to hit some contested shots and he did. I gave him too much room.”

Clemson upstaged by another Upstate school

Clemson has played Carolina in Chapel Hill 58 times and is 0-58. Wofford, the Tigers’ fellow Upstate South Carolina school, did what Clemson has never done and it only took the Terriers four tries.

“Mountain top,” Wofford coach Mike Young said. “I grew up in Virginia and this was my team. Coach [Dean] Smith and see all those banners up there and I can think back to [John] Kuester and [Walter] Davis and [Phil] Ford and all those guys. And to bring a team in here, you know, not only compete and fight and do some really good things but win? That is a mouthful. A mountain-top experience and awfully proud of our boys.”

With Wofford’s second victory over an ACC team this season — it beat Georgia Tech at home — it became the first unranked opponent to beat the Tar Heels since No. 3 UNC lost at Texas on Dec. 12, 2015.

The Terriers also became the first team from South Carolina to win in the Smith Center. 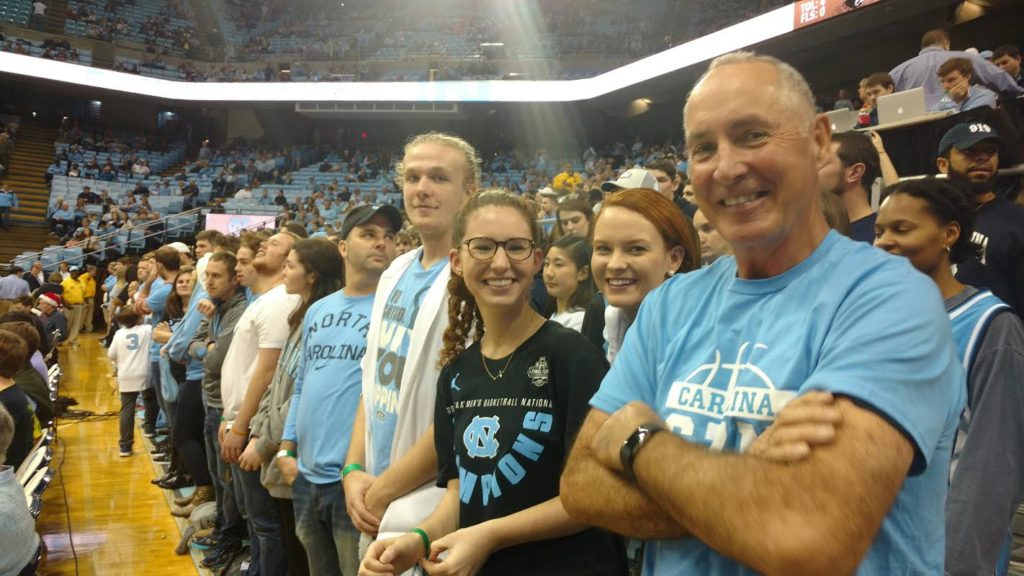 If you thought that some of the people in the student risers on Wednesday night were too old to be students, you weren’t seeing things.

With most UNC students already home for the holidays since final exams are done, UNC had its second annual Student for a Day promotion. Anybody at least 12 years old who is willing to stand and cheer for the duration of the game could stand in the risers for $60. A Carolina basketball T-shirt is part of the deal.

The promotion again fell on a Wednesday night. UNC sold 200 tickets for last year’s game, an 8 p.m. start against Northern Iowa. The 9 p.m. start this year may have something to do with the school only selling 100 tickets Wednesday for the risers, which can hold between 350 and 400 people.

Coach leading the dance team out?

It happens every home game: UNC’s dance team lines up near the floor-level portal at the Smith Center and doesn’t make its first appearance on the floor until Coach Roy Williams walks onto the court for the first time.

After he walks onto the court to loud cheers, throws a few T-shirts to UNC students and sits on the bench, that is the dance team’s cue to walk onto the court and line up in front of the scorer’s table.

Williams’ daughter, Kimberly, was a member of that same dance team when she was a UNC student.

Wofford (197) is the lowest Kenpom ranked team that UNC has lost to.