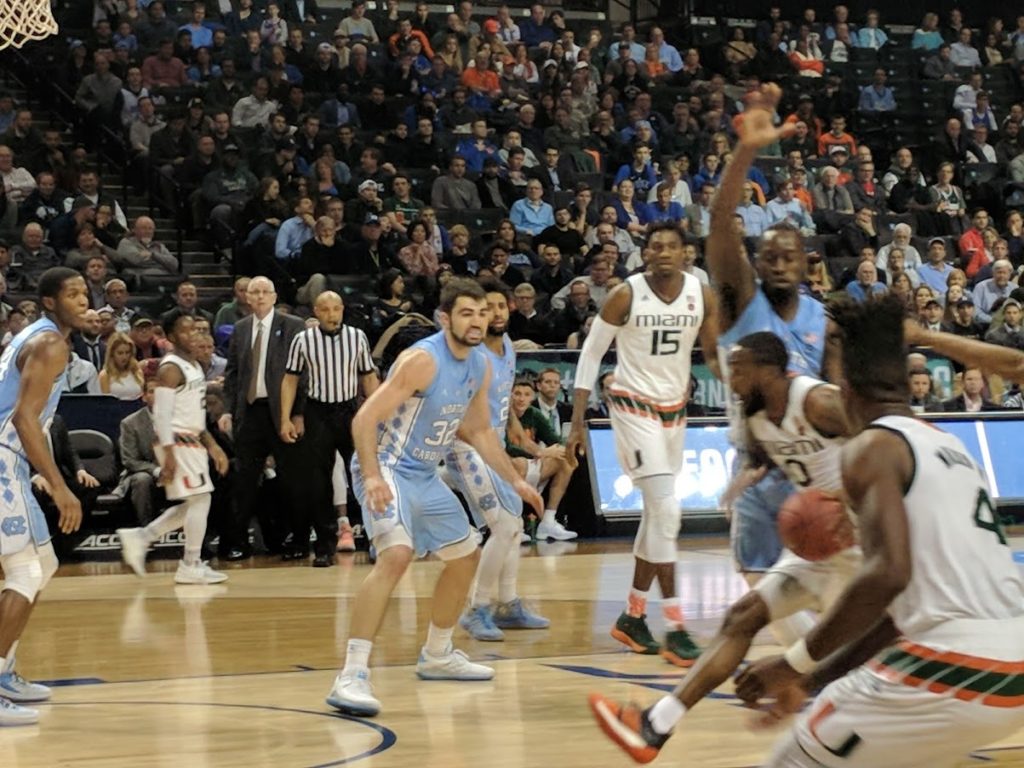 NEW YORK — With two of North Carolina’s best 3-point threats going through shooting slumps, the Tar Heels got the key perimeter punch when they needed it from an unlikely source.

Theo Pinson, the same guy who elicits groans from UNC fans when it looks like he is even thinking of attempting a 3-pointer, hit two big ones in the final minutes and added an emphatic, soaring dunk to add an exclamation point.

That pushed UNC out of survival mode and provided the needed cushion and momentum to take an 82-65 ACC Tournament quarterfinal victory over Miami on Thursday night at Barclays Center.

Pinson scored a career-high 25 points, his eighth consecutive double-figure game, and he pulled down 11 rebounds for his sixth double-double in the last 14 games. He’s been UNC’s best and most consistent player in the past few weeks.

Two seasons after having to crash postseason press conferences to be part of them, he’s become a fixture each game.

“I have the ball in my hands a lot, so I have the choice of shooting the ball or passing to my teammates,” said Pinson, who had three assists. “Of course, I would like to get it to my teammates — I love getting my teammates going. I have joy in doing that. But at the same time, if they’re not going to play me, I’ve got to be aggressive. That gets my teammates going. If I’m scoring, I’m a threat, so that means they have to guard me, too, and that just gets those guys even more open shots.”

Cameron Johnson, who missed a few minutes after aggravating a hip strain, says he knows only too well the dynamic with Pinson and the perimeter shot because he’s seen it as a teammate in the reactions of fans and as an opponent.

“In the ACC Tournament a couple of years ago when I was at Pittsburgh, he caught the ball at the top of the key and I was guarding Marcus Paige in the corner,” said Johnson, who had 13 points to score in double figures for the 17th time in his 22 games and pulled down seven rebounds. “He was wide open and I ran to him because it looked like he was about to shoot. He passed the ball to the corner to Paige for the 3 and I got pulled out of the game.”

He says that he’s always respected Pinson’s shot even if his Pittsburgh coaches or many fans don’t.

“It’s his senior season and I know he wants to go out on a really positive way and he gave us a huge lift today and he made plays from start to finish,” Johnson said.

Just like many times during Pinson’s recent MVP-like efforts, he made terrific decisions as a playmaker, got to loose balls and rebounded.

“We’ve tried to put the ball in his hands more consciously,” Coach Roy Williams said. “I think it’s been good for him.”

“… I think the way we’ve always tried to coach is have kids who will buy into being part of a family, buy into being part of a team, and know that when one guy is down, somebody has got to pick them up, and I think we’ve had that happen,” Williams said of the lift Pinson gave his team. “And I will agree with you, that may have been about as heavy a lifting as we’ve ever done.”

“It’s just senior leadership,” said Berry, who got most of his 11 points on drives to the basket. “He’s doing whatever it takes to be able to get a win and Theo is that kind of player. That’s what Theo does and when he’s out there playing freely, you can see what he can do.”

It will be the second consecutive year that UNC and Duke will settle the season series in a Friday semifinal matchup. It’s on the same night and location as last season. But there’s a role reversal and stakes are significantly higher.

UNC’s level of play also will have to be significantly higher Friday, particularly when you compare their quarterfinal game to Duke’s. While the Tar Heels struggled for most of the game, the Blue Devils rolled.

It’s the Tar Heels who are playing their third game in as many nights just as the Blue Devils were last year when, after the teams split the regular-season matchups just like this season, Duke won. Unlike last year, there isn’t room for both teams at the closest NCAA tournament pod when both got sent to Greenville, S.C.

Virginia has a lock on one spot in the Charlotte pod, and the winner of tonight’s game not only wins the season series but also might have an edge to be the second ACC team sent to Charlotte.

“It’s a big-time game. Everybody and their mama is going to be watching the game tomorrow. Everybody knows that,” Pinson said. “I’m going to be ready. My teammates are going to be ready. We understand we lost the last game, so that’s going to get us even more hyped up about it. But, at the same time, you can’t be bigger than the game. You’ve got to be settled down and just play.”

“Being able to play against them again, it’s going to be a great game, a fast-paced game,” said Berry, who missed a few minutes after hurting his left ankle. “This time, we have to make sure that in the second half that we come out and play and not just trying to come out in the first half and think we’ve won the game then.”

Last season in the ACC Tournament semifinals, Duke won 93–83 on its way to the ACC title in the Tar Heels’ final loss of the season before they went on to win the national championship.

“I remember I got in foul trouble and sat out most of the second half, came back with about five minutes left,” Berry said. “We had that game, we came out and jumped on them, and in the second half they just got going. Once they got going, it was just hard to stop them. We just have to make sure we play two good halves.”

If the Tar Heels miss their first 13 shots like they did against the Hurricanes again, the deficit might be more than the 14-0 UNC faced against Miami.

But, as with any UNC-Duke game, anything can happen.