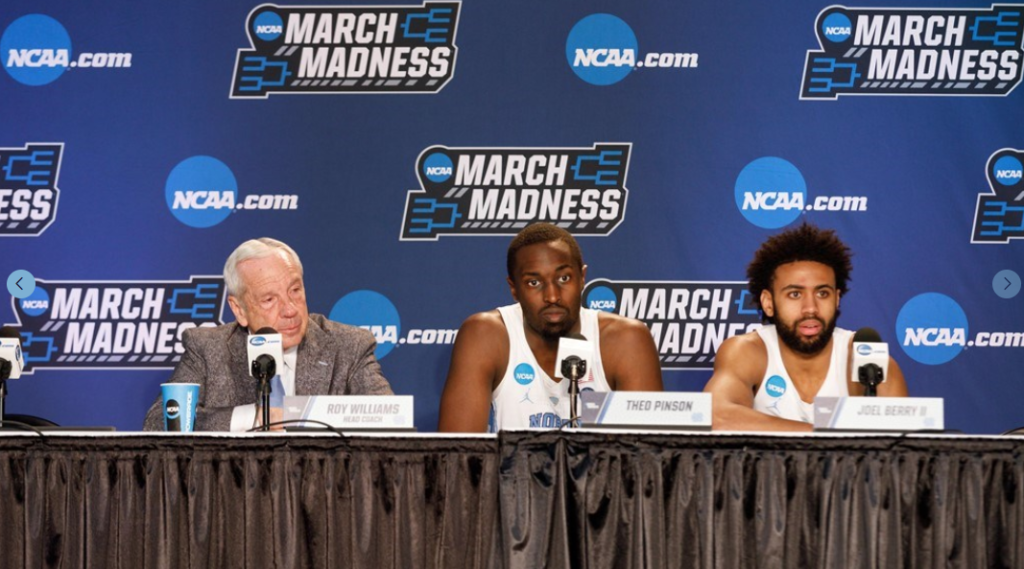 CHARLOTTE — For the second night in three days, the same Charlotte arena that will be host for the ACC Tournament next season turned into a house of horrors for an ACC team.

Two nights after Virginia became the first No. 1 seed to lose to a No. 16 seed, Texas A&M blew North Carolina out of the building, 86-65, Sunday night to put a crushing end to the Tar Heels’ hopes of repeating as NCAA champion.

It was the first loss in a second-round NCAA tournament game since an 85-83 loss to Iowa State in 2014. It was the worst NCAA tournament loss in the Roy Williams era, surpassing an 84-66 national semifinal loss to Kansas in 2008.

Both of those losses came in San Antonio, a venue the Tar Heels had hoped to revisit this spring.

Against the tall Texas A&M lineup, North Carolina’s route to victory figured to come from behind the 3-point line. Even when it was obvious it wouldn’t be the Tar Heels’ night from the perimeter, they kept tossing them up and kept missing.

“A lot of them were good shots, shots that we usually make,” said Kenny Williams, who made only one of his five 3-point attempts. “We’ve taken that many shots before. They just didn’t fall today.”

Williams’ score was Carolina’s lone first-half 3-point make out of 13 tries. The Tar Heels finished 6 of 31 for the game.

“I felt like we would have had to shoot better than we did,” said Cameron Johnson, who hit only one of seven 3-point tries. “If you would have told me before the game that we would shoot that poorly from behind the line, that’s a signal for trouble. A lot of them, back rim in and out. They all felt good. I’m sure every one we shot felt good, it just wasn’t our day to hit those shots. Sometimes that happens.”

A&M usually closed out the attempts well. But even when it didn’t and the UNC shooter was open, they just weren’t falling against the zone.

“I was surprised because we’ve handled some pretty good zones pretty well and we’ve shot the ball really well,” Coach Roy Williams said. “I’ve always talked to you guys about having great balance. I thought that was the most important thing on the offensive end is being able to score inside and out. We’ve been way too far to the perimeter shot.”

When UNC tried to drive, many times a shot attempt got blocked. And, when shots went up, UNC couldn’t get second chances. The Tar Heels rebounded only nine of their 42 misses and scored only six second-chance points.

“I thought the looks we got were good looks,” Johnson said. “They had a lot of guys in the lane, we’d go crash and they came out with the board and we didn’t. Maybe, looking back, we should have hit the boards harder and try to push them around.”

What hit everybody hard is the reality that the careers of Joel Berry II and Theo Pinson are over.

“I wish it wasn’t my last time,” said Berry, who was the only Tar Heel to make multiple 3-pointers (he was 2 of 10), and finished with 21 points and five rebounds. “I’ve had so much fun here and I really felt like coming to North Carolina really turned my life around and changed me into a young man.”

Pinson went out with numbers typical of his senior season other than the four points: 11 assists and seven rebounds.

“The main reason I’m not crying right now, is because I’ve really enjoyed my time,” said Pinson, fighting off the obvious emotions. “I came in every day with a smile on my face, wanted everybody to have a smile on their face, even on the lowest of lows when we were going through stretches where we were losing and [I] always came in to try to be that spark as far as putting a smile on everybody’s faces.”

Kenny Williams will get another chance at a March run but had a tough time dealing with the fact that Pinson and Berry will not.

“I hate that they had to go out like this,” Williams said. “I’ll always feel like I could have done more. That’s was it. You can’t really put the words or measure the pain that you feel right now.”

The final minute of the Syracuse-Michigan State game was on the arena’s big screens. But fans in the arena couldn’t see the finish (unless they watched on their phones) because it was taken off in the final 20 seconds after a timeout.

The crowd, which had been cheering for the Orange, booed loudly when the game was taken off the screens to proceed to the starting lineups.

Also missing out? Former Georgetown coach John Thompson, who was the analyst for Westwood One’s national radio broadcast. He knew I was watching on a computer and turned to me when it was over to see who won. When told that Syracuse won, he shook his fist in triumph. Old Big East loyalties?

Hoo to thank for cheaper tickets?

The prices never are going to be low when the Tar Heels are playing NCAA tournament games in North Carolina. They may have dipped a little lower since Virginia was upset, leaving its many fans as sellers.

The price bottomed out at $54 mid-afternoon Sunday afternoon on StubHub before shooting up to $69 a couple of hours before tipoff.

Remember how Virginia fans made the ACC Tournament championship game in Brooklyn feel like a Cavaliers home game? That price would have been much higher had the Hoos not made dubious history.

What’s the name of the event? 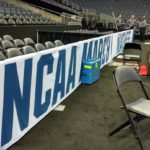 The official name of the tournament is the “NCAA Championship.” But the NCAA has gone so deep into the “March Madness” branding that you won’t find or the word “championship” — or “tournament,” for that matter — mentioned anywhere in signage inside the arena. 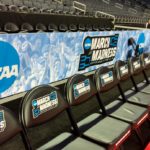 The exception is the label at the top of the huge bracket banners in the press area.

So, the madness of the wide use of the cliché isn’t going to slow down anytime soon. With the NCAA’s help, it’s only going to get worse.

All the Texas A&M cheerleaders have the number 12 on front and back of their uniform tops. Why 12? The 12th Man is a huge part of football games for the Aggies. 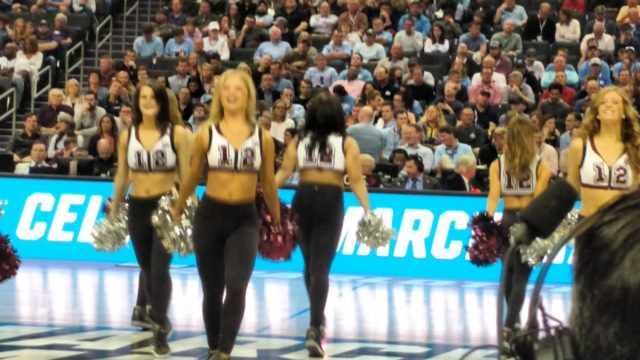 In a tradition dating back to the 1920s, under the 12th man tradition, A&M students stand during the entire home game for football and basketball. The tradition doesn’t appear to hold outside of College Station. The students stood some but not for all of the game.

This is the Texas A&M team we expected to see all year. Injury and suspensions derailed this big and talented team. The Aggies have it together now.

Aggies haven’t been kind to UNC

The Tar Heels fell to 0-2 against Texas A&M in the NCAA Tournament, both second-round games.

What made that defeat particularly frustrating for UNC fans is that it marked the third consecutive season that the Tar Heels had lost their first game. In 1978, Phil Ford’s senior season, UNC lost to 68-64 to San Francisco in Tempe, Ariz. In 1979, it was the infamous Black Sunday loss in Raleigh’s Reynolds Coliseum to Penn 72-71 on the same court where Duke fell to St. John’s 80-78 in the second game.

The Tar Heels haven’t lost their first NCAA tournament game in any season since that 1980 loss to the Aggies.