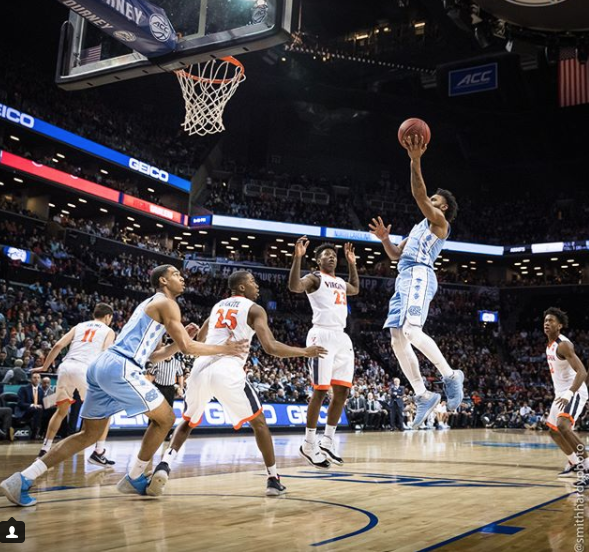 NEW YORK — Even when it’s going well, facing Virginia is a torturous test.

North Carolina hung on for so long and came close but could never erase its second-half deficit. When the Tar Heels made mistakes that they were able to survive against Duke a night earlier, the Cavaliers instead took out the dagger and put the game away.

Virginia methodically made plays and big shots in the final minutes as the Tar Heels’ four-day run came to a frustrating conclusion with a 71-63 loss to No. 1 Virginia in the ACC Tournament championship Saturday at Barclays Center.

“We had them. We had them,” Pinson said. “We just didn’t make the plays at the end.”

Now UNC waits for the NCAA tournament field to be announced Sunday to see if the win over Duke is enough to get the Tar Heels sent to the Charlotte pod instead of the Blue Devils.

Battle-tested seniors Pinson and Joel Berry II did their best to get the mindset of the team right.

“We’re going to learn from this,” said Pinson, who only scored four points but had six assists and eight rebounds. “Me and Joel told the guys when they came in to keep your head up. It’s for all the marbles right now. You lose, you go home and we just need to play as hard as we can and we’ll be all right.”

The other good news is that the Tar Heels (25-10) probably won’t have to face Virginia (31-2) again unless they make a deep NCAA run. And they won’t have to play four consecutive days.

“It’s not playing four days in a row that’s hard, it’s playing Virginia on the last day, and they deserved what they got,” Coach Roy Williams said. “But my team is getting better. We’ve got some bigger goals in front of us, and we’ll need to get back to work this week after giving them some rest.”

It’s hard to say which end of the court frustrated UNC the most: the grind on defense or the offensive challenges created by Virginia’s torrid defense. The Cavaliers forced UNC to play defense for nearly the whole shot clock only to sink a basket many times when the clock was about to run out.

“They make you guard for 30 seconds most possessions and they really don’t make anything easy for you,” said Kenny Williams, who scored 12 points and had the daunting task of guarding Kyle Guy. “You really can’t get anything easy on the offensive end, so you have to just keep your poise when that comes up and stay patient with the team and with yourself.”

Guy, the tournament MVP, scored 11 of his team-high 16 points in the second half. Many of those points came despite being closely guarded.

“I think he was just more aggressive,” Williams said. “First half, he was coming off the screens, he wasn’t really curling them tight and going into his shot. The second half, he just got more aggressive and a lot of the time I was there. He’s a big-time player so he was making shots.”

In the final minutes when UNC badly needed a stop to cut the lead down, Virginia used much of the shot clock, got the rebound, and proceeded to run another 30 seconds off the clock.

Carolina was missing a dangerous perimeter threat in the final minutes because Cameron Johnson had to sit on the bench battling back issues. His fall against Miami caused hip issues to flare up and the back problems came up as he continued to play. When he took another fall Saturday, his hip and back were in pain. He went through lots of rehab in the last 48 hours but playing four consecutive nights made it difficult.

“The clock just drains when you play them,” said Johnson, who had four points and no 3-pointers in 32 minutes after scoring in double figures in each of the previous three tournament games. “That’s kind of the grind you have to encounter when you play them. You have to play possessions out. Every possession matters just a little bit more. You’ve got to make shots on your end and stop them from making shots on their end.”

Virginia took Carolina out of their normal transition game, which forced them to deal with the pesky half-court, pack-line defense. The Tar Heels combined for two fast-break points in the two losses to Virginia, both coming Saturday night. In both losses, UNC only had only three points in each game off turnovers.

Once in a half-court set, it was a difficult to get any open shots.

“Personally, for me is not making driving angles that you can get to,” Pinson said of what most frustrates him about Virginia’s defense. “At the same time, they make you work for everything you get. They make you work and you have to move the ball as fast as you can. You’ve got to knock down shots.”

Maye knocked down plenty of those in scoring 15 of UNC’s 30 first-half points. But he could only score five in the second half to give him his first 20-point-plus game since hitting 33 at N.C. State.

“With them and how they play, the slow pace that they have, it does kind of put pressure on you to think that you have to go down and take a quick shot and try to get that lead back in one possession, and that’s where they take advantage of teams,” said Berry, who scored 17 points. “And then, next thing you know, you take a bad shot, and then you’ve got to go back down and play defense for 30 seconds again, and then now you’re like, ‘Oh, dang, we really have to get it going now.’ ”

That’s the frustrating cycle that allows Virginia to seemingly get into the heads of its opponents and the reason it will be the top overall seed when the NCAA field is announced Sunday.

“You’ve got to make every offensive possession be a good one, all right, because they’re going to make you work defensively,” Coach Williams said. “If you go down and slop up a quick shot, now you’ve got to go back and defend, and you might have to defend for a long time.”

The Tar Heels are just thankful that none of these sorts of opponent issues will be in their immediate future.