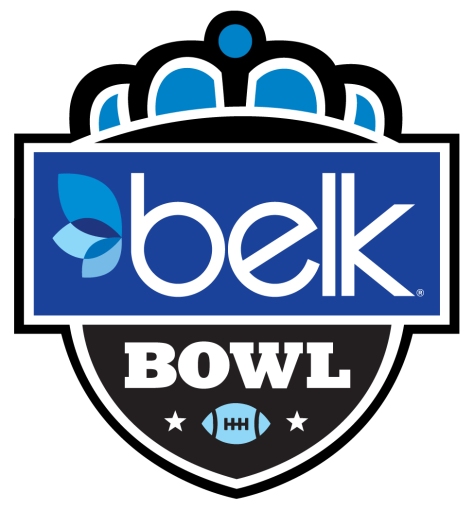 Today friend of the network, CBS Sports.com College Football/Basketball scribe,  and native North Carolinian Chip Patterson weighs in on why we love the Belk Bowl.

The Belk Bowl isn’t just a reason to be thankful for sports here in North Carolina, it’s an indication of how far we’ve come and where we’re going.

Technically, the Belk Bowl has been in existence in 2002 thanks to Raycom-powered efforts to bring a bowl game to the state of North Carolina and scout potential targets for conference realignment for the ACC. League officials and bowl organizers will argue that last point (because I made it up), but note that Boston College, Pittsburgh and Louisville (who has played the game as a Big East and ACC member) all joined the ACC after playing in this bowl game.

In terms of events around the game, the Belk Bowl (and most of its previous iterations) did a great job recognizing its surroundings in NASCAR country and the opportunity to offer a unique experience to the players. Some of our the game’s largest and fastest young men squeeze into stock cars and get to feel even larger and faster while going hundreds of miles per hour at Charlotte Motor Speedway.

The inclusion of area schools has made it easy for North Carolinians to develop an early fondness for the Belk Bowl. All of the Big Four have made at least one appearance and sources have told SportsChannel 8 that, historically speaking, a North Carolina school is involved 61.5 percent of the time. But these days the Belk Bowl has more of a national draw than those early Continental Tire Bowls.
Both the ACC and SEC had to give up the Peach Bowl in the creation of the College Football Playoff, and that’s when our khaki-clad heroes pounced at the opportunity. No longer just a meeting between local ACC schools and a Big East visitor, the Belk Bowl is an established battle ground (at least until 2019) for the never-ending ACC-SEC turf war in the southeast.

Keeping an eye on the future is what allowed the Belk Bowl to emerge from the local spotlight and into the national spotlight, even getting to add an opening weekend kickoff game. That foresight has been evident with the game’s moves in the business of the college football and in the super serious business of bowl game Twitter accounts.

No bowl game brings the heat 140 characters at a time like the Belk Bowl. No one.

Keys to tonight’s Auburn vs Kentucky game: 1) Teamwork 2) Electrolytes 3) Sportsmanship 4) Fashion Who do you think will win and why?

How is your team doing so far?

I could reach back for months into @belkbowl’s greatest hits but when you are following the game’s lead to live with a certain modern and southern style you have to continue reinventing yourself, and @belkbowl brings that energy with every new message dropped into your timeline. Or better yet, interact with the Belk Bowl. Chances are you’ll get a great response that will brighten your day.

What was an upstart Big East-ACC bowl game is now an annual ACC-SEC battle ground and the good folks at the Charlotte Sports Foundation (who also oversee the ACC Championship Game) have recently entered the hustle of bidding for title games. Like North Carolina, the Belk Bowl has gown a lot in the last 13 years.

It’s Modern. Southern. Football. And we are so thankful that it’s right here in the state of North Carolina.