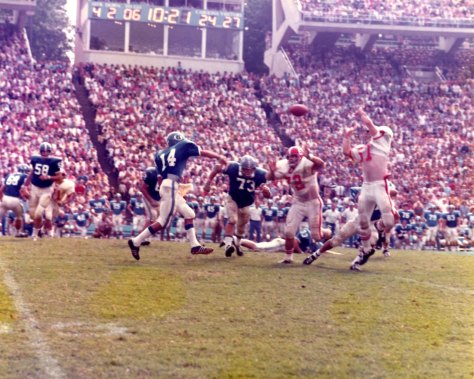 Today, SportsChannel8 Director of Gaming Services Josh Goodson looks at the ebbs and flows of the NCSU-UNC football rivalry over the past two decades.

Also, use #FeedTheRivalry on social media all week to help support a good cause while hyping up Saturday’s game.

That is the overall record for the UNC-NC State football rivalry. 65 of those wins are credited to UNC. 33 to NC State.

UNC has won 62.5% of the game between these two teams. You would almost even think with a record like that, this game isn’t even really a rivalry.

Au contraire mon frère. I think that’s a proper time to use this.

Sure this isn’t the Iron Bowl. Or the Apple Cup, Florida State-Florida, “Big Game”, Red River Shootout (Yes I’m calling it that). This game rarely makes the national radar as a game that will affect conference championships. But just because there isn’t a catchy name or large stakes, doesn’t mean the hate isn’t there.

What has changed in this game is the hate involved.

A little background for the purposes of illustrating where I sit in this rivalry. Like many native North Carolinians, which team I pull for and why is not always a simple explanation. I grew up an NC State fan. Both my parents went there, as did many close relatives. In my extended family, 2 people graduated from UNC. I grew up going to NC State football games with my family. The most shocking thing that could have happened was if I went to UNC.

I tell that part not to out myself as a State fan growing up. I tell it to explain that I know the hate that State fans have for UNC. I get it. In my lifetime, UNC has far been the bigger and better brand across all sports (especially basketball). Of course I grew up hearing about the 1974 and 1983 NC State hoops teams. Basketball has always been king in this state. So growing up as a State fan in the ‘90s, when it came to playing UNC, you basically held hope on the football team to possibly beat UNC so you could that one moment a year you could talk junk.

Ok, back to the original piece. State fans have longed hated UNC. I’m not going to delve into the why. Many UNC fans will say “It’s not a Rivalry. It’s their Super Bowl. Our rival is Duke.” Well things have changed in the last 20-ish years. This football game has brought on a whole new meaning.

In my eyes, this football rivalry took on a new meaning in 2004. AKA the “TA was In” game. This game was during the “revival”, I guess is a decent term, for the NC State football program. This was post Philip Rivers, but NC State had arguably taken over as the better program in this rivalry.

Of course the game had to have layers. Not only was TA McClendon not ruled in, in an era where replay didn’t exist, but the head referee that game had been brought back to life by UNC. Yes, you read that right. The head referee that evening was Jim Knight. Knight had suffered a heart attack 7 years earlier during a UNC/UVA football game. Knight was able to be treated that evening at UNC hospitals. State fans somehow found this out and didn’t forget. Begin the conspiracy and let’s also raise the hate while we are at it!

That game didn’t necessarily add any to the “UNC hatred of State” angle, but whew thanks to the internet and “still photos” and message boards, the hate started to bubble.

Always in the back of the mind of State fans, this game lacked some pizazz the next few years as both teams changed coaches.

Wilson finished his career vs UNC at 3-0. This included one blowout and one game which featured the infamous “2 yard hail mary”.

The year of the “2 Yard Hail Mary” ended up bringing the rivalry to where we are today.

The year was 2010. UNC started the season with big aspirations under Butch Davis that quickly unraveled after Marvin Austin tweeted lyrics from a rap song. The Tar Heels ended up having a NCAA cloud hanging over the head of a team that was built for a breakthrough, to end up losing on a heartbreaker to Russell Wilson and NC State.

Since that game, we’ve been privileged to see a war of words between coaches, a Gio Bernard return for the ages and a surprising beatdown.

Besides the on-field results of recent years, this football rivalry has grown into something more.

Georgia and Georgia Tech call their rivalry game “Old-Fashioned Hate”. Maybe this should be “New Fashioned Hate”. You would be hard pressed years ago to find a UNC fan that would utter comments about wanting to beat State.

It was long said that UNC fans only want to beat Duke every year in football. That still may ring true. I dare you though to find UNC fans that wants to make sure they don’t lose to State every year even more.

This coming Saturday we will have the 105th edition of the NC State/UNC football rivalry. And this Saturday will mark the first time that one team still has College Football Playoff aspirations. This coming Saturday in Raleigh may end up being the college football game featuring the most combined hatred in all of football.

See you at Carter-Finley.