After a few days of training camp, the Charlotte Hornets kicked off their 2018 preseason schedule in Chapel Hill. Playing in the Dean Dome for the first time in over a decade, Charlotte grabbed a 104-97 win over Boston, which included a 39-point third quarter (1.25 points per possession).

It’s just one preseason result (September basketball, baby!) and the starters didn’t play huge minutes for either team; to draw too many conclusions would obviously be ridiculous. However, I was at the Smith Center for the event and came away with a few observations from the advent of the James Borrego era.

Let’s dive in, starting with MKG.

For the first six seasons of his career, Micheal Kidd-Gilchrist has been a bit of an oddity — a wing that didn’t shoot three-pointers. At times, it’s caused serious spacing issues for the Hornets; although through his ability to cut and knock down the occasional midrange jumper (and Kemba Walker’s brilliance), they made it work.

It always felt like the Hornets could instead try to leverage his tools was a small-ball 4. Steve Clifford was reluctant to do this; last season, MKG played just 141 possessions as the de facto power forward, per Cleaning The Glass.

Enter James Borrego. A few minutes into the first quarter against Boston, MKG was the first sub off the bench — replacing Marvin Williams at the 4.

In 22 minutes of action, MKG spent essentially all of his time on the floor playing the 4; when lined up with the rookie Miles Bridges on the floor together, the two forwards essentially functioned as 3.5’s. Charlotte used them interchangeably and a switch partners. While on the floor, MKG snagged 12 rebounds — a defensive rebound rate of nearly 35 percent.

If he can continue to effectively clean the glass, this becomes something to seriously monitor. You know he’s going to play hard. Plus, it frees up Borrego to start Nic Batum at the 3 and Jeremy Lamb at the 2, while adding to the bench’s defense and glass game. And with more shooting around him on offense, MKG could have more room to attack defenses in the half court — sharp cuts and freewheeling drives to the hoop.

This development is interesting, too, because if MKG is ready to serve the majority of his minutes at the 4, Willy Hernangomez continues to do his thing (slip/dive, DHO, offensive rebound) at the 5 and Frank Kaminsky struggles with his confidence level and shot, then the way minutes are divvied up is worth keeping an eye on. Could Frank lose his rotation spot if he can’t consistently stick those wide-open above the break three-pointers? (He was 0-of-4 on 3PA vs. Boston — all from above the break.)

2. Miles Bridges will create a few posters this season

Well, it certainly didn’t take long for Miles Bridges, the lottery pick out of Michigan State, to make an impression, did it? After a mostly quiet first half, which included one catch-and-shoot corner three (the stroke looked good, by the way), Bridges took flight with under six minutes to play in the game.

A few minutes later, he was back at it again — GODDAMN DUDE, DON’T HURT NOBODY.

Bridges finished with four field goals — these two monster put-back slams and two three-pointers. Those are the money areas on the floor. He also put the ball on the deck, drove right, created some contact and get to the free throw line on one second-half possession, too.

It’s super early for this guy; he still has a ways to go. But there’s a lot of talent here, and he’s going to do some stuff for Charlotte in the 2018-19 season. (I liked what I saw in the second half with MKG and Bridges on the floor together.)

This is quietly one of the best player-development success stories in the NBA: Jeremy Lamb, Oklahoma City outcast, turning into starter in the NBA.

Even in Charlotte, it certainly didn’t happen overnight; J-Lamb spent most of his first two seasons with the Hornets in and out of Steve Clifford’s rotation. Lamb provided cost-effective scoring pop off the bench, but his defensive mishaps frustrated Clifford; in turn, he was frequently pushed to the fringes of Charlotte’s rotation.

Last season was different, though. In 2017-18, Lamb crossed the Rubicon on becoming a consistent NBA piece. The defense was style iffy at times, but Lamb ranked third in the East in bench scoring (12.1 points), and shot a career-best 37.1 percent from downtown (4.6 3PA per 36 minutes) — including 45 percent from the corners and 38 percent off the catch. Those are solid numbers.

When it was announced earlier in the day on Friday that Lamb would start at the 2, it drew some minor waves on NBA Twitter: whoa, the Hornets are going with a little more pace and space this year, huh?

It makes sense — with Batum wanting to play the 3, MKG (or Marvin) has to get bumped to the bench. Lamb is the obvious fill-in next to Kemba in the backcourt, although Malik Monk is a tantalizing option here, too.

With a first five of Kemba, Lamb, Batum, Marvin and Cody Zeller (a group that played just 94 minutes together last season), the Hornets can space it with four shooters, two excellent pick-and-roll scorers and a great screener in Cody.

This was just one preseason game, but Lamb looked excellent in Borrego’s new uptempo offense — 15 points on nine shooting possessions, with everything at the rim or from beyond the arc. Lamb was featured in early action against Boston, looking to attack out of drag screens or side pick-and-rolls, including one drive when he slipped a nice pocket pass to Zeller for a bucket at the rim. 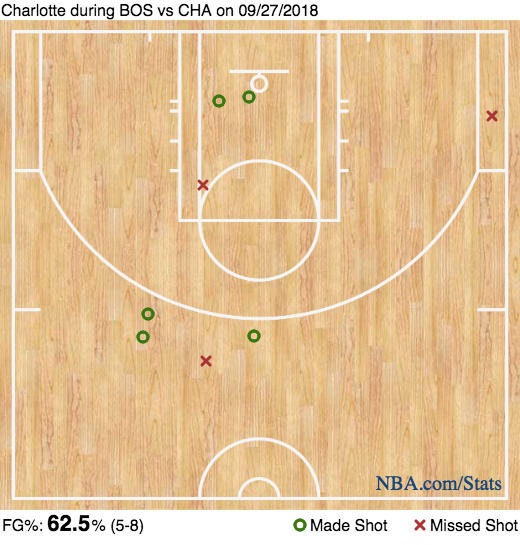 For his NBA career (over 7,000 minutes), Cody Zeller has attempted just 16 three-pointers (less than one percent of his career FGA), making only four. That’s it. The lack of a perimeter jump shot — or a post game — hasn’t hindered Zeller’s offensive impact. Over the last three seasons, the Hornets have been significantly better with Cody on the floor.

With the arrival of Borrego and a new system, there was some speculation of Zeller — who has flashed a very limited midrange game (30 FG% on long midrange FGA over the last three seasons) at times in his career — would extend his range out to the three-point arc this season.

Again, let’s not draw too many conclusions from one preseason game, but Zeller ran a little pick-and-pop action in the second half with Batum, and splashed a no-hesitation three-ball. I doubt this will become the norm in Charlotte; however, if Zeller can space defenses out to the arc even a little bit, it opens so many more doors for this team on offense.

5. Get Ready: The Celtics are Awesome

Boston played its starting lineup for only a few minutes in this game but, my god, Kyrie, Hayward, Brown, Tatum and Horford — with Brad Stevens pulling the strings — is ferocious. This will almost certainly be one of the best high-usage lineups in the league this season. Plus with a bench that includes Scary Terry Rozier, Marcus Smart and Marcus Morris, this team is just absolutely loaded.

The Celtics have shooting, playmakers, passers and rangy/multi-positional athletes that can defend like crazy. They can basically switch everything on defense, and on the other end of the floor counter switches. Kyrie will roast helpless big dudes with wipeout crossovers; Horford will punish smaller defenders on the block, or shooter over centers that can’t recover quite quick enough to a pick-and-pop three; Brown, Tatum and Hayward are all studs, and can post up or score in isolation.

This is one of the three or four best basketball teams on the planet right now.I like the Celtics to come out of the East. However, if well-known chuckle monster Kawhi Leonard is 100 percent up in Toronto, all bets are off.