So Florence is a Category 4 Hurricane located about 850 miles southeast of Cape Hatteras. It’s moving WNW at 15 mph and has sustained winds of 130 mph. It has weakened a bit overnight, but that’s mainly due to internal fluctuations. She’s still a bad mother.

Any changes to the timeline?

Not significant ones, really. NHC still pegs the most likely arrival time of tropical storm-force winds to the coast of NC by Thu morning and central NC by Thu afternoon/evening.

Alright, so there’s a little of that. Recent model trends indicate that the storm will begin to stall as it nears the NC coast. Once it does so, it’ll weaken a bit due to its close proximity to land. So winds inland may be weaker than expected.

F’n awesome. I was so worried th-

Well, there’s bad news with that, though.

So the longer Flo hangs around the coast line, it’s just going to keep pumping rain into the state. I’m talking buckets. Biblical flooding. It’s hard to know exactly where the bullseye of heaviest rainfall totals will be, but some areas could be looking at as much as 20″ of rain over a couple days.

So why has it changed?

An area of high pressure is expected to develop over the Upper Midwest and significantly reduce Flo’s forward momentum. There are significant model deviations beyond 72 hours, so it’s still too early to tell exactly where she’ll end up. However, the storm is so massive, its impacts will be broad and far reaching. Dangerous conditions will extend far from the center of the storm.

What do the models say?

Well, a lot and a little. See the tight clustering of the the lines early that becomes more widespread later? That’s the influence of the ridging later in the forecast. Makes the track difficult to pin down. 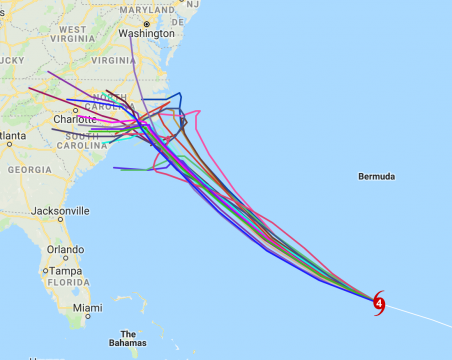 So I went and got beer, batteries, vienna sausages, and some sparkling deer park water because it was all they had left. Am I good?

Depends on where you are. If you’re near the coast, heed any evacuation orders. Better to be safe than sorry. If you’re a bit farther inland, areas that typically flood during thunderstorms will likely be inundated significantly with Flo’s rainfall. Make those necessary preparations. Tie down any huge loose objects in your yard or find somewhere for them to go.

This is a dangerous situation as it’s unfolding at this time. Changes can happen, but better to be prepared for the worst and hope for the best.